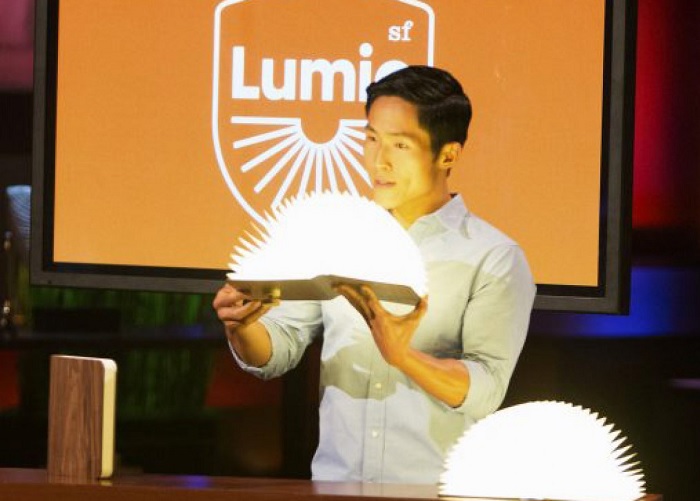 Lumio founder Max Gunawan, from San Francisco, was an ex-architect with an inventive streak and a big project in mind. He was attempting the tricky task of designing a modular home that was capable of being folded flat into a compact car. Max was more than equal to the task when it came to the engineering challenges involved, but the capital required to build the prototypes for the entire house was far beyond his budget.

He decided to take the concept and reduce the scale of it to a folding lamp alone, Max had a habit of jotting all his ideas in a notebook so it was a natural progression for him to give the lamp the form of a notebook. The idea behind Lumio was born, but in order to get the business up and running Max turned to the crowd funding site Kickstarter in February 2013. He was initially seeking $60,000 funding from Kickstarter, but his well-designed campaign perfectly highlighted the cool and stylish Lumio, and the campaign was a huge success. Within 48 hours $80,000 had been raised, and by the time the campaign came to a close, one month later, Max had achieved funding of $578,000.

The Lumio business was off to a flying start. Max used the funding to complete the manufacturing process, during which he even spent four months at the production facility in China in order to make sure everything was perfect. He was rewarded well for his efforts, sales in 2013 were $1 million, without any great expenditure on marketing, instead the simple beauty of Lumio sold itself, and word of mouth alone was sufficient to expand sales gradually. The follow year sales were on track to more than double, and demand was becoming greater than Max’s supply. In order to scale up the business Max needed more capital and a strategic partner, Shark Tank was an obvious next step and after a successful application process, he eventually got the opportunity to pitch to the sharks in late 2014.

When Max appeared in the tank, he was hoping to get a $250,000 investment in exchange for 8% equity in the Lumio business. The sharks looked a little dubious as Max mentioned the 8% equity figure, they are generally unfavorable to low equity deals, but within a few seconds they began to see the light.

Describing Lumio as an ‘Elegant Lighting Solution’ Max opened up the Lumio and his face was bathed in a majestic white light, the effect was almost magical.

Daymond John’s eyes widened in wonder and the other sharks were spellbound as Max continued. He demonstrated the ability to turn the book into a 360 degree light, and its directional lighting capabilities, while he pitched his unique product the sharks were as silent as a group of tired toddlers watching The Lion King. He ran through the super strong magnets that could attach to Lumio to any metallic surface, whether horizontal or vertical. Mark Cuban commented ‘It’s cool’ while Robert Herjavec thought the Lumio was ‘Beautiful’, the other sharks were silent, but they were just as impressed.

Kevin O’Leary inquired about the battery life of the product, Max told him the battery would last for up to 8 hours and could be charged via a USB lead. He explained about the million dollars worth of sales in the first year of business, all without any marketing and Daymond asked how that had been achieved. Max explained about his phenomenally successful Kickstarter campaign, and the large amount of sales he had achieved with it. When Max revealed that his target had been only $60,000, yet he had raised over half a million dollars from the campaign, the sharks were visibly impressed.

Robert asked about the retail price. Max told him that the Lumio sold for $190, yet cost only $65. He told the sharks about his four month stay in China, to oversee the production process at the manufacturing facility there, and explained that it had enabled him to lower the cost per unit from $80. He also informed them he was hopeful of lowering the cost per unit to $50 in the future, if he could get a deal with a shark.

Mark Cuban asked about the sales strategy of the business so far, and Max disclosed that he had primarily stuck to Museums, and smaller independent design stores so far, yet was still beginning to have problems keeping up with demand.

Lori Greiner asked the entrepreneur about his future plans. Max showed the sharks the prototype of the new ‘mini’ Lumio. It was small enough to be able to fit easily into a pocket, was ideal for outside and could also re-charge mobile devices, which hit a big note of approval from all the sharks.

Kevin O’Leary asked about the projected sales figures for the current year. Max told him that he expected to hit over $2 million in sales, as a conservative estimate, $2.5 million was a more likely figure.

Robert told Max that the Lumio was beautiful, it brought a smile to his face and he was impressed with Max’s commitment and drive, particularly as he had spent months overseeing the production in a Chinese factory. Robert asserted that he shared the vision, thought the valuation was fair and he had an offer to make. He would provide the required $250,000 investment, in exchange for 10% equity.

Max graciously thanked Robert for his offer, but there were more to come, a lot more.

Kevin was interested, and he had one of his characteristically unusual offers for the entrepreneur. He would give Max the $250,000 as a loan. He would take a $7 per unit royalty until $500,000 had been repaid, and then take just 4% equity. As an afterthought he offered to finance purchase orders for Lumio too. Kevin announced the other sharks were brain-dead while he was creative, he emphasized his offer valued Lumio at over $6 million, yet Max’s own valuation had only been $3.1 million.

Mark Cuban inquired what sales channels Max wanted to focus on. Max confirmed that E-commerce sales were his priority, as they had the greatest profit margin. Mark Cuban admitted he was glad to hear that, his own strength was E-commerce and he had a third offer for Max to consider, he would offer $500,000 in exchange for 16% equity.

Max considered his options briefly before Lori announced that she too had an offer for him. She admired the strategy of placing Lumio in museums and independent design stores, she had visions of the next Lumio with colored lights, rather than just white light, and she wanted to help Max produce that as the next generation of Lumio products. She would supply $250,000 for 12% equity, but she would also offer Lumio a $250,000 line of credit.

Daymond wasn’t going to be left behind, Max became that rare breed of entrepreneur who had all five sharks vying for his approval as the FUBU guru added his own deal to the pile. Daymond would offer $750,000 investment in Lumio, but in exchange for 20% equity in the business. He would pursue a licencing agreement for Lumio and the deal included a $10 million line of credit.

Max was a little overwhelmed by the number of offers open to him. Kevin O’Leary helped him out a little by running through the deals on the table. Kevin also once again emphasized the low equity figure involved in his own deal, and mentioned that Max could walk out of the tank to finance again with only 4% equity surrendered.

Daymond was quick to object to Kevin’s not-so-subtle manipulation, he pointed out that Max would not need another round of fundraising with his $10 million line of credit. Daymond and Kevin battled it out briefly, with Daymond asserting that only he and Lori really knew products.

The tension settled down between the two sharks and Kevin once again ran through the offers, but this time he was interrupted by Robert, who announced he would improve his offer. He told Max once again that he shared his vision, and was prepared to offer $350,000 for the same 10% equity.

Max considered his options briefly, but with such a large number of avenues open to him, Robert’s improved offer was the one he chose. ‘Robert, you’ve got a deal’ he announced, and his new partner got up to shake on it.

Lumio Now In 2023 – The After Shark Tank Update

Like most companies that appear on Shark Tank, sales exploded after their segment aired. Within five minutes, more than 3,000 orders were placed on their website. Not only that, but Lumio has also been featured in several publications including The Wall Street Journal and GQ Magazine. It was also included in Entrepreneur magazine’s list of the ten most inventive crowd-funded companies.

Mark Cuban himself also included it in his list of “5 Must-Have Holiday Gifts”, even though he wasn’t the one who invested in the product.

Since then, the company has released several other products including the Lito mini, which is a small, compact version of the lamp and like the original, it conceals itself in the form of a hardcover book. Not only is it available in different colors, but there are several patterns to choose from as well, and depending on what you pick, the price ranges from $175 to $200. You can also personalize the item for an additional $20.

They’ve also come out with a portable speaker called the Teno, which is concealed within a small sculpture. Available in two colors- lava black and arctic white- it breaks open into two halves, which reveals a warm light and powerful speaker. To control it, all you have to do is run your fingers over the natural sand surface. If anything, it’s become just as popular as the folding lamp. Since its release, it has won two “Best of the Best” Red Dot Awards for Audio Design and Innovative Product. Currently, it retails for $325 on their website.

And for those who are wondering, the Lito Classic (the one that was featured in the show) is available as well. As of 2023, there are five “styles” to choose from- maple, walnut, orange/green, red/navy, and yellow/gray.

Aside from their website, you can also get their products at Amazon and other online retailers. That’s not all, they’re also available at various high-end retailers including Design Within Reach, Nordstrom, and the MoMa Store in New York.

Like many popular products that have been on Shark Tank, however, knockoffs are an issue. If you were to look up “Lumio” on Amazon, you’ll see that there are several “copies”, all of which look very similar to the original product—and they’re all available for a fraction of the price. As with most knockoffs, however, quality may be an issue so keep that in mind.