Mother Beverages in 2022 – After Shark Tank Update for Poppi

Allison Elsworth was not feeling well. She traveled often around the United States for the last ten years. With all its lack of sleep and road food, the travel lifestyle quickly caught up with her. She always had a bloated feeling in her stomach, and her skin was always red. She researched and discovered that apple cider vinegar was likely the cure for her health issues. Allison drank the vinegar daily, but the taste was very strong, and she needed to find a better solution. She spent days in the kitchen experimenting with different recipes in the kitchen to make the ACV more drinkable without additional sugar. She got her husband Steven involved, and the pair began selling their beverage at farmers’ markets and craft shows. 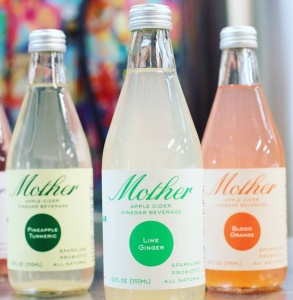 The husband and wife duo walked out onto the stage and introduced themselves to the Sharks. Allison spoke first, and she was visibly pregnant. They said they were the CO founders of Mother’s beverage, based in Dallas, Texas. The announcer previously noted that the next participant in the tank was a tasty alternative to a popular health trend.

Allison said they were in the tank seeking a $400000 exchange for 10% And equity in their company. Stephen asked the Sharks, who wanted to take a shot with him. All of the Sharks readily agreed. Allison handed out the mystery liquid to each of the judges. They all took a picture at the same time. Only afterward did the entrepreneurs reveal it was Apple cider vinegar. Rohan made a face, and Bethenny scolded the pair that they should’ve warned the Sharks ahead of time. None of them looked particularly happy with the two.

Looking a bit awkward, Allison started to say that she had tried Apple cider vinegar for 18 weeks to detox and lose weight. She claimed that she loved how it made her feel that she couldn’t stand the taste. The taste is just too strong. That was why she and Stephen ended up making Mother (Beverage). The Mother was a

Allison called in a healthy, sparkling probiotic drink that was sugar-free. She emphasized that they made it from fruits, herbs, and apple cider vinegar. She asked them if they were willing to try their improved version of apple cider vinegar. The Sharks looked a little apprehensive. Stephen mentioned that their drinks were crisp and light and only had 2 to 4 g of sugar per serving.

Allison offered the samples and said she wanted to give them the foul-tasting shots, so they had something to compare them to. The Shark still did not look happy with that surprise. Kevin tried his sample and said it doesn’t taste as crappy as the shots. Laurie was still coughing. She wasn’t over the shot of apple cider vinegar yet. She offered her leftover shot to Rohan, but he politely declined. 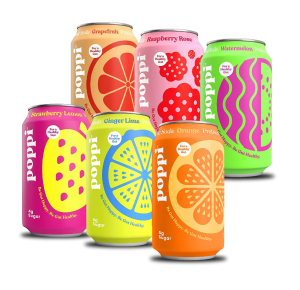 The Sharks eventually decided to try their beverage. Mark made a face as he was drinking his. Bethenny said that she liked it and that it tasted like a soda. Allison listed some of the flavors they had, including Bood Orange, Lime Ginger, and Pineapple Turmeric. Rohan asked how much apple cider vinegar was in each beverage. Stephen explained that each one contains one tablespoon of apple cider vinegar, which is about how much you would take in a shot if you were drinking it for health.

Bethenny wanted to know what one tablespoon of apple cider vinegar would do for you. Stephen stated that there were many different health benefits to drinking apple cider vinegar daily. He referred them to Allison, who had used it to detox and lose weight. Rohan interrupted, wanting to know if diluting the Apple cider vinegar would reduce its health benefits or if there would be no change. Stephen said that typically professionals recommend two tablespoons per day. She mentions that they diluted it so it wouldn’t harm your stomach. She also noted that Mother was fully unpasteurized to maintain its full benefits.

Mark interrupted them. He said he would assume that all the health claims were correct, but he wanted to hear about the business. Stephen said they had been in business for about 18 months and had made $500,000 lifetime. The Sharks requested to know their year, and Stephen said they were projected to earn about $1 million.

Bethenny wanted to know how much the bottle sold for retail. Stephen explained that they were in over 200 Albertsons grocery stores around the nation and Whole Foods in their local area of Dallas, Texas. Stephen explained that each bottle costs between $2.99 to $3.59 depending on the retailer and their margins. It cost them about $.79 to make per bottle.

Kevin said the only way he would make it out of the deal was if they got purchased by a larger beverage company. Stephen seems to agree with him. Kevin said that the predictable trajectory for them would be to be taken over by a more significant business as there is nothing proprietary about what they were doing. Kevin referenced Rohan’s experience building a beverage company and asked him to explain why the two entrepreneurs weren’t just cockroaches that were going to get crushed under the feet of Big Beverage.

Rohan said that big beverage companies were Outsourcing their innovation to the little guys, gesturing towards the entrepreneurs behind Mother. he said that very few brands were launched by big companies these days. Kevin smiled and said that Mother had a chance at survival after all.

Rohan said that people wanted to drink beverages that they felt better about. He wanted to know if Mother had a functional story. Bethenny looked on intently. Allison said that she and Stephen had worked in oil and gas before starting their business. She was dealing with many health issues and wanted to figure out a way to solve them.

She went back and forth to different doctors, experiencing sluggishness, skin problems, and bloating. Finally, she found a source online that directed her towards apple cider vinegar. She said she tried it for two weeks, and everything subsided. She had a hard time getting over the taste, which, as the Sharks experienced, was strong and unpleasant. She spent time in the kitchen experimenting with different natural flavorings and herbs to get something drinkable. 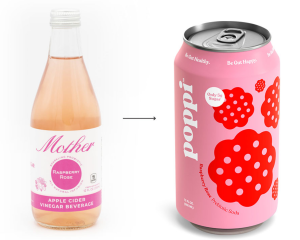 Stephen and Allison began selling their beverage at farmers’ markets. One day, they came across a Whole Foods buyer who tried their product and decided to try it out in the stores. Kevin asked if they were now full-time vinegar salesman, and Allison confirmed they were. Bethenny wanted to know how much they had invested in their business. Stephen explained that they had raised $125,000 at a $600,000 valuation. Kevin pointed out that they were now saying they had a 4 million dollar valuation. This caused an uproar among the Sharks. Stephen explained that the prior round of Investments was friends and family end pre-revenue. He said that most of that money was to start their production facility. They manufacture the products themselves. Rohan wants to know how big they could get.

Stephen said that they could produce 60,000 bottles a month. He said they had already started to finance a fully automated bottling line, increasing their production to 200,000 bottles a month. The two guest judges were confused as to why they would want to manufacture the products themselves when they could get a co-packer. Bethenny saw it as a disaster. She said that they were in the weeds. It was a concern for the other Sharks as well.

Allison was trying to explain that it kept their costs down. Stephen said they want to keep the product raw and unpasteurized, which is why they did not get a co-packer. Bethany said that the whole thing was a disaster. She said that if she hadn’t done a deal with the co-packer for her business, skinny girl, she would have folded under by now. She has been copied many times, and she knew she would need the muscle of co-packer and distributor. She explains that they needed a partner because their business was not out of Phase Zero yet.  To get to the first step, other people need to manufacture your product. Bethenny went out.

Kevin agreed that Mother (Beverage) was still in its larval stages – “not yet a cockroach,” as he put it. They had not gone through the pressures of marketing or attempting to get into retail spaces. He sounded frustrated by current and past beverage manufacturers who came into the Tank overly optimistic. Mr. Wonderful went out, stating that their valuation was insane. Mark Cuban followed soon after for similar reasons, expressing his regret at not being able to help a Dallas-based company.

Lori went next, also saying that she saw the vision for Mother (Beverage), but did not think they were close to executing it. She saw the potential, and she was willing to be a customer, not an investor. She went out. Rohan was the last Shark standing. He decided to make them an offer.

Kevin looked surprised, but Rohan continued, stating that the valuation wasn’t going to be what they wanted. He walked them through a bit of the math and then revealed his offer – $400,000 for 25%. The other Sharks urged the entrepreneurs to take the offer and run. It was a fair valuation that more closely represented what the business was capable of. There was some hesitation, but they ultimately accepted, 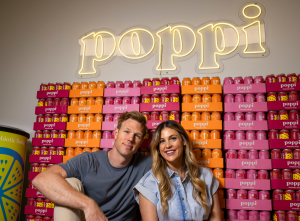 If you try and search for Mother (Beverage) now in 2022, you’ll notice that you get redirected. Of course, the company is still in business, but it went through a significant rebranding and redesign. Gone are the glass bottle and classic and functional label design. In are brightly colored aluminum cans and some new flavors such as Classic Cola. Most importantly, the name changed from Mother (Beverage) to Poppi.

Soon after the rebrand, Poppi got a slew of celebrity investors joining in on this investment round, including the Chainsmokers. Together, they raised $13,000,000, which is quite impressive. After that funding round, they built up their inventory and hired new team members. Poppi, which they are marketing as a tasty functional soda, has appeared in a bunch of new stores such as Safeway, HEB, Walmart, Publix, 7-Eleven, and Target.