Jeff Stafford and Dusty Holloway are stepping into the Shark Tank with a product that they believe will explode in the fishing market. They represent their company, the Shell Bobber, and have come to the Shark Tank in order to seek an investment of $80,000 in exchange for 20% equity in for their company, which is one of the coolest fishing accessories to ever hit the hunting and fishing market.

Jeff explains, earlier this year, him and Dusty went hunting; after firing their shotgun, the empty shotgun shell fell into the water and floated perfectly. Jeff immediately thought, “that’d be a really cool fishing bobber,” and the market potential was huge since they would be combining two multi-billion dollar industries in the form of hunting and fishing. In order to mass produce these fishing bobbers, they take a shotgun shell and deprime the explosives inside. After depriming it, they stuff the shell with a floatable material and insert a cap to make the thing look complete. After this, insert a wooden dowel with a slot for the fishing line, then slide a spring on top and they eventually had their very first shell bobbers.

In order to find out if the product would catch excitement, much like it did with Jeff and Dusty, Jeff took it upon himself to contact all the local bait-and-tackle shops with an offer for a test order. In fact, people loved the product so much that they were actually stealing it off the shelves; they tested the market, proved the concept, and have come to the Shark Tank in order to find help. Every store that sells fishing accessories will want to sell a Shell Bobber, and with the help of a Shark, they can get the Shell Bobber into each store. 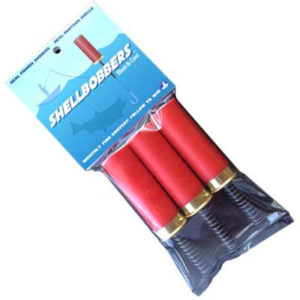 Kevin immediately asks why bother using dead shells, as if they were to use live shells, the live shells could blow the fish right out of the water and invent a new fishing technique. As Kevin mulls over the hypothetical, Dusty passes out samples, and Robert points out that they are indeed real shells. He then asks how much each shell costs to produce, which Jeff reveals comes out to well under $1 United States Dollar per 3-pack, including labor. Each pack retails for $8.99, and Mark immediately has an interested, twisted look on his face.

Daymond jumps in and says he is their go-to guy as he loves hunting and fishing, but the evaluation is so high and he begs for the two of them to have a proper evaluation and not to mess things up – he asks for sales. In their market test, Jeff explains, Shell Bobber sold 440 units for a little under $1,000 in sales. Robert jokes, he now explains why the two of them brought the shotgun as a robbery is the only way they will get an investment. Lori asks about Jeff’s pitch earlier, as he had claimed that the Shell Bobbers were flying off the shelves, but under $1,000 in sales says otherwise. Jeff claims that the process is new to them; Ace Hardware had put a sample in numerous pilot stores and had sold a bobber a day, which meant people who were coming in to buy a screwdriver or other product ended up buying a Shell Bobber as well.

Jeff continues on, as Lori and the other Sharks come to an understanding of how the low sales velocity was determined by the horrible niche placing of the product. If Jeff and his company can find a proper investment to meet a proper fulfilment order, Ace Hardware alone will place an order for close to 4,000 test stores which would come out to nearly 1.6 million bobbers in the first year of sales alone. Kevin has a devilish grin on his face. Daymond asks a barrage of questions, ranging from the method of sales to a patent or trademark on the product; Jeff explains that they have a provisional patent until one is approved, they have filed a trademark on the name “Shell Bobbers,” and they have filed trademarks on fishing ammo and a variety of other similar terms. However, Daymond asks if Jeff sees anything wrong with the valuation of the company, which was placed at around $400 million dollars. 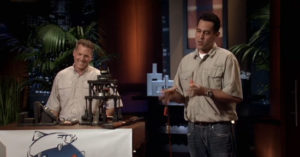 Jeff starts by saying that the evaluation of any provisional start-up company is very difficult, but what he did was decided how much money they needed to move in the proper way. The investment would cover the patent and manufacturing of the machines, legal fees, and leave enough capital to cover their operational expenses. Kevin believes that the Shell Bobbers will sell, as long as the two of them find a distributor, which will be the most challenging part. There should be a distributor, however, which will handle about 80% of the niche task of delivering tackle and bait supplies to outdoor stores – Jeff knows who this is, but he has not shown the distributor the product yet.

Jeff feels that he is a perfectionist and is not willing to take the product to a distributor until he feels as though the product is perfect, but Daymond is immediately willing to make the first offer. People would normally give someone a valuation of 3 to 5 times the amount of sales if they are lucky, but Daymond is willing to offer Jeff and Dusty 8 times their amount of sales in an investment, in exchange for 20%. This makes the (joking) offer come out to $8,000 dollars in exchange for 20%, but Kevin calls Daymond a minnow and will make the first real offer

Kevin extends an offer of $80,000 in exchange for 50%, but the first thing he must acknowledge is how he will get his return on such a risky investment. As an investor, he will reclaim $.50 on every unit purchased until he recovers his $80,000, where it then drops down to $.10 per unit. Mark calls this a “throwback” and not a bite, but Jeff admits that Mark’s offer is better than Daymond’s. Mark focuses on the business at hand and asks for the two “non-offers” to be thrown aside, and asks the two of them how they will scale their business; the challenge they have is not raising the amount of money since they have huge margins. Mark is guessing that they need a scaling strategy since they have not found a way to fulfill the distributor’s purchasing order.

Mark then gives the hypothetical of producing 10 million Shell Bobbers per year, and asks the two men how they intend to fulfill such a high production volume; Dusty feels that he can make 10 million a year, thanks to the help of reloading machines which will crimp the bullet and apply the cap at the same time. This means that the producer then just has to slide the wooden dowel in, but this means that the process is still automatic – someone still has to physically be performing the insertion. With part of the money from the investment, the two of them will move out from Dusty’s garage into a proper area where they can fund the machines and hire some people who can earn an hourly wage by overseeing production of the bobbers. 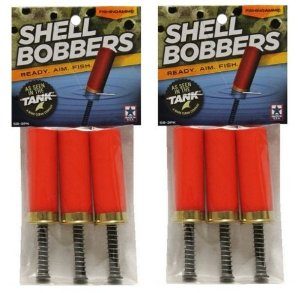 Lori asks about the progress on the provisional patent, but Jeff admits that he filed for the patent himself and has not done an extensive search under the proper filing of an attorney who specializes in law. However, there are some extensions for the Shell Bobbers that are in production which include a glow-in-the-dark variation and camouflage variations, which means that some carriers are showing interest in picking up the Shell Bobber.

All of the other Sharks have lost track of Kevin’s offer and ask for him to repeat it, which Kevin does – Jeff feels that they are not comfortable with giving up half of their company, which Mark Cuban feels is the right offer. Mark has been relatively quiet compared to the other Sharks, but he jumps up and admits that the two of them have given the right answer and thus, Mark gives an offer of $80,000 in exchange for 33% of the company based solely on the tenacity of the two pitching.

Mark demands the two give him an answer immediately, saying that an entrepreneur has to be able to make a split-second decision. In the end, Jeff and Dusty find a three-way partner with Mark Cuban, securing an $80,000 investment in exchange for 33% of their company, Shell Bobbers.

Shell Bobbers Now In 2022 – The After Shark Tank Update

The deal with Mark eventually went through. With his help, they were able to move into a larger facility to keep up with inventory demands (they received a shipment of 660,000 shell casings, which took up an entire container, shortly after the episode aired).

Just a few months after being in the tank, they received an update segment, which was included in episode 509. It was revealed that they had landed a deal with 7-11, who agreed to sell their product at 3,000 of their bait and tackle stores nationwide.

Not only that, but they also got into Cabela’s, Gander Mountain, and several other retailers. With that, their sales exploded; they went from making less than $1,000 to more than $1 million. That’s not all, they also revealed that they were in negations with Walmart.

The segment also featured their new facilities, machinery, and employees. They also stated how proud they were to make the Shell Bobber in the United States.

While they eventually got into Walmart, it didn’t last long. The business folded sometime in 2017. Not only did their website go down (they had previously mentioned that web sales were down), but their social media pages were also abandoned (they were last updated in 2017).

But for a while, the product was still available on Amazon. However, it was eventually pulled from the site sometime in 2019. Perhaps they were selling their leftover stock? It’s definitely possible seeing as how they haven’t restocked since. Most people were also happy with the product, judging from the reviews on the site. While some complained that they didn’t float well, others seemed satisfied with the bobbers. By the time they were gone from Amazon, they had a 4.5-star rating (out of 144 ratings), which is quite impressive.

What are the entrepreneurs up to now? According to LinkedIn, Jeff has been the Chief Marketing Officer at Darwin Automotive/Superior Integrated Solutions since February 2017. Prior to that, he was the Vice President of Sales & Marketing.

As for Dusty, he’s the owner of H&H Survey Consultants, a land surveyor company that serves the greater Central Florida area. In fact, it’s been around longer than Shell Bobbers; he founded it back in 2010—years before they were even in the tank with the idea.

Needless to say, they both seemed to have moved on from the project. Given that, the pair probably won’t be returning to the tank anytime soon.