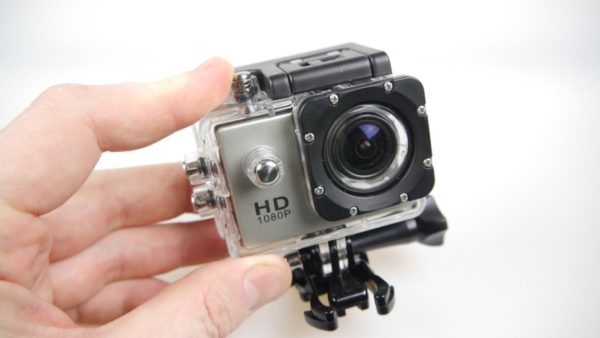 In the similar vein as the GoPro, the SJ4000 is one of the more recent offerings from Chinese company SJCAM. With many options in terms of action cams, and many, many more outright terrible products trying to ride the appeal of catching everything on camera, prospective buyers may look at the low price tag (click here to see the price with all the current discounts applied) with some suspicion. Here, we will take a look at which category the SJ4000 should be placed in.

I’ll be the first to admit, I was more than a little skeptical about the SJ4000 upon receiving the package. Being used to DSLR Cameras like the Nikon D5300 for most of my life, and having only around 2 years of experience with “action cams”, I still find myself more than suspicious holding this little guy in my hand and reading the claim of having 1920x1080p resolution.

The SJ4000 is tiny, both in terms of dimensions and weight. Easily able to fit in the palm of the hand, this camera also weighs less than a bar of soap, but seems to be sturdy enough in design to take a fall. The lens and screen both also seem constructed well enough, with enough clarity within the 1.5 inch screen to get a pretty good idea of what you’re recording or shooting. The camera also happened to come with plenty of accessories, of which the outer waterproof housing has got to be my favorite, as it is as waterproof as it claimed (tested by throwing the camera in a pot of water for 5 minutes, with no noticeable wetness trapped inside). It also added to the sturdiness, which while I would not feel safe falling onto the camera full weight, I wouldn’t worry about it dropping 10 or so feet.

Out in the Field

After examining the camera and putting it through some home testing paces, I decided it was high time to take the SJ4000 out to strut its stuff. To full test out the features and capabilities, I ran it through three tests, normal day conditions (high amount of sunlight, high heat), rain conditions (heavy rain, high humidity, high heat) and night.

For the normal day test run, I used the camera without the waterproof casing, and the results were nothing short of incredible. As mentioned before, I’m used to DSLR quality, and this camera for about 1/10th the price gave me just about the same recording quality as my Nikon from several years back. In recording video, I found the images to be crisp and life-like though I cannot verify the claim of having 60FPS, and there were some times where sudden turns or the occasional shake caused the images to distort significantly.

During the rain day test, there were a few more issues that appeared than I would like, but nothing unexpected. Glare was a major drawback, in several portions of video taking up almost half the screen in certain moments due to the waterproof case. Also, there was a case of Fish-Eye which made the images seem, while still view able and objectively still quite good, a little odd. Lastly, the camera seemed to have a bit of trouble in that during filming, colors that were too close together in spectrum would bleed together during rainstorms. To its credit however, the extreme humidity did not seem to be an issue for recording, as there was no inner lens fogging throughout the adventure.

During the night run, our friend glare came to visit yet again. While the color correction during night filming was surprising; In some cases beating my own eyes in picking up details while outdoors, the glare did occlude quite a bit (including making lit signs nearly unreadable) and ultimately was the main detractor.

The SJ4000 comes with a very wide angle capture, at around 170 degrees. This is incredible, and allows for incredible shots at nearly every distance. The footage gained from this lens does, as mentioned before, somewhat vary based on the use of the waterproof case and well as the environment. Another feature that varied, typically for the worse, was audio capture. While without the case and in a windless room, the audio can be acceptable, but a change in either renders the audio next to useless.

I would recommend anyone who wants to do commentary on their videos to buy a microphone and edit in audio, as any quips made on the trail or out in the world will come out as at most a muffled, mostly inaudible mess. That being said, at the price point the SJ4000 is offered at, you can easily afford an external microphone to nullify this complaint. One thing that blew me away in the best sort of way though, was the time lapse capability of this camera. I set the camera skyward for the most part of one day, and expecting a decent overall shot with a bit of lighting issues, instead I got something high quality, well balanced and overall a wonderful bit of film.

I will say that the SJCAM SJ4000 does leave a bit to be desired in quite a few aspects. Glare control, color saturation, and some sort of image stabilization would make this camera significantly better, as would acceptable audio. Also, despite being advertised as such, this camera is not quite 12MP. However, does this mean the SJ4000 is a scam? No, of course not. In fact, for its price it’s really good for first time buyers, or kids who want to record their BMX or other antics which may be high risk to the camera itself.

It could also make for a great dash cam with a 170 degree field of view and low price.   With SJCAM constantly upgrading the software and firmware, there is a decent chance that corrections can be made to help with some of the quality issues. Before we close off this article with a rating, a final word of warning. SJCAM products have recently been having a major issue with counterfeiters, especially with the SJ4000 model. As a result of this, you should be very cautious about where you buy this action cam, and only go through authorized and vetted dealers. Overall, I would give the SJCAM SJ4000 a 7.5/10.

To get the SJ4000 with all the current discounts applied at Amazon.com you can click here.