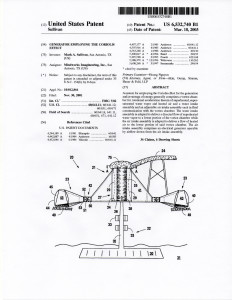 Mark Sullivan believes that he has a revolutionary idea that could quite possibly change the world. What he wants to propose to the Sharks on ABC’s Shark Tank is a generator that can capture natural energy from Earth’s rotation. Sounds kind of bogus, right? But the madness doesn’t stop there. Sullivan is a visionary man and it is his belief that the Sullivan Generator will also produce two very valuable by-products as a result of the energy it harvests. This advanced generator will be capable of making fresh drinking water out of salty ocean water in addition to collecting highly valued minerals such as manganese and gold. This all seems like a dream that’s too good to be true, but Mark has absolute faith that this product would definitely be something worth investing into.

Of course, however, it would take an incredible amount of money and a lot of business connections to set this thing into motion. Sullivan has done some great work on his own, like coming up with the concept for this generator and claiming the proper patents to protect it from being created by someone else first, but there is only so much he can do by himself. That is why he reached out to the Sharks and hoped that they would see the brilliance in this product of the future.

Mark Sullivan introduces himself to the Sharks as an inventor who already has more than 1000 inventions under his belt. He uses this as a tactic to soften the Sharks up before giving them his asking price of $1 million in exchange for a 10% stake in the Sullivan Generator. Then he jumps right in to explain that what he has is an electric generator that harvests energy from Earth’s natural rotation. What it does is, it takes in salt water from the ocean and after processing it, it leaves behind all the minerals that have been filtered from it. The water vapor that is then produced travels up the generator and is captured inside a vortex chamber. What happens next is the Coriolis Effect. By spinning the water around rapidly, it creates a hurricane inside the vortex chamber. The force from this causes the turbines to spin and that is where the electricity is harnessed.

After he has explained the complicated process that allows the generator to work, Sullivan reveals to the Sharks that the mineral by-products left behind in the generator are manganese and gold. This effectively captures their attention, because naturally the Sharks would be interested in hearing more about a product that involves gold. And, according to Sullivan, they could make an anticipated $97 billion in the collection of gold. This seems to greatly please the Sharks.

Now, what Mark wants to do is to set up at least 200 of these generators, all of which would be controlled over the internet. All he needs now is their help to develop the technology that very would could change the world as we know it. However, before he can say anymore, Kevin O’Leary is first to chime in, asking Mark “how long are you visiting Earth?”. This gets a chuckle from everyone else in the room, but Mark Cuban wastes no time with getting down to the more serious questions. Like any other reasonable investor , he asks to know what Sullivan’s background looks like. He has degrees in both biochemical engineering and physics. It has been several years since he started developing the Sullivan Generator as well, so he’s had plenty of time to check and recheck all of the math and science behind it.

Sullivan has with him a model of what the vortex chamber inside the generator would look like, just so the 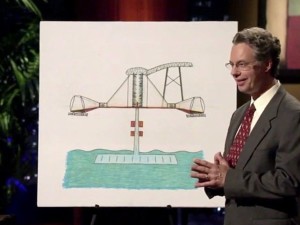 Sharks can get an idea of what’s going on behind the scenes. However, he puts it in highly technical terms that discourages Daymond John. John confesses to not having a single clue as to what Sullivan said, and as a result of his ignorance towards highly scientific matters, he decides not to invest.

Robert Herjavec decides to ask a few more questions to make sure he properly understands what’s going on. In theory, if his generator does leave behind gold and manganese as by-products, it would then be true that these same minerals were left behind after naturally occurring hurricanes. Sullivan confirms this idea and states that per every 1 cubic mile of salt water, you could harvest 1,500 tons of gold. But if you were given time to think about it, 1 cubic mile of salt water is an incredible amount of water to sift through. However, Sullivan plans to remedy this by making his generator 100 feet tall.

The Sharks want to know how long it would take for him to build this generator should he be given the funds necessary to do so. He states that they should be operational within 9 months. Mark Cuban doesn’t believe this time estimate at all. Something about the whole project just feels off to him and he decides that it’s too risky for him to invest into.

That leaves 3 Sharks still in and they all seem to want to know more about the other inventions that Sullivan has under his belt. He reveals to them that he collects a royalty on artificial hearts because he invented those, but he also dabbles in music and fashion design. This gets a laugh out of everybody because they all seem to think that Sullivan is a bit of an odd character.

Herjavec decides to ask what kind of money they could make in gold if he were to give him a $50k investment instead of $1 million. He only has a few moments to answer before Barbara Corcoran interrupts to say that she will not be investing at all. This takes him by surprise, but what’s even more shocking is that O’Leary decides to follow suit. He believes that the technology here is very interesting, but not worth the risk. And, as a result of O’Leary’s decision, Herjavec also decides not to hand over any money because all of this seems to be a little too far fetched.

Despite having to walk away from the Shark Tank empty-handed, Sullivan assures them that this won’t be the end of his journey. With a little more time and maybe more convincing, he hopes to get the Sullivan Generator out there so that it can start changing the world.

The Sullivan Generator Now In 2023 – After Shark Tank Updates

Unfortunately, nothing ever came out of the Sullivan Generator. If anything, many people were skeptical (and rightfully so) about the scientist’s claims. One person even asked Reddit what they thought about the generator and the general consensus was that it was a nutty idea—that there’s no way to extract gold from the water. This makes sense when you think about it because if it was possible, people would have been doing it long ago.

Another thing that makes you question the entire situation, is the fact that he claimed to have made over a billion dollars with his patents. If he did indeed make that amount, surely he wouldn’t be pitching his product to the sharks for a $1 million investment? Also, he had said that he completed post-graduate studies in physiology and bio-engineering but as far as we can tell, he doesn’t have any advanced degrees. Seems like there are some holes in his story.

Given all that, it’s really not that surprising that none of the sharks chose to invest in the product. It’s hard to invest in something that you don’t believe in, after all.

The whole situation doesn’t seem to have deterred Mark (the scientist, not the shark) from working on other inventions, however. In fact, it looks like he has worked on various other projects in the past, according to his website, which you can check out here.

What else has the self-proclaimed scientist been up to? It’s hard to say as there’s virtually no information about him on the internet. Even on LinkedIn, his profile only says that he’s a business owner at self-employed. Is he referring to Mark Sullivan Research? Who knows. One thing’s for sure, he will forever be remembered as “the wacky scientist on Shark Tank.”