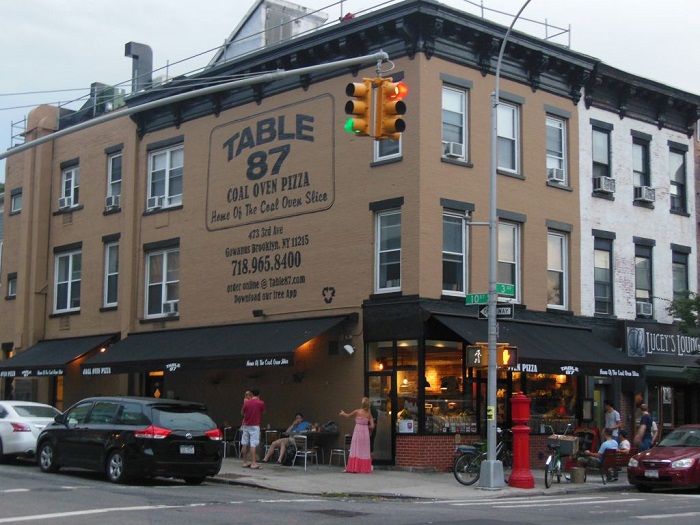 A classic Brooklyn pizzeria may not be the most common workplace of a Shark Tank entrepreneur, but it’s what Thomas Cucco calls home. Cucco opened the first Table 87 Pizza in 2012, and since then, he’s had enough success to open a second store. With rave reviews for his authentic coal oven style, Cucco wanted to get his pizzas into every home in America. His plans to expand into the frozen pizza business were ambitious, but they would take cash. Prior to his Shark Tank appearance, production took place in his brick and mortar stores, so any investment would go towards an independent kitchen for the frozen line. This guy looked like the real deal, but let’s see what the sharks think.

Cucco entered the shark tank and got right down to brass tacks. For two hundred thousand dollars, he was offering ten percent equity in Table 87 Frozen, a two million dollar valuation. Cucco’s assistant performed some pizza dough acrobatics to lend the presentation a little flair, while Cucco explained his pizzas’ fresh and authentic ingredients. Table 87 Frozen was the only coal oven player in the frozen game, so Cucco expected his individual slices and whole pies to fly off the shelves. He couldn’t seem to get enough of his own product and finished things off with an Italian finger kiss. Bellissimo! He enticed the sharks with some samples, individual slices from Table 87’s twenty-inch pie.

They all agreed that the taste was excellent, but Kevin had some concerns. He saw cooking and flash-freezing pizza, then selling it in the frozen food section as a tough sell. There are hundreds of players in the frozen pizza business, so Cucco would have to differentiate Table 87 Frozen enough to compete against the DiGiornos and the Red Barons out there. He answered that his superior quality would do the legwork. Kevin wanted to get down to numbers. Each individual slice sold for five dollars, of which Cucco saw three. Each pie sold for ten dollars, of which Cucco saw six-fifty. Margins tend to be lower in the food business, so they would need to be covered by volume. When distribution came up, Cucco answered that Table 87 Frozen was in about two hundred fifty stores, including Whole Foods and Fairway Market. Over the frozen line’s first nine months, it had two hundred sixty thousand dollars in sales.

The sharks learned that, like many fledgling businesses, Table 87 Frozen was still a home operation. Cucco was making the market-destined pies in his restaurant locations. This limited production and hurt the potential of his brick and mortar locations. They all agreed that an investment would have to go toward a factory kitchen. However, upon learning that only the frozen side of Table 87’s business was on the bargaining table, they all got a little squeamish. Cucco replied that Table 87 Frozen would need to be a completely independent business in all but name. With separate kitchens, distribution, prices, and employees, Table 87 pizzerias and Table 87 Frozen would simply coexist for brand recognition.

Kevin had dealt with fierce competition from his experience with Softkey, The Learning Company, and related education and software businesses in the late 1990s. Applying this knowledge to the retail food business, Kevin tried to make Cucco see the light. According to him, growth would bring slotting fees that Table 87 Frozen hadn’t encountered as a small business. Outside of anecdotal experience, Cucco didn’t have an answer for Kevin, so Mark took things in a different direction. To him, the heat and serve, on-demand potential of Table 87 Frozen was high. He explored online delivery options with Cucco, praising interest from Amazon Fresh, Good Eggs, and Fresh Direct. According to Mark, the modern consumer is looking for immediate satisfaction. On the other hand, he was no fan of Cucco’s restaurants, which could compete for attention. He also agreed with Kevin on the difficulty of penetrating the frozen food section in physical stores.

Robert jumped in and also expressed his concerns about the competitive frozen pizza market. To him, Table 87 Frozen wasn’t worth the risk, even with the possibility of distribution in bars and stadiums. He left the negotiations in his usual concise style. Kevin jumped back in, offering cautious support but claiming the valuation was too high, especially when considering only Table 87 Frozen. After all, with considerable personal investment in packaging, research, and supplies, Table 87 Frozen only had a quarter million in revenue. The success of the restaurants meant very little here. Taking a line from Mark Cuban, he delayed his decision, wanting to see how things would go.

Emerging from total silence, Barbara spoke up. She praised the quality of the pizza and Cucco himself, calling him authentic and relatable. However, she had some qualms with his business model. To her, splitting the business between restaurants, online delivery, retail distribution, and alternate distribution would spread Table 87 Frozen too thin. She also was concerned with his product diversity and felt like he should focus on the individual slices instead of whole pies. Here, we have an example of a product that has enough potential to weather some confusion. Each shark (and Cucco himself) wanted to take Table 87 Frozen in a different direction. However, their willingness to work with him instead of casting him aside for lack of focus means they believed in the company.

In fact, Barbara did give Cucco his first offer but for much higher equity than he asked. She offered to invest the two hundred thousand dollars for thirty percent of the company. She also asked him to commit to single slices, which she saw as his niche. It’s clear that she saw Cucco as capable but overly ambitious and wanted some more stability from Table 87 Frozen. Looking to muddy the waters, Kevin offered Cucco a loan deal: two hundred thousand dollars in exchange for a twenty-five cent royalty per frozen slice. He would accrue these royalties until he earned six hundred thousand dollars. It was a steep offer, with the benefit of Cucco losing no actual equity in the business. Still, in the food business, even twenty-five cents per unit is a big hit. Barbara called Kevin a loan shark, and Cucco agreed but said he would think about his offer.

Following Kevin’s lackluster proposal, Lori decided to make an ambitious offer – and undercut Barbara. For twenty percent of the company, she would invest two hundred fifty thousand dollars, a larger investment for lower equity. She reasoned that the extra fifty thousand would help him jump-start mass production. In addition, she was willing to give Cucco a greater say in his business. She supported Table 87 Frozen online, in bars, and in stadiums, all of the avenues that Barbara thought would be unsuccessful or distracting. She even offered her strategic connections with natural food companies. Robert wanted to see where the other sharks stood and checked with Mark. Although Mark liked the on-demand functions of the frozen business, he still cautioned against traditional retail. For this reason, he bowed out.

Ignoring Kevin’s loan deal, Cucco now had two more on the table, but Barbara was willing to sweeten her offer to stay competitive. Lori kept Cucco’s attention and negotiated with him on the equity, despite Barbara’s protests. As Barbara repeated “No!” and claimed she had a better deal waiting, Lori accepted eighteen-and-a-half percent equity, down from twenty. For only a slightly higher stake than he originally offered, Cucco walked out of the tank with a larger investment than he expected, a fair deal. In his words, he was “Nervous walking in and then joyful walking out. Incredible!” In minutes, he had taken his family-owned pizzeria nationwide.

Unfortunately, the deal with Lori fell through. Despite that, Cucco was able to grow his pizza company. For one thing, they were able to launch their online store within a few weeks of the episode airing. They even offered a “Shark Tank Special”, which included enough pizzas to feed eight to ten people for twenty dollars. Shipping was a little tricky as the pizzas had to be packed with dry ice and hand-delivered, but they were able to do it.

Since then, they’ve also opened a third brick-and-mortar location in Brooklyn, New York, which has proved to be another success.

As of 2023, Table 87 is still up and running. In fact, they’ve gotten into several grocery stores including Whole Foods, Walmart, The Fresh Market, Thrive Market, Union, Market, Wegman’s, Stop & Shop, and more. Not only that but they’ve also stated that they plan on expanding nationwide.

Their restaurants are also thriving. For starters, all three locations have more than four stars on Google, with many praising them for their service and food (the fact that it’s made from fresh ingredients). That’s not all, many have also written that the restaurants have a great atmosphere. Like most restaurants, however, there are some negative reviews. For example, one user wrote that they had messed up their order. Others aren’t very enthusiastic about the prices.

Keep in mind, however, that their pizzas aren’t cheap. If anything, they’ve gone up significantly since their Shark Tank days. Take their Margherita pizza, for example, 8 slices will run you $99 (not including shipping). The same goes for their pizza pies; six will cost you $109. For those who want to save some money, you can subscribe to automate shipments, which will save you 10% of each order.

In any case, Table 87 is another Shark Tank success story. They might not have gotten an investment in the end but things have worked out and they’re now a thriving business.