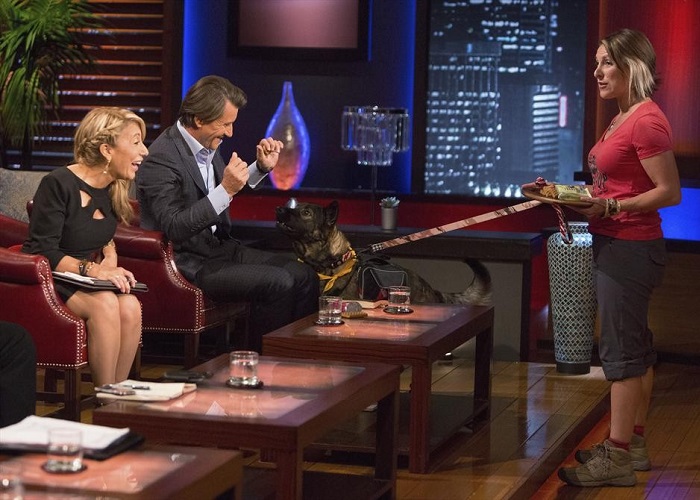 TurboPup founder Kristina Guerrero, from La Pine, Oregon, had a distinguished career in the United States Air Force that culminated in her achieving the rank of Lieutenant, after flying C130 Hercules on active combat missions. After the Air Force Kristina returned to school and became a qualified occupational therapist. She settled into her new career well, but the keen hiker and animal-lover soon found her mind wandering in an entrepreneurial direction.

It was during a long back-country hiking trip that Kristina had her flash of inspiration, she stopped to eat but realized that she had failed to bring any food for her dog, Dunkan. She shared her own food with the dog, even though she hated giving him food that was lacking in vital canine nutrients, and on the way back home she resolved to find a suitable travel food for Dunkan before she embarked on her next big hike.

After searching in pet stores, and online, for such a product, Kristina discovered that there were no compact foods created especially for dogs so she resolved to develop her own. She enlisted the help of her husband, a food-scientist, and between them they developed TurboPup. Their new formula was a complete meal replacement solution, full of essential vitamins and nutrients, and designed to be suitable for dogs of all ages.

Kristina launched the TurboPup business using her own savings, and she had a modest amount of success with small independent retailers, but she needed someone more experienced in business to help her avoid the problems that frequently occurred.

After receiving five emails on the same day from friends, telling her that Shark Tank was looking for entrepreneurs who also happened to be veterans, she sent off a E-mail, not really expecting to get a place on the show. A few weeks later Kristina received the news that she had been selected as a Shark Tank applicant, and she got the opportunity to pitch TurboPup to the Sharks in early 2015.

Kristina entered the Tank alongside one of her Furry Sidekicks, Odin, and revealed that she was looking for a $100,000 investment in exchange for 10% of the TurboPup business.

She launched straight into an enthusiastically delivered pitch that told the story of that long-ago hiking trip, sharing her food with her hungry dog, and finally having her eureka moment.

Kristina detailed the development process, all performed in her own kitchen, until she came up with her completed product, TurboPup, a healthy and nutritious compact food for dogs.

The pitch was going well, but nothing sold TurboPup as much as Odin, who began to get quite excited as soon as Kristina ripped open a packet of TurboPup. He jumped up to grab a piece of a TurboPup bar as soon as it was offered and his enthusiasm left the sharks in no doubt that TurboPup was going to be popular, with its intended users at least.

Kristina handed out a few samples of TurboPup to the sharks and told them to go ahead and offer Odin a piece if they wished to, although not too much, as each bar contained 250 calories. Robert Herjavec, a great fan of animals whenever they enter the tank, quickly formed a deep and long-lasting friendship with Odin, helped along by the odd chunk of TurboPup, and both of them seemed to have enjoyed the experience.

Kristina asked Kevin O’Leary if he would like to treat Odin, but Kevin, who doesn’t share Robert’s enthusiasm for our furry friends, was quick to decline, asserting that he had seen real Hyenas in Ethiopia, and Odin was a Hyena as far as he was concerned.

Keen to move on from the Odin-Herjavec love-fest taking place in the seat next to him, Kevin asked Kristina what made TurboPup so different from the other 5,000 dog treats on the market. The entrepreneur was quick to point out that TurboPup wasn’t a treat, or a snack, it was a healthy and nutritional meal, fit for dogs of any age, and it was fully interchangeable with regular dog food. That factor alone made it unique in the dog products market. Robert Herjavec got the concept immediately, ‘So it’s an energy bar for dogs?’ he asked. Kristina agreed it was, although it was also perfectly acceptable as a normal meal for dogs.

Trying a get a greater feel for the woman behind the business, Lori Greiner asked Kristina what her background was. Kristina told the sharks about her former Air Force career, her time in Pilot school, and that she had seen active service in Iraq, flying Hercules C130’s over hostile territory.

The sharks were impressed with Kristina’s military background, and although she appeared just like a typical suburban housewife, the sharks began to realize that Kristina Guerrero was a lot tougher than she had first appeared. She impressed them even more when she went on to tell the sharks that in order to avoid competing in the over-saturated pet-foods market, she had approached outdoor stores with her product first.

Outdoor stores not only had no other competing products for TurboPup, but they had a great deal of interest in the product, as so many hikers, climbers and skiers took dogs with them on their treks. Some independent stores had begun to stock TurboPup, and that association eventually led to TurboPup being named the official dog-food for the National Association of Search and Rescue.

Mark Cuban thought that the strategy had been ‘Brilliant’, as did the other sharks. The Texan Shark was full of praise for Kristina herself, but he admitted that he had no knowledge of the pet-foods market, and he didn’t have the time to learn all the things a potential partner for TurboPup would need to know, and due to that, he was out.

Robert Herjavec told Kristina that not every business that came into the Shark Tank was destined to be a big business, at least not at this stage of its development. He gently suggested that Kristina needed to grow the business more before she could reasonably expect to attract the big investor she was looking for. He loved her, and he really loved Odin, but he wasn’t going to partner with TurboPup.

Lori Greiner looked unsettled, something about either TurboPup or Kristina had concerned her, but in a diplomatic fashion, common to the Queen of QVC, she rejected TurboPup too. She told the entrepreneur that she wasn’t sure about the market, and after professing her respect for Kristine, her impressive service record, and her fantastic enthusiasm, she dropped out too.

Kevin O’Leary was kind to Kristina as he rejected TurboPup. Mr Wonderful was cynical, and made the odd disparaging comment about animals, but his heart didn’t really seem in it compared to his usual level of aggression. I suspect there was a grudging respect for Kristina’s character in Kevin’s heart at that moment, but he does have a nasty shark image to live up to. However he actually felt, he let the TurboPup pioneer down gently, compared to the tongue-lashing he often dishes-out.

Daymond John was on the fence, he was unsure about the deal that Kristina was offering, yet he saw a boundless energy and a driving spirit in her. Eventually he decided he had an offer to make. He suggested a deal of $100,000 in exchange for 40% of TurboPup, Kevin told him the company wasn’t worth it, but Daymond stuck up for Kristina herself, asserting that the young entrepreneur was worth it.

Kristina showed some of that spirit as she attempted to barter Daymond down to 30% equity, the wise old shark wasn’t going to fold so easily and gave her a flat no. Kristina offered 35% equity instead, and after a few moments consideration, Daymond agreed with a wry smile.

As the new partners hugged, with Odin literally jumping for joy, Kevin O’Leary sounded almost bitter as he told Daymond it was a mercy deal. Looking triumphant, Daymond looked like a winner.

TurboPup Now In 2022– The After Shark Tank Update

The deal with Daymond was finalized shortly after the segment aired. The Shark Tank effect also caused their sales to explode. Within 24 hours of the show airing, they had received more than $30,000 worth of orders.

By the end of 2015, they were making nearly $1 million, which is a significant jump from the $11,000 they had made the previous two years.

Fast forward to February 2016 and they were featured in an update segment in the 19th episode of the seventh season. In it, they revealed that they would be partnering up with Fetch, one of the major distributors in the pet market. More specifically, they would be helping them with marketing, production, and product development. In fact, Daymond had met Kristina at the Petsmart Headquarters in Phoenix.

With Fetch’s help, they were eventually able to get Turbopup into Petsmart. Within a couple of months, the product was available in 700 locations across the United States and Canada. Daymond also took the opportunity to praise Kristina for her commitment and endless energy to growing the business.

A few months later, the company was featured in episode 104 of Beyond the Tank. In it, the Fetch executives suggested that they participate in the Global Pet Expo as it would allow them to launch the product into an international market. Kristina agreed and understood that it would require a lot of work—that she would need to take care of the sales, formula, price point, and artwork.

The day of the Expo comes and the Fetch executives are impressed with her presentation and preparations. Kristina also meets a Petco executive at the event, who offers them a licensing deal.

As of 2022, however, Turbopup no longer seems to be available. Not only is their website down (their domain is no longer connected to their Shopify account), but their social media pages haven’t been updated either. Take their Facebook page, for example, it hasn’t been updated since May 2021. The same goes for their Twitter; it hasn’t been active since 2018. It’s worth mentioning, however, that there has not been an official announcement from the company.

Their products have also been pulled from Amazon. As far as we can tell, they’ve been unavailable since 2019 so they’ve been off the market for a while. Reviews for the product were also mediocre. For example, their peanut butter bars had a 3.5-star rating on Amazon. While some customers praised the product for its convenience (great for hiking, camping, etc), others ran into issues where the bars were full of mold. Some of the packages were also full of holes, meaning that mice had probably gotten to them.