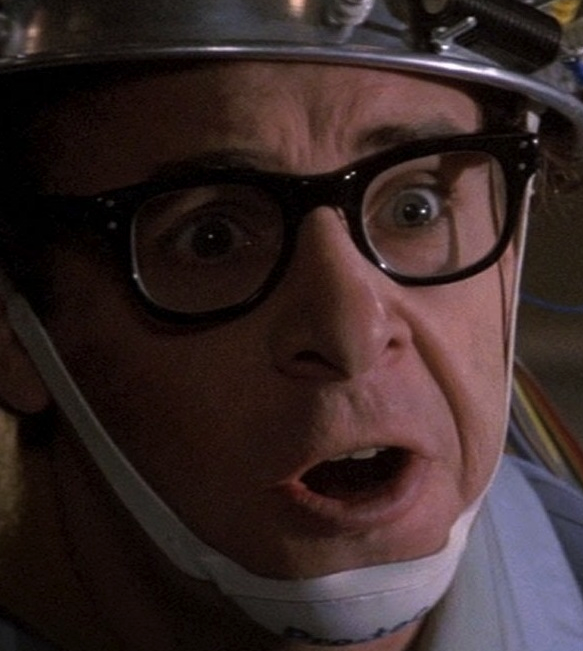 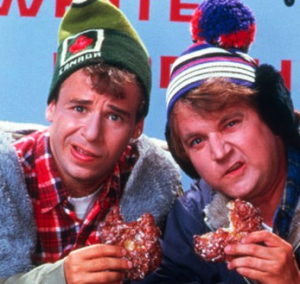 When you hear the word “nerd” do images of Rick Moranis go running through your head? The bespectacled supporting actor from the Ghostbusters films, Spaceballs, and perhaps most famously, the Honey, I Shrunk the Kids series defined adult dweebs for a whole generation in the 80’s and 90’s with his slew of whacky inventors, out-there weirdos, and put-upon dads. Then one day character actor Moranis disappeared from the spotlight completely. What happened to that king of the nerds?

A Canadian citizen by birth and at heart, Rick Moranis made the jump to the screen in 1980 with the popular Canadian sketch comedy show SCTV (Second City Television). Working with Canadian comedy legend Dave Thomas, Moranis was half of the most popular recurring sketch on the show, Bob & Doug McKenzie, about two idiotic, drunken Canadian “hosers,” who said “eh” every few words. The sketch came to define the stereotypical Canadian for American audiences for many years and lead to the acting and writing duo collaborating on a number of comedy albums, commercials, and the classic comedy movie, Strange Brew. The movie and comedy albums were huge hits in Canada, America, and abroad, and for a little while, both actors had their hands full with Hollywood offers. 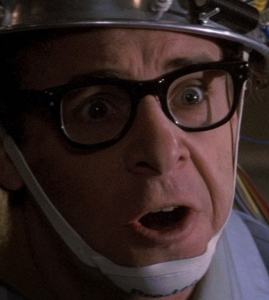 Moranis went on to portray Louis Tully in Dan Akroyd’s supernatural comedy blockbuster, Ghostbusters, in 1984. Louis Tully was a slightly creepy, slightly slow doofus with a heart of gold who ends up possessed by an ancient demon, the “Keymaster.” When the Keymaster finds Sigourney Weaver’s character possessed by the “Gatekeeper,” the two unite to bring forth “Gozer the Destroyer,” whom the Ghostbusters must defeat in the film’s final act. The role allowed Moranis to both to reach a wider audience and show off his physical comedy chops as the Igor-like Keymaster. In the 1989 sequel, Ghostbusters II, Moranis was able to get in on the action by donning the Ghostbusters garb, getting the girl, and busting some evil slime with his very own “proton pack” gun.

His role in the Ghostbusters films caught the attention of big name Hollywood movers and shakers like muppet-master Frank Oz, slapstick genius Mel Brooks, and Walt Disney pictures itself. Rick Moranis got his first blockbuster starring role as a geeky florist in the comedy horror classic adapted from Broadway, The Little Shop of Horrors. In this flick, Moranis starred alongside a villainous Steve Martin and a talking alien plant with a taste for human flesh. In Spaceballs, Mel Brooks’ Star Wars spoof, Moranis got to play the bumbling bad guy, Dark Helmet, a parody of Darth Vader. Moranis had top billing along with Mel Brooks and John Candy. Finally, in three “Honey, I Shrunk” films Moranis played an absent-minded inventor Wayne Szalinski who stumbles onto a shrinking (and later enlarging) machine that wreaks havoc on his family. The first Honey, I Shrunk the Kids film, released in 1989, became the highest-grossing live-action Disney film ever and held that title for nearly a decade. It was also a critical success, with the story and special effects being highly acclaimed across the board. The sequels were not as well received, but Moranis’ unique take on the nerdy dad inspired many similar films. 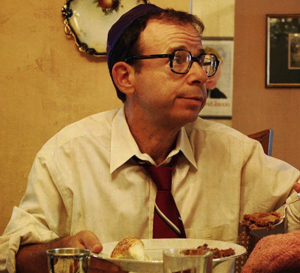 Moranis retired from acting by his own choice shortly after the third Honey, I Shrunk film. His wife had recently succumbed to breast cancer and Moranis decided to take over the duties of raising his own children. Since then, he has taken an occasional voice acting role in films like Brother Bear and Brother Bear 2, and he released a new comedy album in 2005. Moranis rarely agrees to interviews, but in the few that exist, he has spoken negatively about his experience in starring roles, preferring the freedom that came with his early sketch comedy career. He has also suggested that his success led to friction with many of his former costars and that he was disappointed with many of his final films, including Ghostbusters 2. So it appears that the passing of his wife only accelerated an exit from Hollywood that Moranis had already begun considering for his own reasons.

Moranis has withdrawn from the public eye almost completely, but continues to participate in his first love of comedic writing, on occasion. Most recently, Moranis has released a comedy album in 2013 entitled My Mother’s Brisket & Other Love Songs, an eclectic mixture of tunes drawing from the Moranis family’s Jewish heritage and traditions.

In a 2015 interview, Mel Brooks revealed that he has been trying to cobble together a Spaceballs sequel, teasing the title Spaceballs 2: The Search for More Money, admitting that he would only greenlight the film if he could get Moranis out of retirement to reprise his Dark Helmet role. Moranis has adamantly and repeatedly refused to participate in the sequel, however. This is possibly because, with an estimated net worth of $10 million, the aging actor has no vested interest a search for more money.