Christina Applegate has been on TV seemingly forever. She made her debut when she was just three months old, on Days of Our Lives. When she was 15, in 1987, she was cast as Kelly Bundy on Married… With Children, by far her most famous role. In 2008, Applegate was diagnosed with breast cancer, and received a double mastectomy. Since then, she has worked to raise awareness of the benefits of early diagnosis. What else has the former child star been doing?

Christina Applegate before the Bundys

Christina Applegate was born on November 25, 1971, in Hollywood, California. Her father was a music producer and record executive, but she was raised by her mother, Nancy Lee Priddy, a singer and actress, who left her father shortly after Christina’s birth. Priddy had a recurring but uncredited role on NBC’s Days of Our Lives, leading to Christina Applegate’s first role on television being when she was only three months old.

Applegate appeared on her own in a few commercials as an infant, for Playtex and Kmart. Her film debut was in 1981, when she was only nine years old. Jaws of Satan, also released as King Cobra, told the fascinating story of a preacher, cursed by druids, who must battle Satan, who has come to earth as a giant snake. The film, where Applegate performed as her mother’s daughter, was notable for being Applegate’s film debut, as well as having extraordinarily low production value.

Her next film, Beatlemania, was hardly a film at all. Beatlemania was not about the introduction of the Beatles to America, like the title might suggest, but was just four guys who looked sort of like the Beatles, playing Beatles songs. Somehow, the film was even more poorly produced than Jaws of Satan. Songs were performed out of chronological order, in the wrong costume for their era.

After those two films in 1981, the young Christina Applegate transitioned to TV, where production value was less of an issue than movies. In 1983, Applegate starred in a TV biopic about Grace Kelly, an American actress during the 50s who married into becoming the Princess of Monaco. Two years later, Applegate appeared in a couple episodes of Charles In Charge, and in 1986, she appeared in minor roles across multiple shows.

Focused on the antics of family-man Al Bundy (played by Ed O’Neill), the show cast Applegate as his daughter, Kelly Bundy. The oldest daughter, Kelly was the stereotypical vapid teen girl, stealing money from her dad’s wallet and sneaking out to meet boys. In fact, when Married… With Children was originally airing, the show was criticized for its reliance on lewd humor, and during Season 3, there was even a brief advertiser boycott.

Ratings for the show were never great, mostly because Fox was such a new station, and lots of Americans didn’t even receive it. But there was enough viewership for Christina Applegate to find roles on other networks. In 1988, she was in NBC’s Dance ’til Dawn, and in 1990 starred in Streets, a straight-to-VHS film where she played a much darker character than Married‘s Kelly Bundy.

Her first theatrical breakout was in Don’t Tell Mom the Babysitter’s Dead, released in 1991. From 1995 until the end of Married… With Children in 1997, she went on to perform in six films, including Wild Bill and Mars Attacks! Christina Applegate was also a founding member of The Pussycat Dolls, who debuted at the Viper Room (owned by Johnny Depp) in 1995. Applegate had talked with choreographer Robin Antin about the possibility of doing a modern burlesque troupe with Carla Kama as early as 1990, and ended up working with the project until 2003, when they restructured as a pop music group.

By the time Married… With Children ended in 1997, Christina Applegate had transitioned from child star to capable actress, and almost immediately secured the titular role in NBC’s Jesse, which premiered in 1998. Jesse cast Applegate as a single mother raising a nine-year-old boy. The show well highly rated, and received critical praise, earning Applegate a People’s Choice Award for the first season. Unfortunately, high ratings weren’t high enough to justify its timeslot, and without a place to go, the show died after its second season.

The 2000s: Anchorman and Broadway

After the end of Jesse, Christina Applegate was absent from television for quite a while. She played two roles for the time-traveling comedy Just Visiting, in 2001, and in 2002 appeared alongside Cameron Diaz in The Sweetest Thing. Also in 2001, she married Johnathon Schaech, an actor and writer.

Over the next few years, Applegate cross genres, from the rom-com View from the Top in 2003 to the true crime noir Wonderland and the Gram Parsons biopic Grand Theft Parsons. She also began working as a spokesperson for National Denim Day, which raises money for breast cancer awareness and research.

In 2004, Christina Applegate was cast as Veronica Corningstone in Anchorman: The Legend of Ron Burgundy. The film wasn’t nominated for any awards, but was a box office success and is given its due by critics, who praise Anchorman‘s use of infantile humor. After Anchorman, Applegate appeared in a number of stage performances, most notably Sweet Charity, which earned her Tony nomination.

Unfortunately, Christina Applegate broke her foot during the play’s previews. She convinced producers to run the show anyway, but her injuries left her unable to continue in theater after Sweet Charity‘s run ended at the end of 2005. Later that year, her husband filed for divorce, which was finalized in 2007. Also in 2007, she returned to network television for ABC’s comedy Samantha Who?

Samantha Who? Had a timeslot that put it against Heroes, Rules of Engagement, and The Game, which makes it even more remarkable that the show not only was picked up for a full season, but was able to secure multiple nominations. Applegate herself was nominated for an Emmy, a Golden Globe, a Prism, a Screen Actors Guild, a Teen Choice Award, and she won a People’s Choice Award. 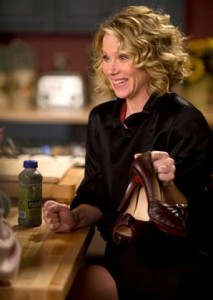 The show’s timeslot changed for the second season, and without Dancing with the Stars leading into it, viewership was considerably lower, leading to a relatively abrupt cancellation. Applegate led a campaign to renew the show, but no network was interested in pursuing a continuance. After the end of Samantha Who?, Applegate made a transition into voice acting, first with Cats & Dogs 2, and then in the new Alvin and the Chipmunks films, The Squeakquel, Chipwrecked, and Road Chip.

In 2008, Christina Applegate was diagnosed with an early stage of breast cancer. Her mother’s history as a breast cancer survivor motivated Applegate to receive frequent testing, which led to the cancer being caught early. Despite cancer only being found in one breast, Applegate opted to have a double mastectomy, to reduce her chances of the cancer returning.

After her diagnosis, Christina Applegate hosted Stand Up to Cancer, a one-hour comedy special broadcast on three major stations (CBS, NBC, and ABC,) to raise awareness and funds for breast cancer. She also announced her plans to resume working with Lee National Denim Day, with whom she’d worked five years earlier.

In 2009, she began a romance with Martyn LeNoble, a musician. They became engaged in 2010, and Applegate gave birth to a daughter in 2011. After Sadie Grace was born, Applegate returned to television, to star alongside Will Arnett in Up All Night. The show, based loosely on the creator’s experience working as a producer on Saturday Night Live after giving birth to her child, was highly anticipated by TV critics.

The show did well for its first season, but was restructured before the second season, and Applegate’s character was given much more freedom. Then, halfway through the second season, the show was put on hiatus to be restructured again. All of this was unusual for a show that was given so much support from the network, but perhaps that’s what led to the multiple format changes. After the hiatus, the show’s creator and Applegate both left the show, and Will Arnett migrated to CBS’s The Millers. After rumors of come-backs and cancellation, Up All Night was finally cancelled on May 9, 2013.

In 2015, Applegate starred opposite Ed Helms in the most recent installment of National Lampoon’s Vacation. The film, a continuation of the series from the late 70s, was a box office success, grossing nearly twice its cost. However, critics were quick to slam the film, saying it was reliant on the nostalgia of the first films without providing any of the same humor.

What is Christina Applegate Doing Now in 2018?

Christina Applegate’s career, while not exceptionally prolific, has seen her cast across a wide variety of genres and media, eventually settling into traditional comedic roles. We’ll see this reinforced later this year, with a new film previously titled Bad Moms. (The new title is still unknown.) A female-driven comedy set to release on August 19, 2016, Bad Moms cast Mila Kunis, Kristen Bell, and Jada Pinkett Smith alongside Applegate. All three are mothers in real life, which has led to an unusual amount of critical anticipation.

The film has been pushed around different production houses, passing between Apatow Productions, Paramount, and finally, STX Entertainment. Bad Moms was filmed from January 11 until March 1, and with principal photography wrapped, critics are looking forward to seeing Applegate leading an ensemble cast, as well as curious about who will be cast as the lead’s foil.

Outside of her professional life, Applegate recently made headlines for renovating her LA home, which was damaged by flooding last year.