As the improvement and heavy interest on the video game market increases, our society is becoming further engaged in video gaming and video game streaming. Essentially spawning the need for major streaming sites like Twitch our devout focus on the improvement and development of video games have offered endless possibilities from virtual reality gaming to the creation of a whole new sport archetype. Thus creating the exciting and ever entertaining world of eSports.

As technology improves in our 21st century lifestyle, we as a society are no longer bound by the physical necessity needed for sports such as soccer, basketball, and football. Granted these newly found eSports do not participate in an electronic form of the aforementioned traditional sports, eSports continues to show its prominence as more and more people flock to the phenomenon that is the eSports world. With tens of thousands of people flocking to Twitch to watch as eSport teams battle it out in their favorite gaming titles from Dota 2 to League of Legends. In addition to the continuous support of the viewers that watch these eSports, there has recently been a documentary film titled All Work All Play that goes into the creation of this up and coming sport documenting season 9 of the Intel extreme masters tournament.

For those that are about to jump on about how eSports are not “real” sports, keep in mind that the validity of eSports matches the same criteria set for the more traditional sports like football and baseball. In July of 2013 game 7 of the NBA finals between the Miami Heat and the San Antonio Spurs were out watched by roughly 20% more viewers in comparison to the world finals of League of Legends. Thus helping prove the argument that eSport teams are just as popular and competitive as the traditional sports teams such as the New York Giants and Miami Heat. However the creation and continuation of such teams differ vastly as the traditional sports teams are concrete and unchanging whereas in the world of eSports the teams can constantly fluctuate, and in some extreme case become disbanded. That is the unfortunate fate that Samsung White had suffered.

What is Samsung White? 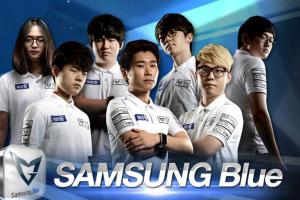 To those who are unaware of whom Samsung White were or how their downfall transpired, this is the article for you. Our tale starts in September of 2013. Before there was Samsung White there was MVP Ozone the OLYMPUS Champions Spring 2013 champion team. It was then announced in September that major electronics corporation Samsung would acquire the team to sponsor in popular eSports title League of Legends. At the time of acquisition MVP Ozone had already qualified for the Season 3 World Championships. The team consisted of members Looper, DanDy, PawN, Imp, Mata, and Dade with substitutions including Gun, HawK, Skatch, and Homme: the members listed are the usernames/ID’s of each player. With each of their roles varying from Top, Jungle, Mid, and AD, MVP Ozone was ready to perform in the Season 3 World Championship. However right before the the tournament there was a roster swap moving Homme to the sub position and putting Looper as the starter.

So how did the newly acquired Samsung team perform in this World Championship. Well after being placed in group B alongside other well known eSports teams Fnatic, Gambit Gaming, Team Vulcun, and Mineski, MVP Ozone had a record of 5-3. Tied at 1-1 Ozone had to move to a tiebreaker match where they lost thus resulting in elimination from the tournament as Fnatic and Gambit moved to the quarterfinals. A crushing and devastating performance for the former OLYMPUS champions.

Moving into the 2014 season, following their poor performance at the aforementioned World Championship, MVP Ozone went on to perform exceptionally well in OGN placing second in the winter season behind SK Telecom T1 K: a team that was undefeated the entire season. It was in this year that MVP Ozone would cast away with their old name and be known as Samsung White from June 11th onward. In addition to the big name change, Samsung White went on to win the League of Legends Masters 2014 tournament defeating the aforementioned undefeated SK Telecom in the finals. Following this large amount of success, Samsung White and SK Telecom were tied for the the second slot going to Worlds as they were both from Korea. This tie would be decided at the Korean Regional Finals where Samsung White would win 3-0.

Despite the overwhelming success Samsung White displayed in the 2014 season, the future of the team was uncertain. In November of 2014 team members Pawn, Imp, and Dandy all announced that they would leaving the team. This followed the announcement that Mata would be retiring thus meaning that they would be leaving as well. Samsung was unable to retain any of their players as their contracts expired thus resulting in the end of Samsung White.

Despite the heartbroken end of Samsung White, the team still had displayed their level of skill and prowess winning both a World championship and the title of  OLYMPUS Champions Spring 2013 champion. While the team was in fact disbanded resulting in no team being owned by Samsung, this demonstrates a trend that is all the more relevant the further we get into the 21st century. Samsung has set a precedent causing other large big name corporations like Red Bull and Coca Cola to sponsor various eSports teams and events. Through these sponsorships, these big name corporations will then rigorously advertise their respective teams thus bringing more awareness to the growing world of eSports while bringing in more fans.