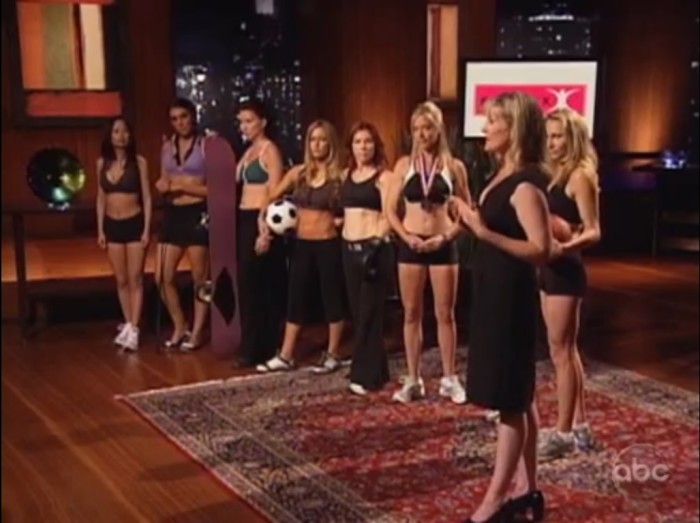 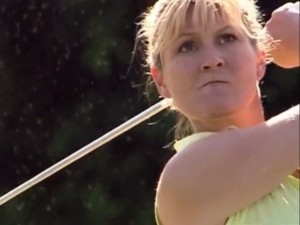 Kimberly Cayce started a company called Kalyx Technologies, producing special sports bras and other sportswear, and is a business created for women, by women. Kimberly Cayce competed around the world as a professional golfer for five years. She states that her experience as a professional athlete has truly inspired her and her business. After Kimberly Cayce ended her professional career as a golfer, she also went through a divorce, which made her feel like she really needed to reinvent herself.

Kimberley Cayce has spent three years researching her concepts, developing her prototypes and beta testing her products. She state that investors have come and gone, but right now her company is financially struggling. Kimberly invested nearly all of her life savings into Kalyx Technologies, and she states that she really needs an investment from the Sharks, or else she does not know how she will be able to keep the company going forward.

“Kimberly Cayce and eight other women wearing Kalyx sportswear, walk confidently and stand in front of the Sharks”

Kimberly Cayce starts by introducing herself to the Sharks and states that the other women are the lovely members of team Kalyx. Kimberly Cayce continues her presentation by saying that her company is called Kalyx Technologies, and that she is looking for an investment of a hundred and twenty five thousand dollars, in exchange for a twenty percent stake in her company. Kimberly states that, at Kalyx Technologies, they believe that when a women exercises, balls are the only things that should bounce.

Kimberly Cayce says that bouncing breasts might be a laughable subject to some people, but exercise induced breast pains is a serious problem, and it affects millions of women. Every Kalyx sports bra is designed to be fashionable, feminine, flattering as it is functional.

Kimberly Cayce states that each of the bras have been engineered to work with a woman’s body, depending on what kind of activity she enjoys. She continues by showing her first two sports bras, which are called the “Enlightenment Line”, and are supportive and comfortable, but they are also a little bit sexy. The next pair of sports bras are called Extreme, and they are meant for ladies who like to go fast and are not afraid to fall down. The last sports bras are called Elite Athletes, and are designed for ladies who are going for the gold. Each of the Elite Athletes bras have been incorporated with the patentable Kalyx Power Sling, which is a wireless mesh insert designed to restrict breast motion, making it possible for women to exercise without pain.

Kimberly Cayce answers the question by saying that their company is a brand new startup, and that they have been three years in development. She states that there is a wait list of about two hundred and fifty women, who are eager to purchase Kalyx sports bras. They also just got an order from a retail store, which is called The Full Cup.

“Robert Herjavec asks Kimberly is she has any projections of what her sales are going to be this year, and for the next couple of years”

Kimberly Cayce states that they have been having a rough time, and even though many people would not like to admit what she is about to say, she states that Kalyx is running on fumes right now. Kimberly also states that she has put nearly all of her life savings into Kalyx Technologies, and she is running out of money fast.

Kimberly Cayce answers the question by saying that she probably put about a hundred thousand dollars of her own money into Kalyx Technologies. She continues by saying that there are many sports bras already available, and that she was wearing sports bras that would push her breasts all the way up, or that would squeeze her breasts too hard. She claims that all of them were uncomfortable and unattractive. She states that she does not have to play like a girl, but she could still look like one.

Kimberly Cayce answers the question by saying that there are five key competitors, which are Champion, Nike, Under Armor, Adidas and Moving Comfort. She states that they have got their work cut out for them, but before they started developing Kalyx sports bras, they interviewed over two hundred and fifty women and found out that about ninety percent of those women are really dissatisfied with sports bras that are currently on the market.

Robert Herjavec states that, as an average consumer, he walks into a large retailed and sees those five companies, which spend billions of dollars on advertising, telling him that they make the best products. Robert continues by saying that Kimberly Cayce is on her own with her little company, and asks her how in the world she is going to compete against giant companies, which have distribution, have billions of dollars in marketing and every women out there knows their brand name.

Kevin O’Leary states that he cannot decide if he would rather stick needles in his eyes or give Kimberly Cayce a hundred and twenty five thousand dollars. Kevin O’Leary asks Kimberly if she knows how tough it is going to be, to be able to get a market share.

Kimberly answers the question by saying that they do not hold any patents at the moment, because Kalyx Technologies is really running on fumes. She states that they have provisional patents ready on file.

Kimberly answers the question by saying that a large portion of the investment money would go to manufacturing costs, even though they have no customers yet. She states that her company has a go-to market strategy, which means that the products will be taken directly to the consumers, through their Kalyx website.

At the end interview, Kimberly Cayce states that she thought the Sharks would be able to see the opportunity and how much passion was behind Kalyx Technologies, and how many women would really appreciate her products. 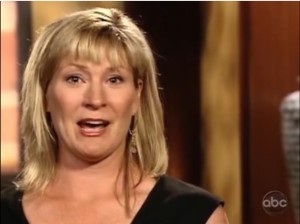 Kimberly Cayce spent three years on developing her sports bras, but she did have a single sale so far. She had invested a lot of her own money into Kalyx Technologies, and openly admitted that the company was running on fumes. This meant that she needed a big investment from the Sharks, in order to be able to start manufacturing her sports bras, and sell them to the consumers.

After appearing on ABC’s Shark Tank on September 13, 2009, Kalyx Technologies went on to raise over $500,000 in Venture Capital and Angel Investments. From 2008 until 2012, the company increased YOY sales and revenues each year and expanded into a number of high-profile gyms, yoga studios and boutiques, including Equinox, Yoga Works and Montage Resorts. Kalyx products were also sold through online through retailers such as Hautelook and in boutiques and studios around the world in Australia, Europe, the UK and South America.
Our team developed an award winning sports bra and apparel line, KALYX products were recognized for excellence in deign, including the following:
The KALYX products were then featured on celebrities such as Jennifer Anniston and Kate Hudson, and, appeared in magazines such as Us Weekly, Health, Women’s Health, Self, Shape, and Glamour.
In 2012 KALYX was acquired by ActivewearUSA.com.

Last but not least based off online reviews, users of the Kalyx sports bra state they work wonderfully and they seem to plan on using them indefinitely.