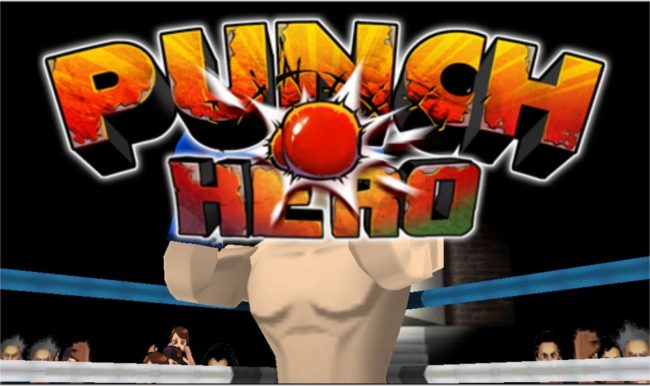 Punch Hero is a highly-immersive boxing mobile game brought to us by Gamevil (the people behind popular mobile RPG series Inotia and Zenonia). It puts you in the shoes of a pugilist as you fight opponents in the ring while training to become more powerful. It is not just a matter of button mashing and more of properly dodging moves and responding with counter attacks.

If you are longing to become the next legend in the sweet science then read on and learn a thing or two with our tips and tricks for Punch Hero.

Punch Hero is a game that requires good reflexes in order to dominate your opponents. However there is no denying the importance of leveling up stats so you can throw harder punches and survive that next knuckle sandwich.

Determine what kind of offensive play style you will go with. Do you prefer unleashing an onslaught of quick jabs? Or would you rather sit it out patiently with dodging and countering with hooks and uppercuts?  Sure you can go jack of all trades and put points on each and every move but it would be better to focus on at least two of these attacks.

For the defensive side of things you should invest on the Health stat to beef up your boxer and to obtain defensive skills. Put a few points on Mental to reduce the duration of being dazed or groggy, and to unlock important survival skills like Feinting.

Save up your Gold to buy clothes and accessories. Keep an eye out for the stats they provide so you don’t waste money. For example both the Sleveless Shirt and the X-Scarred Body offer +3 Health yet they have a 2,400 Gold difference with the former being the cheaper option. Would you waste Gold for aesthetics especially when you are not yet filthy rich? 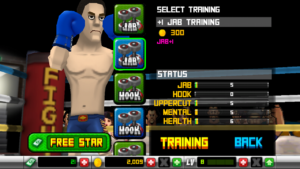 Alternatively instead of buying equipment you can spend your currency in the Training Center to boost stats. Remember though that the training cost increases per point upgraded. Also once you reach a certain stat level you can purchase passive enhancements and new moves in the Skill Shop. If you got the Stars then you should go for Regen (unlocked with 10 points on Health and 5 on Mental, costs 20 Stars). This skill lets your boxer regenerate lost Health every three seconds which is no doubt vital for any kind of play style.

Winning a fight in Punch Hero is not about spamming attacks furiously but is more on anticipating your enemy’s move and appropriately countering it. Sure the weaker opponents can be stomped to oblivion with a flurry of jabs and uppercuts but when you get to the big leagues you’ll need more than that.

Take your time to practice weaving. Go to Arcade Mode and fight a low-level boxer. Focus on dodging his blows and counter-attacking until you get a feel on how to do it properly. Keep an eye on his arms to better predict the direction that you should dodge to. Of course if you are not confident with your reaction time then you can always block the attack but this method of defense is not as good as actually dodging the blow especially since you cannot block critical attacks. 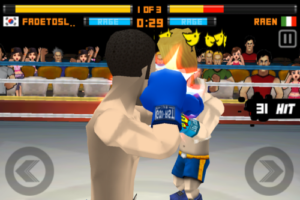 Punch Hero plays a backswing animation after you throw a punch. If you are not familiar with this then look closely when your boxer performs an uppercut or a hook, after the punch hits his arm still has to go back to the normal position. You can save a few more crucial seconds by cancelling this backswing animation. Do this by immediately dodging once your fist sinks on the opponent’s face or once it fails to land due to a weave. The backswing animation will not play out and you have gained a second or two for your next move.

For a fast and powerful combination try to follow up a hook with an uppercut as the latter will cancel out the former’s backswing animation. This combo works very well as a counter-attack after successfully dodging your enemy’s punch.

Do not begin a fight with an uppercut. That is too slow and risky. In fact it is better to not attack at all and instead just wait for your opponent to do the first move. A defensive strategy with a few jabs thrown in every now and then is a lot safer compared to becoming fully aggressive throughout the entire match. Just wait until the opponent’s health is halfway empty before considering going all-out to finish him off quickly. Save your uppercuts for a devastating counter-attack.

When your opponent is dazed or groggy (chicks circling his head) you have a few seconds to unleash a flurry of attacks. One of the best attack chains to maximize this limited time is to hit your opponent with exactly five jabs before finishing it off with a powerful uppercut. Successfully doing this also has the chance of again disabling your opponent for a few more seconds, allowing you do unleash more attacks with no fear of retaliation. Upgrade your jab speed in the Skill Shop so you can go past five jabs.

Be wary of special moves. You will get a first taste of this in the Arcade Mode when you are fighting Po-Yuan (the boxer with a hat). He can perform a powerful headbutt that takes a good chunk of your health away. Of course you can have your own set of these special moves in the Skill Shop.

The game prompts you to tap the screen quickly in the event that you are knocked down. The trick here is to use multiple fingers to stand up much faster compared to just tapping with one or two.

There are many ways to earn Gold in Punch Hero like performing well in fights especially when you knock out your opponent while taking very minimal damage. Earning an S rank on both offense and defense ratings nets you the best possible Gold reward. Once you unlock the Amateur League after defeating Haye in Arcade Mode you should move there for better payouts for your performance. Completing the Amateur League will reward you with a belt that can be equipped for extra attributes.  The Pro League has more powerful boxers who can pound you to dust if you are not prepared and well-equipped.

In both the Amateur and Pro Leagues the damage you sustain from one fight will carry on to the next. You will have to pay the hospital to recover a percentage of your health. In your first few attempts in the tournament try not to spend even a single Gold on recovery and instead just go through it even if you lose.

Prioritize winning instead of completing achievements if you are farming for Gold. Always try your best to secure a knockout victory. 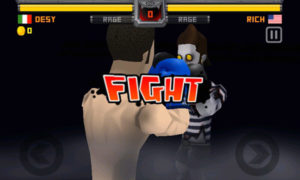 The game’s Zombie Mode pits you against undead boxers that can be taken down with a punch or two.  They can hit you hard too so don’t underestimate these rotting pugilists. You’ll get better rewards if you manage to smite them before the timer runs out. They come in endless waves and it will only stop once your boxer runs out of health. This mode is an excellent way to farm for Gold without stressing yourself too much in an actual fight (especially if you are still weak).

The Star is the premium currency in Punch Hero. Aside from buying them with cash you can obtain them for free by finishing achievements and tapping the Free Star button on the store. For the Free Star option the game will require you to download and run certain apps in exchange for huge Star rewards.

Here’s a “cheat” of sorts. When you are participating in a league and you barely have enough life left, terminate the app and run it again. Enjoy your replenished health bar without sacrificing your progress and without the need to pay the hospital for recovery.

Be careful in using “hacks” on the internet or downloading and installing modded apps that provide unlimited Gold and Stars. These can do you and your device more harm than good.

There we go with the tips and tricks for Punch Hero. Just remember to practice your reflexes and train your boxer well in order to become the very best in the squared circle. Dodge fast and hit hard, just like what the game’s loading screen tip (and Muhammad Ali quote) says: “float like a butterfly, sting like a bee”.