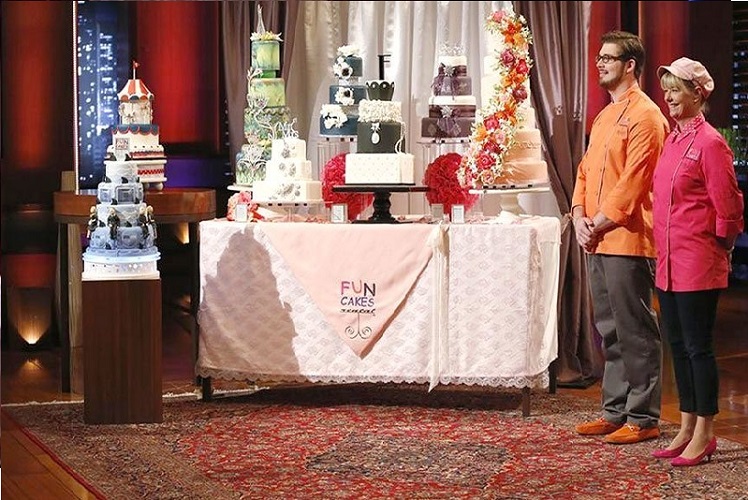 Back in the distant 1990’s, Kimberly Aya was running a speciality bakery called ‘Fun Cakes’ in Europe with her husband. When she fell pregnant with her first son, the family decided to move to Michigan to raise their family, and Kimberly continued her entrepreneurial ambitions by opening up a new bakery there.

One of the early promotional efforts she made for her new business was producing six prop cakes for display at a bridal convention. The vast majority of visitors to the show remarked on the realism of the cakes, and expressed a wish to buy the props instead of a much more expensive, and real, cake. Kimberley was inspired to exchange the heat of the oven for a new business approach, supplying fake cakes for couples who were getting married on a tight budget, or for corporate events.

A front page story entitled ‘Wedding Deception’ in the local Grand Rapids Press newspaper soon gained the newly launched Fun Cakes company a lot more recognition. Sales increased with the media coverage and soon far greater media exposure was awarded to the business. Six weeks after the local newspaper story, Kimberley was invited to appear on The Today Show and from that point on, the interest from the media never stopped.

Many other TV appearances followed, and Fun Cakes even supplied props for the 2009 hit movie ‘The Hangover’. Kimberley thought that pitching her product on Shark Tank would be a great opportunity to expand her business further, and she had a unique way to catch the eye of the producers. She sent a Shark Tank themed cake to the show, along with her application, and her unusual strategy worked wonders. Within hours of the cake being received, Kimberley received a call accepting her application.

When Kimberly finally appeared on Shark Tank, in October 2014, she was accompanied by her son and business partner Koray, and they announced they were seeking an investment of $285,000, in exchange for 25% equity in the business.

Kimberley began the pitch by explaining to the sharks that wedding cakes were an expensive item to purchase, and in the current economic uncertainty, there were many couples who wanted to have an impressive multi-tiered cake, but were simply unable to afford one, and that’s where Fun Cakes came in, supplying cakes ‘for a slice of the price’.

The sharks seemed intrigued. Koray continued the pitch, revealing to the sharks that the company had produced a cake that weight watchers Worldwide have been dreaming about for years. It had zero calories, that alone sounded miraculous, but Koray had even more benefits to list off. Fun Cakes were sugar-free, lactose-free, gluten-free and had a shelf life of over seven years.

Mark Cuban raised a dubious eyebrow, but Koray was about the reveal the sweet secret behind such an unusual cake. The younger Fun Cake entrepreneur lifted up one of the demonstration fun cakes the pair had brought into the tank, and quickly flipped it upside down. Rather than a mess of cake and icing plastering that nice Shark Tank Rug, it became instantly clear that the cake was as fake as a three dollar bill.

Kimberley explained that the Fun Cakes were made with a foam filling, but were covered with the usual gum paste and fondant, so that they were indistinguishable from the real thing. They also came equipped with a well hidden cut out section on the bottom tier, that would enable the bride and groom to perform a traditional cake cutting ceremony, without raising the suspicions of their guests.

The sharks were impressed by the innovative cake, Mark Cuban commented that he thought the idea was ‘brilliant’. Barbara Corcoran was equally as impressed, but despite the positive start, the honeymoon period wasn’t going to last for Fun Cakes in the Shark Tank.

Mark asked a few questions about competing businesses. Kimberley confirmed that although there had been some copy-cat products, no other companies would ship the cakes, and Fun Cakes shipped Worldwide. Mark inquired how long Fun Cakes had been in business, and Kimberley told him that the company had been launched seven years ago.

‘Here’s the magic question, what are the sales?’ asked Lori Greiner, but the reply was far from magical. Korey confirmed that in the previous year the business had achieved $150,000 in sales.

The sharks seemed less than impressed by the sales record, ‘That’s it?’ wondered Kevin O’Leary. Koray began talking about the gross profits from the same year, but he was soon interrupted by Mark Cuban, who voiced his opinion of such low sales and sounded even less impressed than Kevin. Kevin himself continued the interruption, telling Koray and Kimberley that such small sales, particularly after seven years in business, was a clear indication of a product that nobody wanted.

Kimberley defended the business, telling Kevin that after seven years they had built ‘an idea and a brand’, but Kevin O’Leary was not even slightly placated. ‘You haven’t built anything’ he told her, ‘In the Wedding industry you’re a pimple on a teenager, you’re nothing’ he concluded, in his usual direct manner.

There were some more questions about pricing and inventory. Kimberley informed the sharks that Fun Cakes had 150 cakes they could rent out at any one time. Lori asked what the typical price of a real three-tier cake would be, and she looked amazed when Kimberley informed her it would usually cost around $1,200. Kimberley continued, informing the sharks that her own fake three-tier cake could be rented for only $150.

Kevin O’Leary was still incredulous that a ‘Fake Foam Cake business’, as he labelled the Fun Cakes company, could be valued at over $1 million, he asked how that could be possible. Korey spoke about some of the television appearances that the company had achieved, but Kevin was unimpressed, as was Mark Cuban. Mark pointed out that although Kimberley and Korey were very proud of the publicity the company had achieved, that very exposure in the media had still not resulted in high sales, even after so many years in business.

Robert Herjavec got back to the numbers, he inquired what profit had been made from the $150,000 in sales the previous year. Korey confirmed that the business had made approximately $75,000 in profit, and he and Kimberley had paid themselves $17,000 in salaries between them.

Lori Greiner was unimpressed, and had come to a decision. She told Kimberley and Korey that she didn’t think ‘cake and fake went together too well’, she also wouldn’t want the ‘something borrowed’ on her wedding day to be the cake, and for those reasons, she was out.

Mark Cuban was next to speak, he thought the product was a brilliant one, but he had calculated that with an inventory of 150 cakes, the Fun Cakes business could easily be making over a million in sales per year. As the actual sales had been less than 10% of that figure, Mark believed that Kimberley and Korey were not ‘grinders’, they were not as committed to the business as he would expect from potential partners, and with that, he was out too.

Kevin O’Leary will often subject an applicant to a gruelling, and brutal, verbal lashing before rejecting them, but in this case he was strangely gentle. He told the Fun Cakes couple that they were ‘against love’, to the laughter of the other sharks, and that their fake cakes were incompatible with real love. Kevin may have been semi-joking, but he was deadly serious about his lack of interest in Fun Cakes, he announced he was out too, ‘with extreme prejudice’.

Robert Herjavec believed that Kimberley and Korey desperately needed someone to help with the financial side of the business. He felt that the Fun Cakes company was on a rocky financial footing, and could well be on its way to bankruptcy without a ‘numbers expert’ on hand. With that he dropped out too, leaving Barbara Corcoran as the only remaining hope in the tank for Fun Cakes.

Barbara loved the product, she thought it was a fantastic idea, and a much-needed product. The price of wedding cakes had shocked her, and she could see a good potential market for the fake Fun Cakes, but there was a problem. Barbara didn’t believe that Kimberley and Korey were ‘hungry’ entrepreneurs, their previous years salary of $17,000, between them, was ‘nuts’ in Barbara’s eyes and she didn’t believe they would succeed. Korey made a last second attempt to change Barbara’s mind but she cut him off, telling him ‘That’s it, I’m done, I’m out’ in a voice that no-one would argue with.

Fun Cakes Now in 2018 – The After Shark Tank Update

After the rejection by the sharks, Kimberley and Korey remained positive about their appearance on the show. Kimberley had believed that the Fun Cakes business would have great trouble attracting a shark investor, before the segment had been filmed, mainly due to the niche element of the product. The lack of any competition to her business made it harder for the sharks to estimate the size of the potential market, and Kimberley believed that the uncertainty over demand was the main reason for the Sharks rejection of her business.

The sharks meanwhile were singing a very different tune. As soon as Kimberley and Koray had left the tank Mark Cuban asserted that ‘anyway you slice it, the problem wasn’t with the business, it was with the entrepreneurs’, but Kevin O’Leary was even more unimpressed, ‘I thought the business sucked too’ he remarked.

Despite not getting a deal on Shark Tank, Fun Cakes are continuing to improve their brand recognition and have, in May 2016, signed an agreement with Michigan based retailer SpartanNash, who operate over 160 retail locations. As from May 2016, Fun Cakes are now stocked in all SpartanNash stores, and Kimberley continues to seek new retail partnerships in the future.

The online presence of the Fun Cakes business is regularly maintained, across multiple social media networks, as well as on the professional and well presented website, where Kimberley proudly announced the deal with SpartanNash earlier this year. The corporate end of the business appears to be booming too, with Fun Cakes supplying cakes to many corporate events, for esteemed companies such as Budweiser and Calvin Klein.

Fun Cakes may not have revolutionized the wedding industry now in 2018, but with their expansion into both SpartanNash and the 200 stores operated by Jewel Osco, it seems the demand for their fake cakes may be considerably larger than any of the sharks expected. As several people online have commented, the Sharks may well be so rich these days, that they have disregarded the effect that a tight budget can have on an already expensive ceremony.

As the Fun Cakes business continues to grow, slowly but steadily, the Aya family business can enjoy the sweet taste of success. Only the future can tell, but the sharks may end up with a bitter pill to swallow, that of the profitable opportunity that they let pass them by.