What Happened to Doug Flutie – News and Updates 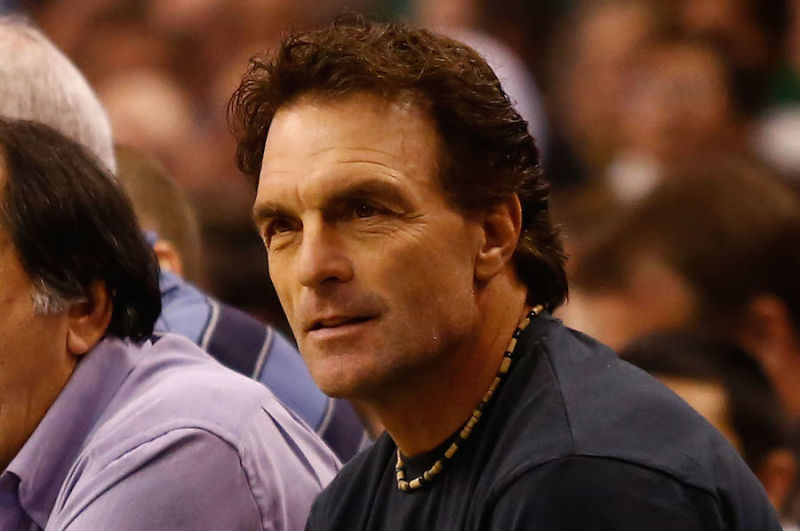 He may not have the reputation or recognition of some other quarterbacks, but Doug Flutie certainly has an interesting history. After an impressive college career, the talented-but-undersized Flutie careened from league to league in an unlikely path to fame. Flutie retired from football in 2005, but what has he been up to since then?

Doug Flutie at Boston College and the Birth of a Hero 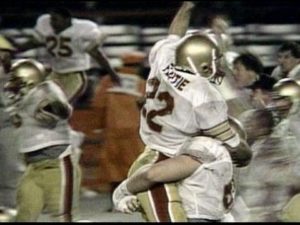 Doug Flutie was an accomplished high school athlete, but college recruiters were skeptical of him. In a trend that would follow him throughout his career in football, scouts questioned whether he could play at the next level due to his size. Flutie was listed at 5’10” and 182 lbs, which is extremely small for a pro quarterback. He was even smaller than that coming out of high school, so despite his ability, he only received a Division I-A scholarship offer from one school: Boston College.

Flutie would reward the Eagles with a historically impressive career, finishing with what was at the time the NCAA record for total yards passing. After some struggles in his freshman and sophomore years, he really started to come into his own during his junior year, passing for 2724 yard and 17 touchdowns and 15 interceptions. Those numbers would pale in comparison to those he produced in his senior season.

Flutie burst onto the scene as a bona fide college football superstar in 1984. The numbers were impressive: 2634 yards in 12 games with 30 touchdowns were crazy totals for college football at that time. Flutie etched himself in the college football history books in a hotly-contested game against Bernie Kosar’s Miami Hurricanes. BC trailed the high-scoring affair, 45-40, with mere seconds to go and 48 yards from the end zone. Flutie scrambled away from the end zone and heaved a hail mary pass to the end zone, which miraculously was completed to Gerard Phelan for the game-winning score.

The already-celebrated Flutie was the man of the hour after that show of heroics. The play was shown so much and generated so much excitement that, reportedly, more incoming freshmen started to apply to Boston College. The “Flutie Effect,” as it was later named, now is a term used in college admissions to refer to an event in sports that produces an uptick in applications and enrollment.

Flutie’s career would end the season with a wealth of awards. He won the 1984 Heisman Trophy, becoming the first quarterback to win it in 13 years. He also won the Davey O’Brien award as the top quarterback in the nation, the Maxwell Award, and an assortment of All-American designations. He was no slouch in the classroom, either, being named as a Rhodes Scholarship finalist that year as well.

With an impressive college career behind him, Flutie’s next stop was professional football. However, the same issue that dogged him during college recruitment was an obstacle again as he looked toward the NFL: teams questioned whether he could succeed at the NFL level at his size. Quarterbacks in the league averaged over 6’2” and well above 200 pounds, which Flutie’s short stature and slight frame couldn’t match.

On the other hand, the fledgling United States Football League, and upstart league of 18 teams, found Flutie very attractive. The USFL had its inaugural season in 1983. It aimed to compete with the NFL on star power, offering college stars impressive deals to come to their league, and several young players did so. Future NFL Hall of Famers such as Reggie White and Jim Kelly got their starts in the USFL, and the league ended up scoring three consecutive Heisman Trophy winners in Herschel Walker, Mike Rozier, and eventually, Flutie.

Flutie was drafted by the New Jersey Generals and became the highest-paid pro football player in history, signing a 5-year, $7-million contract. He was drafted by the Los Angeles Rams of the NFL in the 11th round, but likely would have gone higher if he hadn’t already agreed to play in the USFL. As it turned out, 1985 was the last year of competition for the league, and Flutie would be back in the NFL by 1986.

Flutie never played for the Rams, who drafted him. He was immediately traded to the Chicago Bears, where he would start 2 games as Jim McMahon’s backup, before being traded again to the New England Patriots in 1987. That was the hear the NFL players went on strike, and Flutie played as a replacement player, starting one game that season. In He started nine games in 1998, but by 1998 he was at the bottom of a four-man rollercoaster at QB. It would be his last season in the NFL for nearly a decade.

Flutie Becomes a Star in Canada

Flutie signed a contract with the BC Lions of the Canadian Football League to play with them in 1990. The money paled in comparison to the one he got in the USFL, but it still made him the highest player in the league at that time. After an inconsistent first season, he was dominant in his second season, throwing for an astounding 6,619 yards, which still stands as the professional football record for passing yards in a season. The Calgary Stampeders signed him away in 1992 and were quickly rewarded with a Grey Cup title, their first in 21 years.

Flutie would play three more years in Calgary, ending with a return trip to the Grey Cup in 1995 and a loss to the short-lived Baltimore Stallions. The Toronto Argonauts, who were 4-14 in 1995, signed Flutie that offseason. Flutie played two seasons with the Argonauts, won two Most Outstanding Player awards, and brought home two Grey Cup titles.

To say Flutie was dominant in the CFL would be an understatement. Five of his eight CFL seasons rank in the CFL’s all-time top 10 in passing yardage. He won three titles and three Grey Cup MVPs while leading the league in passing five times. Flutie would eventually be the first non-Canadian inducted into the Canada Sports Hall of Fame.

Doug Flutie Returns to the NFL

Flutie signed with the Buffalo Bills in 1998 as a backup to Rob Johnson. When Johnson got hurt, Flutie took over the starting job and was much more impressive than he was in his last NFL performance nearly a decade earlier. In 10 games, Flutie threw for 20 touchdowns, rushed for 467 yards, and made his first Pro Bowl. In 1999 he wasn’t as effective, but the team was still successful, winning 10 games and earning a playoff berth, but Flutie was controversially benched for the playoff game, which the Bills lost.

Flutie never regained his starting job with the Bills, only subbing in when starter Rob Johnson got hurt. Flutie would move on to San Diego the next year, but he was never effective or healthy enough to match is impressive 1998 performance.

In 2005, Flutie signed with the New England Patriots to serve as Tom Brady’s backup. He threw 10 passes, completed five, and did nothing else of note until the end of the final game of the regular season, when Flutie executed a drop kick for an extra point. While inconsequential to the result of the game, it was notable because it was the first time since 1941 that it had been done in a regular season game. It was the last play of the improbable-yet-amazing football career that spanned nine teams, three leagues, and two countries. 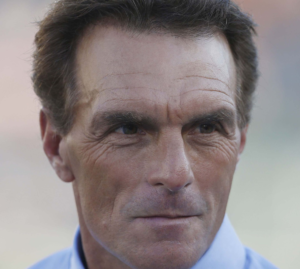 After retiring from the NFL, Flutie briefly considered returning to the CFL, even at the age of 43. He had a standing offer to play for the Toronto Argonauts as an injury replacement, but he ultimately decided against returning to football.

Doug Flutie’s brother, Darren, has always been very close to him. They both played football professionally and even played for two years together with the BC Lions in the CFL. Darren Flutie is the third leading receiver in CFL history and was inducted into the Canadian Football Hall of Fame, just like his brother. Today the Flutie brothers play occasionally in a band, aptly named the Flutie Brothers Band. Doug plays drums, while Darren plays guitar.

Doug recently jumped into the mainstream limelight by being one of the contestants on the 22nd season of “Dancing With The Stars” as the partner of Karina Smirnoff, a professional dancer. They eventually finished in ninth place.

Doug Flutie has made a life of beating the odds. From high school to college, then from the NFL to the CFL, then back to the NFL again, Flutie consistently showed his mettle by overcoming doubts and accomplishing big things. Though his athletic career is over, he still continues to make an impression on fans today through his work on TV,  And, if his performance on “Dancing With The Stars” is any indication, the surprisingly-youthful 53-year-old may have more to show to mainstream audiences still.