Denzel Washington didn’t actually decide to pursue acting as a career until he had already entered college, and yet he has managed to sustain a successful career in a space that didn’t seem to have any room for him at the time. Today, Washington is one of the most recognizable names in Hollywood. Over the course of the couple of decades, he has starred in too many films to count, having a reputation as being a strong, dramatic performer on the silver screen. Aside from being critically acclaimed, his films have also been very commercially successful. For instance, The Equalizer, a Washington film that came out in 2014, grossed nearly $200 million worldwide during its run. So, with such a long and successful career as an actor, how much money has Denzel actually made for himself?

How did Denzel Washington make his money and wealth?

Denzel Washington was born in New York in December of 1954. He lived in New York for the majority of his childhood until his parents divorced when he was fourteen years old. At that point, he was sent to a military school (Oakland Military Academy) in a different part of the state. Although he may have found the decision cruel at the time, Denzel has openly admitted that it put him on the straight and narrow for the rest of his life. Eventually, he would attend Fordham University. At Fordham, Washington played basketball and made friends, but he had dificulty deciding what he wanted to major in. A stint as a creative arts director at a YMCA summer camp inspired him to pursue acting, and in 1977, he earned a degree from Fordham in Drama and Journalism.

After putting in a lot of work, Washington made his debut in Hollywood with his appearance in the film Carbon Copy.  He was in a starring role, however the film itself didn’t attract very much attention. Denzel didn’t make his “big break” until a little later, when he was cast in the iconic NBC hospital drama St. Elsewhere. This role thrust him into the spotlight, and he became a household name as he began to taken on larger roles in major films like Hard Lessons and Soldier’s Story. He received his first Academy Award nomination in 1987 for his work in the film Cry Freedom, and he would go on to win his first Academy Award in 1989 for his work in Glory. He took home the Academy Award for Best Supporting Actor that day. 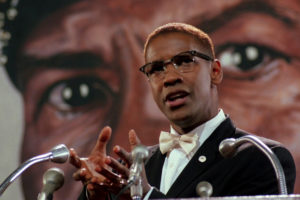 In the years that followed, Denzel Washington’s work was sort of characterized by racial and dramatic themes. Some of his most famous work came from the film Malcolm X, a biographical film about the political activist of the same name. His performance earned him a nomination for the very prestigous Academy Award for Best Actor. He didn’t end up winning that year, but he did end up winning for his work in Training Day, making him the second African-American to have ever won Best Actor. In fact, to this day, he holds the record for most Academy Award nominations and wins by someone of African descent. Some have argued that Denzel Washington’s rise to fame was solely due to typecasting, but I think it’s safe to say that his performance speaks for itself.

As of late, Denzel isn’t performing as often as he used to. It’s fully understandable that he would dial back on acting as he grew older. However, fans of this actor shouldn’t be too worried. He holds prominent roles in The Magnificent Seven and Fences, two major films that have yet to be released. He’s 61 years old, but it doesn’t look like anyone has to worry about his career ending anytime soon.

Yes, Denzel has been married to the same woman since 1983. He first met Pauletta Pearson during work on Wilma, and they have never been apart since. It seems like the flames of love are still burning for this couple, as they actually renewed their vows in South Africa in 1995. Celebrity couple don’t always have the longest “shelf life”, so to speak, but Denzel and Pauletta seem to have beaten the odds.

Does Denzel Washington have kids?

Denzel and Pauletta have four kids together. Their oldest son, John David, an actor and an athelete, was born in 1984. His oldest daughter, Katia, was born in 1986. And finally, their twins, Olivia and Malcolm, were born in 1991. Both Malcolm and Olivia have shown considerable interest in their parents’ professions, with Malcolm studying film at the University of Pennsylvania and Olivia appearing in The Butler.

When it comes to those in the entertainment business, your income can be sort of sporadic. Maybe one year you make millions of dollars, and the next year you make a couple hundred thousand. It tends to be sort of unpredictable. It has been estimated that Washington made anywhere between $40 – $60 million in 2015. This may seem like a ridiculous figure, but keep in mind that these days, Washington is able to pull in around $20 million with just a single film.

How much does Denzel Washington make per day?

Using that aforementioned salary range as a guide, we can use some basic math to say that Denzel makes approximately $150,000 per day. Keep in mind, though, that $40 – $60 million is a really large range, and it’s fully possible that his actual daily earnings are far smaller or far larger than $150,000.

Denzel didn’t really grow up with a privileged lifestyle, but he is definitely living large today. He has owned a gorgeous mansion in Beverly Hills for decades now, expanding the property as the years have passed. The house itself boasts 8 bedrooms and 14 bathrooms, while the entire property houses a large swimming pool, a tennis court, a guest house, and Washington’s personal film production offices. I think that it would be more accurate to call this place an “estate” than to call it a “house”. Apparently, it all costs him $200,000 per year on taxes alone.

Like I said before, Denzel didn’t grow up with a lot of luxuries. He’s said himself that if it weren’t for military academy, he probably would have turned to a life of crime. Like a lot of other celebrities, he puts his fortune to good use. Over the years, he has played significant roles in organizations like the Boys & Girls Clubs of America, Wiley College, Brooke Army Medical Center, and the Fisher House Foundation. As he has grown older, he has become significantly more socially involved than a lot of other actors and actresses are. He attends fundraisers, he makes substantial donations, and he has been a spokesperson.