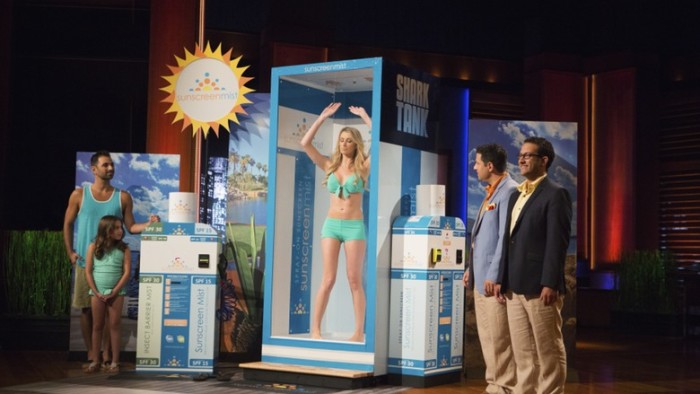 Tony Fayne quickly became a man with a vision after one of his close friends was diagnosed with melanoma, a deadly skin cancer, at an extremely young age. Typically caused by the harmful ultraviolet rays that radiate off the sun, Fayne was determined to create something that would help to prevent people from carelessly subjecting themselves to cancer just because they forget to apply sunblock before heading off to the park or beach.

After partnering up with his good friend Josh Kaplan, the two men put their heads together in hopes of inventing something revolutionary. During 2007 they generated Sunscreen mist and calculated that about 30% of people ventured outside without properly applying sunblock to their skin which left them vulnerable and at risk. With the help of their new product, both Tony and Josh were hoping to keep people protected by offering them a simple and easy way to lather up in sunblock.

The Sunscreen Mist has 3 different designs that can be sold to amusement parks, golf courses, beaches, and a plethora of other venues. There are fully automated misters that cover the body in sunscreen automatically, a dual user which allows someone else to apply the sunscreen, and a single user station. Each station provides the user with a variety of sunblock options. SPF coverage ranges from 15-30 and the applicant can request additional bug repellent coverage or even a toned tan enhancer. 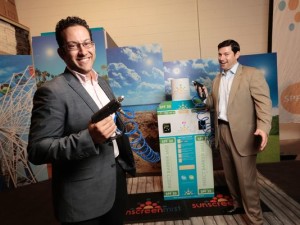 Tony and Josh really just wanted to create a quick and convenient way for people to stay safe while also having tons of fun in the sun. However, being two men new to the business who already poured a great deal of their money into the invention of the product, finding the funds to get their business of the ground proved to be rather difficult. That was why they decided to head over to ABC’s Shark Tank. Hopefully they could convince one of the Sharks to invest so that their dream of making Summers safe and fun a reality.

With introductions out of the way, Josh starts off by asking for a price of $400k for 15% of Sunscreen Mist. After their asking price is laid out on the table, they quickly jump into delivering their sales pitch. Most people lack the time or memory to apply sunscreen, and even when they do, most people fail to properly apply the lotion. That is where Sunscreen Mist stations come in handy. Their product is the first to apply the correct amount of sun lotion recommended by the FDA. Additionally, this machine also eliminates the tag team game plan that usually comes with applying sunblock and ensures the full coverage of your body. Each station accepts cash and credit, but maybe also be formatted to charge hotel rooms through hotel keys. After payment, the client need only step into the booth, select their preferred sunscreen, and then receive a full body mist. The whole process takes only a handful of seconds which makes it extremely convenient for people who are rushing around during their vacation. The dual operated system also allows for quick coverage, but instead of having it applied automatically, the user must use the spray gun themselves.

Kevin O’Leary is the first to speak up, arguing that people have been using sunscreen for an extremely long time and have not experienced much trouble with it. He asks “have you solved a problem that doesn’t exist?”. Josh is quick to answer by mentioning that over the past few decades, the number in skin cancer patients has been steadily increasing at an alarming rate. It is now the most popular form of cancer. O’Leary still doesn’t seem convinced, but the duo insists that their product will making sunscreen more accessible for people. Robert Herjavec and Lori Greiner both noticed that their assistant who demonstrated the station didn’t have her stomach covered in the booth, but Kaplan explains that the booths can be programmed for their location of dispensing. They can modify the time of the mist, the depth, and strength of the spray jets. Herjavec asks if they have any stationed anywhere. According to Fayne, Sunscreen Mist stations can be found in Florida, New Jersey, and New York. As for pricing, this is determined on the placement and can range from anywhere between $1-$5. O’Leary fails to see the point in paying $5 for an automated spray when he could just buy an entire bottle of sunblock on his own.

Each automated Sunscreen Mist station is sold at a retail price of $31k while the dual station is $17k, which surprises most of the Sharks. After selling 12 units to 7 different customers, $325k in sales over the last 3 months. Lori Greiner asks who was paying for their product, and they tell her that Sunscreen Mist operated at the Governor’s Ball in New York and they received 1,300 customers over the course of 2 days. Mark Cuban decides that they are basically like an ATM business where they sell their product to vendors and hope that they will be capable of paying it off. Though that is one way of using it, they will also sell directly to corporate company, like MGM Grand. For two years they did a proof of concept with them and received about 250 customers a day, but decided to pull back after the resort redid their pool deck area. O’Leary asks why they don’t just create a leasing program, and they were actually talking to a large company that does that with hotels across the country. However, they also want to be able to sell to grinders like themselves.

Finally, when it comes time to invest or not invest, Barbara Corcoran decides that, because their entire business plan comes off as way too confusing and their product is too bulky to sell, she will not invest. Herjavec feels similarly, unable to follow their plans, and follows suit right after. Mark Cuban tells them that they over exaggerate everything and make claims of selling retail, but have no retailers to sell to. He beings to lose his mind when the duo tells him that during their proof of concept trial, they weren’t even sure if they wanted to commit to the company. “That is the embodiment of who you are”, states Cuban before pulling out. Wishing they would have had more proof of concept so she could tell that their product was selling, Lori Greiner also does not invest. Tony attempts to resell their idea, but before they could even finish the pitch, O’Leary drops out. With the last Shark off the table, the Sunscreen Misters have to walk away from the Shark Tank empty handed. 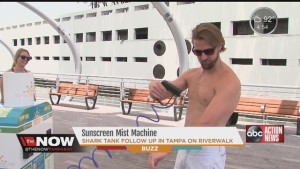 Despite leaving the show without any extra money in their pockets, Tony and Josh refused to give up on their company and goal of bringing down skin cancer cases in America. They launched a website (http://www.sunscreenmist.com/) for Sunscreen Mist where they offer people a variety of information. There is a map that showcases all areas that are distributors of the product, the product themselves, and even the original sunblocks that are found within each station. Sunscreen Mist has been mentioned and featured in various news and blog posts which has definitely helped to increase their popularity and recognition across the country and they even run their own blog to share with people the experiences they have made during this journey so far. Even without the help of the Sharks and their overall disapproval, Sunscreen Mist is still a functional business that has its feet on the ground.