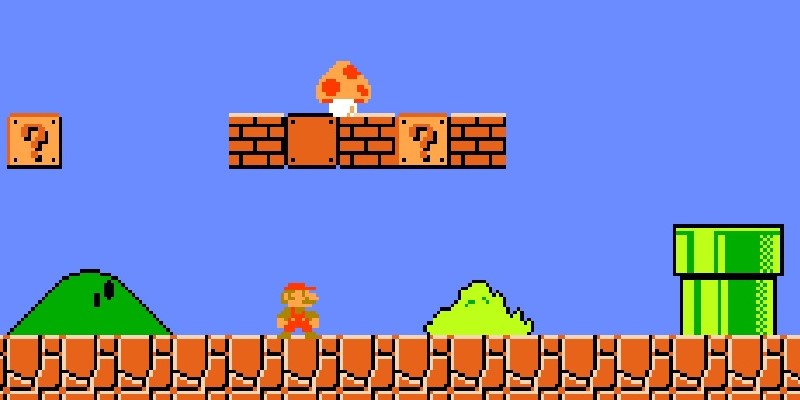 A lot of people complain about how expensive video games have become. Base games typically cost upwards of $60, and when you add downloadable content, expansion packs, and occasionally micro-transactions, the price continues to grow. For video game collectors, though, this kind of price tag is absolutely nothing. There are games out there whose values exceed the average car payment. In this article, I’ll talk about the top 10 most expensive and valuable video games. Try to take some of the estimated price ranges that I mention with a grain of salt. If you happen to find one of these games in your attic, its value would also depend upon its condition, its region, and whether or not you have the original package and manual. Not to mention, some variants of a game are more valuable than others. With that being said, let’s take a closer look at some of the priciest treasures that the gaming world has to offer. 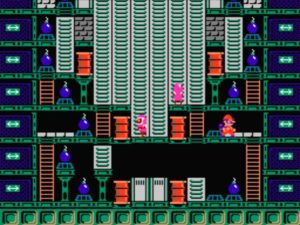 Wrecking Crew is one of the least well-known Mario games out there. The game was released in 1985, and it was actually bundled with a lot of Nintendo Entertainment Systems upon the console’s launch. Gameplay is fairly simple. Basically, you are looking to destroy certain items with a large hammer. Each level is different, and the fact that the player character is unable to jump means that each level presents a new puzzle. The game has become popular in recent years, but it obviously never became as popular as some of Mario’s other games. How is it so valuable? Although the game was originally bundled with the NES, it still possesses a lot of value in a mint condition, factory sealed form. It has sold for $1,000 and up in this sort of condition. 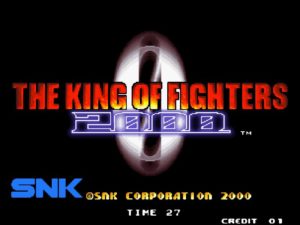 The Neo Geo AES console is one of those consoles that no one ever really owned. At the time of its release in 1990, it was ridiculously powerful. Its hardware was much more powerful than most hardware that you could find inside of a personal computer. (Compare this to today, where most consoles are significantly weaker than personal computers.) Befitting its specs, the Neo Geo was sold for close to $650 upon launch. Its sales were really low, since most people weren’t willing to part with that kind of money for it. The King of Fighters 2000 is a competitive fighting game that was really popular on other platforms, but it saw a limited release on the Neo Geo AES. It has been rumored that only around 100 copies of this game exist. 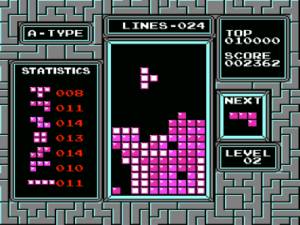 If you’re a living and breathing human being, I am willing to bet that you have played Tetris at some point in your life. Most people first encountered the game on a Nintendo Entertainment System, an original Gameboy, a Super Nintendo Entertainment System, or some other Nintendo console. Well, did you know that before a Nintendo-exclusive deal was inked, the game was about to get onto the Genesis? It is rumored that around ten copies of the games were created and distributed before Nintendo called for a recall. Today, Tetris is arguably one of the rarest titles that you can try to find for the Genesis. There have been instances of people trying to sell this special version of the beloved classic for upwards of $1,000,000 dollars. However, the price range listed above is considered a slightly more reasonable going price for this collectible. 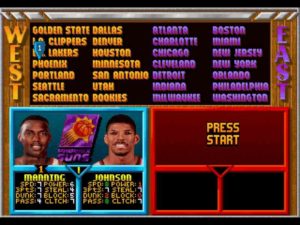 The next item on our list brings us to another Genesis game. It is also our first “specialty” cartridge. You see, during the 1990s, video game publishers and distributors liked to host different gaming competitions, some of which were pretty massive. In order to hold these competitions, custom cartridges were made and packed with modified games, making them ideal for competitive play. This particular cartridge was used in the second Blockbuster World Video Game Championships. If you’re ever able to get your hands on this cart, you’ll find that it contains altered versions of Judge Dredd and NBA Jam Tournament Edition. The event was held in 1995, and gaming was held on both the Mega Drive and on the SNES. The SNES cartridges were distributed as prizes to the contest’s winners, and the Mega Drive cartridges were actually ordered to be destroyed upon the contest’s finish. Obviously, some of them made it into the public. 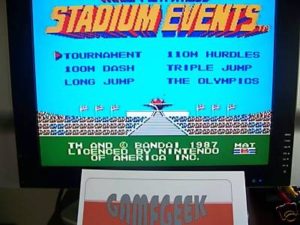 Before games like Wii Fit and Just Dance flooded the market, Nintendo gamers had to look to other sources to get their “fitness” fix. This game was released alongside a power pad controller, which was basically a roll out DDR-style mat that was used to participate in the game’s running and jumping events. Players would line up on different sections of the mat and run and jump on the different buttons to participate in athletic events. Stadium Events was released in September of 1987, but very soon after its release, the game was recalled so that it could be rebranded. The NTSC original release of this game is considered one of the rarest NES games out there, and it has sold for close to $35,000 in good condition. When you exclude variant titles and exclusive cartridges, Stadium Events actually does hold the honor of being the most valuable game for the Nintendo Entertainment System. 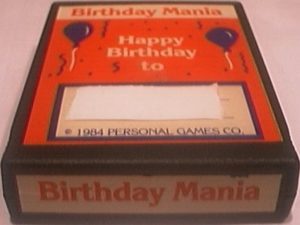 The next game I’m going to talk about is sort of a weird one. Birthday Mania isn’t a game so much as it is a novelty. The game is intended to be given as a birthday gift, and it is packaged in a box that allows the gift giver to write the recipient’s name. The gameplay itself is mostly sparse, and it consists primarily of mini-games. In these mini-games, the player will do things like blow out candles and pop different balloons. This game may seem kind of lame, but consider that it was created by an independent programmer and only advertised in a local newspaper. The game is said to have sold between 10 and 15 copies, although apparently only a few verified copies of Birthday Mania actually exist. Although independent games today are usually pretty inexpensive, the unofficial means of this game’s distribution and production make it really hard to pin down, which only makes it more valuable in the eyes of a collector. 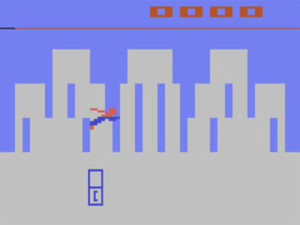 Superman was actually a fairly popular Atari 2600 game upon its release, and a lot of people have owned and played it. Before you go digging in your basement for this game, though, recall what I said before about certain cartridge variants being worth more than others. The Sears Telegames variant of Superman is one of the rarest Atari 2600 cartridges out there. This particular game is easily identified by its Sears Telegames label, as well as its yellow text. Most people own the standard version of the game, which has red text on the label. This version is worth pennies compared to the Sears Telegram variant. This is also the rarest Sears Telegames variant that is currently in existence, and people will spend good money to get their hands on it. A boxed copy sold for around $30,000 on eBay a couple of years ago. 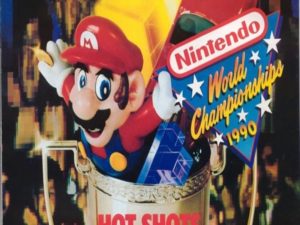 The 1990 Nintendo World Championship cartridge is another rare competition cartridge, and it is substantially more valuable than the Blockbuster cartridge that we talked about earlier. The custom cartridges contains custom mini-games based on Super Mario Bros., Rad Racer, and Tetris. The cartridges themselves have been distributed in two variants: grey and gold. The grey cartridges were given to the competition’s finalists, and the more rare gold copies were distributed in a separate contest held by Nintendo Power magazine. This cartridge is widely known as one of the most valuable NES cartridges in existence, with its relatively large quantity makes it common enough for people to know about, but with a certain mystique that makes it rare enough to be valuable. (As you can imagine, people are more reluctant to part with a Nintendo World Championship cart than they would be to part with a Blockbuster World Championship cart.) 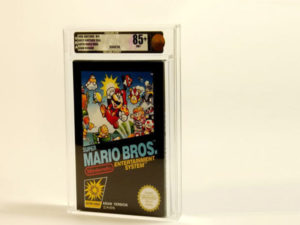 The next game on our list is a highly sought after variant. The Asian version of Super Mario Bros. (identified as such by a convenient ASIAN VERSION label located towards the bottom of the game’s box) is arguably one of the most valuable variants in the video game collecting world. Like Tetris, pretty much everyone has played Super Mario Bros. However, this special cover is what makes the game as valuable as it is. This cartridge is unique in that, although it is technically an NTSC copy, is capable of being displayed in Cantonese. This may seem like a minuscule difference, but it makes a world of difference. In November of 2012, this variant sold on eBay for a whopping $25,000. For comparison, a standard, loose copy of Super Mario Bros. for the Nintendo Entertainment System will typically sell for a few bucks in a garage sale. 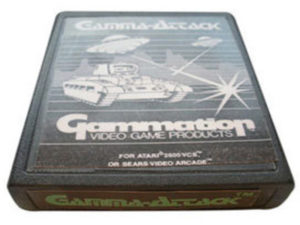 I’m sure you’re reeling from that price tag, but allow me a second to explain myself. Gamma Attack is a game that technically never existed. It was originally “distributed” by a company called Gammation, which is only known for having had produced peripherals for Atari systems. Although there have been rumors over the years that Gammation may have developed a few games, there was never any evidence. Until 2008, that is. Apparently, only a single copy of this game is known to exist, and its owner is really hesitant to part with it. He has said that the gameplay is unremarkable, but that the game probably would have done well if it were released when the 2600 was popular. You play as a UFO, and you’re able to shoot at tanks on the ground. When you’re dealing with a game that only has one copy, that means that the game’s owner is really able to dictate what the game is worth. In this case, a whopping half of a million dollars.