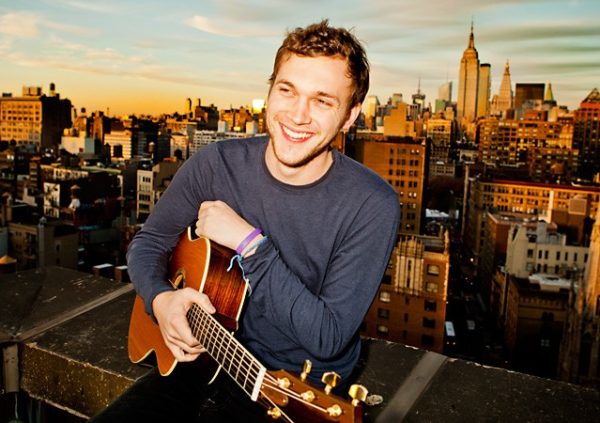 With a powerful blend of bluegrass, alternative rock and an indie vibe, Phillip Phillips has made quite a name for himself. Since his debut on the eleventh season of American Idol, he has hit record store shelves, gained millions of views of his music videos on YouTube, and of course been on the radio more than anyone would care to count. Let’s see what he has been up to in 2016.

The Birth of an Idol

Born in Albany, Georgia, Phillip LaDon Phillips Jr. is the third of three children. Growing up in nearby Leesburg, Georgia, Phillips often found himself listening to giants of the ’60s and ’70s such as Hendrix and Zeppelin while helping at his family’s pawn shop. At the age of 14 he first picked up the guitar and received instruction in how to play, and within 3 years had his first shot at fame with an audition on America’s Got Talent. While unable to advance to fame with America’s Got Talent, Phillips had a taste of the spotlight and kept at his craft, all the while working at his family’s pawn shop and attending Albany Technical College, aiming for a degree in Industrial Systems Technology.

In his final year at college, Phillip decided to give himself one more chance at the big stage, auditioning for American Idol in Savannah, Georgia. With his performance of Stevie Wonder’s “Superstition”, he was quickly a judge and fan favorite with his follow up of Michael Jackson’s “Thriller”, using his acoustic guitar alongside his powerful voice. Before he knew it, he was skipping his own college graduation to perform for the Hollywood and Las Vegas rounds of American Idol.

While he was never in any real danger of being voted out of the competition, Phillips almost left the show in later weeks for a much more serious reason. Throughout the taping of the show, Phillips was hospitalized and had no less than 8 procedures due to a congenital kidney disorder that allowed for the creation of stones far too large for him to pass, causing him immense pain and giving him the decision to quit, or keep going through the pain. Luckily for his fans and his future, he was able to persevere and won the title of American Idol, kicking off his musical career.

After winning the 11th season of Idol, Phillip’s musical career took to the stars immediately and never looked back. Within weeks after the Finale, his first song “Home” had more downloads than any other song from the competition. With this single, he also managed to be part of the soundtrack to the 2012 Olympics, the 83rd Major League Baseball All-Star Game, and joined with several other acts to honor the Dalai Lama.

In late 2012, he released his first album, The World from the Side of the Moon, which made it to number 4 on the Billboard 200. The following August, his record had been certified platinum. With this as a catalyst, Phillips kicked off a series of tours around the United States which such bands as Matchbox Twenty and John Mayer, as well as a solo tour through Canada.

Between tours in 2014, Phillips released his second album, Behind the Light, which carried in it the single “Raging Fire”. According to critics, “Raging Fire” was reminiscent of “Home” and was received with great acclaim, turning the album into a huge hit in terms of sales. Later in the year, he announced his engagement to longtime girlfriend Hannah Blackwell, and they married in 2015.

At the start of 2015, Phillips had been engaged in some legal disputes with his label, 19 Recordings (one of the production companies in charge of American Idol). Initially this suit began as a result of Phillips claiming the record label was being oppressive and wishing to void his contract. Then, the court case escalated as after 19 Recordings had filed for Chapter 11 bankruptcy, they pursued the 25 year old singer for $6 million in a New York Court (for $1 million they claim as owed to them by Phillips), as opposed to the California jurisdiction in which Phillips had filed the complaint. While the case appears to still be ongoing, it is a widely accepted prediction that as a result of the company’s bankruptcy and attempt to move the case out of a state that is deemed to often protect the artist, they have very little ground to stand on.

Outside the courtroom, Phillips has continued to enjoy quite a bit of popularity. Being one of the performers to sing goodbye to the series that made him, he has also performed at the international Invictus Games in Orlando, Florida this past May. As of June 1 according to social media accounts, Phillips has also been working on his third studio albums which has fan and critic alike quite excited. It would seem that with or without his record label behind him, Phillip Phillips has quite a bright future ahead, and many songs left in him to perform.