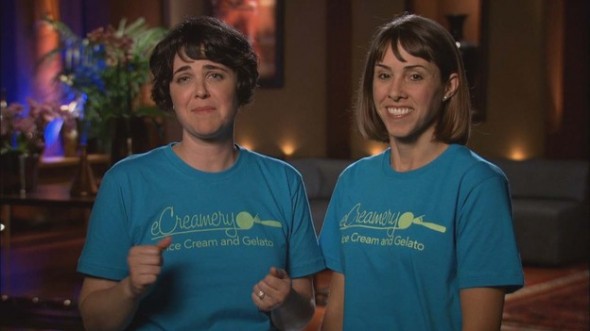 Before Shark Tank, eCreamery was a real ice cream parlor in Omaha, NE. They started the online segment of the business and made all of the ice cream they sold in house. They already had an investor that owned a large part of the firm. Would this be an issue for the Sharks? 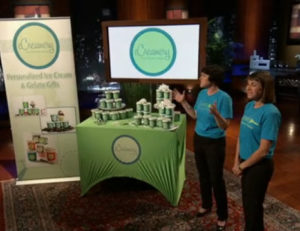 This segment started off with the company’s audition tape. It featured their physical store in Omaha Nebraska. The video showed the pair serving a family of customers. The customers were greeted as they entered the store, and then went immediately to pick up the order. The owner described ice cream as the ultimate comfort food, as children smiled, waiting for their sample. They showed the ice cream being made with chopped fresh fruit and crushed cookie crumbles. The video continued, showcasing fresh ice cream scooped from the machine and ladled into the long metal containers. The two owners claimed that they gave up successful careers to start this business. They contended that it was just them building each pint from scratch. They said that they were looking for an investment from the Sharks to help them scale up the business.

Abby Jordan and Becky App walked out onto the stage and introduced themselves. They said that they were looking for a $250,000 investment in exchange for a 33% stake in the company. Abby claimed that they were the only ice cream business in the industry to think of ice cream as a gift. Becky argued that the days of giving flowers were over once the business really got big. They directed the Sharks to their website, where you can choose from 50 different flavors of ice cream, sorbeto, or gelato, and a bunch of different mix-ins. You then get to name your flavor, and then they deliver it to your doorstep. Abby then passed around sample pints that were personalized for each of the Sharks. Robert got “Robert’s InvestMINT Mix.” Barbara received “Barbara’s Delicious Dividends.” Kevin, or course, got “Mr Wonderful’s Shark Bait.” Daymond got his “Fashionable Flavor Factory”, while Mark received “The Cubanero.”

As they all dug into their pints, Kevin was first one to comment. “Wow, that’s good!” That is an impressive comment from the notoriously hard to please Shark. The rest of the Sharks also voiced their appreciation. Barbara mentioned that it was pretty heavy for ice cream, and Becky informed her that it was premium. Kevin then jumped right into the money. He pointed out that their valuation was an impressive $750,000, and asked them if they had any sales. Becky told him that they’d sold two million dollars since they started the business in 2007. The Sharks mostly seemed impressed, but Kevin wanted to know how many sales they’d had this year alone. Abby cut in, stating that they had made $750,000 in sales so far this year. Kevin asked how much they made on that, and they told him $60,000. Kevin looked taken aback.

He asked them why their margins were so low, but they informed him that their margins are 60%. Kevin asked them where the rest of the money went. Becky said that they spent a significant amount of money on building their infrastructure, from the machines to the shipping method, and the trial process of making their core recipes. Robert asked how much the product costs for the customer. She said that it costs $55 for four personalized pints of ice cream, plus shipping. Abby told them that Second Day Air shipping is $25, which is a charge that is added to the customers tab. Kevin was surprised that the total cost of the gift was $75-80. Mark cut into the conversation, saying that $80 was very expensive for 4 pints of ice cream. Becky said that when they run into that question, they ask the customer how much they spent on flowers the last time they bought them.

Robert said that that was a good point. Roses cost him about 250 dollars every time his wife gets mad at him. Abby stated that they have an all apologies pack of ice cream for just that scenario. Kevin asked the pair if they make all the ice cream themselves and they told him that they did. He asked them why and looked genuinely confused. Becky said that he couldn’t just think of it as 16 ounces of cream and sugar, but as a heartfelt message. Kevin kept squinting at them in confusion. Robert said that he loved the idea, and the pair looked at him hopefully. He stated that it might be expensive if you just looked at it as ice cream, but it was reasonably priced a lifestyle experience.

Mark asked what they were doing to get customers, and what that process cost them. Becky said that their entire marketing budget was spent on online marketing. Kevin repeated Mark’s question, asking them how much it cost per customer. Abby told him that each client costs about $20, but they were highly likely to repeat purchase. Kevin asked how many times, and Becky said to him about twice a year. Kevin wondered how much profit he is likely to get from a customer, and Becky repeated that their margins are 60%.

Robert asked them how much it cost to get into the business. Abby said that they purchased a non-functioning ice cream website with their investor, and they turned it into an ice cream gift site.Kevin asked how much their investor owns in the company. Abby told them an impressive 70%. All of the Sharks exclaimed their disbelief about that amount. Kevin asked how much he invested, and Becky told him $600,000. Robert asked them if it was Warren Buffet, and Kevin stated that he bought into a concept of ice cream at a valuation of over a million dollars. Becky said that their investor is a successful venture capitalist that would like to work with one of the Sharks. Daymond expressed his confusion, asking if the investor knew that they were offering 33% of the company. The pair said that he did.Barbara asked if it was part of his share, and Abby confirmed that it was.

Mark asked them what they thought would get them to the next level. Abby said that they were looking to get a new manufacturing facility since they currently make and ship everything from their own ice cream store. Robert asked them if it would make sense to have both the retail and the online presence, or if they shut down the retail store, would their online store be more profitable.They affirmed that it would, and Barbara looked shocked. Kevin said that he was getting intrigued. He decided to make them an offer. He stated that he values promotion. He offered $125,000 in exchange for 25%. Barbara looked surprised and said that the asking price was $250,000. Robert pointed out that Kevin was looking for a partner. Mark called it a bogus strategy. Kevin told him to be quiet or join him. Mark says that if he wants to make a deal, he should just do it without relying on anyone else. Kevin said that he didn’t want to do that because the cost of customer acquisition is huge, and eCreamery needs a significant amount of promotion to work.

Daymond said that his big problem with the deal is that there is already an investor that owns 70%. He doesn’t want to put in his own money and time just to have the other investor reap the profits. He was the first to go out. Robert cut in, saying that he loves the idea. But he stated that there was too much going on with the other investor, the online presence, and the bricks and mortar store. As he went to say that he would be going out, Abby tried to stop him by saying that they really wanted to focus on the online aspect as they knew that was what was going to scale. Barbara said that the best idea that she heard so far is to shut down the store. She stated that she is not interested in being a partner, and she went out. Becky said that they were very disappointed, they were looking forward to working with her. Barbara said that she would love to work with them, but she doesn’t think she would get her money out, and she would start to hate them.

Kevin asked Mark where he was with the deal. He said that he loved it. But he told them his favorite quote. He said “First, there are the innovators, then come the imitators, and then there are the idiots. He told the girls from eCreamery that they were the innovators, but they had a high potential of being imitated, especially on a local level. Mark went out. This left only Kevin, and his lowball offer. He stated that he went the way he did because they have to go through the process of teaching America that ice cream is a gift. He told them that their ice cream was excellent, and Barbara chimed in that it was the best she’d ever had. Abby said they would hit 5 million dollars in the next 5 years. Kevin told them that he had bad news, and Becky begged him to reconsider. Kevin said that he was out because the other Sharks did not want to join in with him. He said this as he continued to shove eCreamery ice cream into his mouth.

Abby and Becky looked disappointed, but they thanked the Sharks for trying eCreamery’s product, and for loving it. They walked off of the stage. In the post interview, they acknowledged that the Sharks liked their product. Abby called them crazy for not taking the sweet deal, and she said that they were even more motivated to make it a success. Were they successful in that?

eCreamery Now in 2018 – The After Shark Tank Update 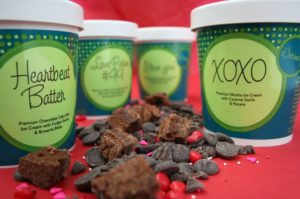 Even though the Sharks did not bite on eCreamery and it’s website, the business still got a boom from the Shark Tank effect. The exposure from the show massively boosted their sales, and they were able to hire more employees, and get a few more freezers. They’ve gotten a lot of press, and even Warren Buffett and Paul McCartney took notice. They visited the ice cream parlor in the summer of 2014. eCreamery ice cream was also featured as a prize on The Price Is Right.