When creator Bobbie Rhoads’ children were 11 and 7, the 7-year-old Dylan was a very picky eater. In order to get her daughter to eat healthy food, Rhoads would spend lots of time cutting it up into little pieces. She ended up inventing something that would let her kids cut the food up into fun shapes all by themselves. The product caught on at local shows, as well as trade fairs. Bobbie got Fun Bites into Buy Buy Baby and on Amazon. Before going on Shark Tank, her company had already made $400,000 in sales. 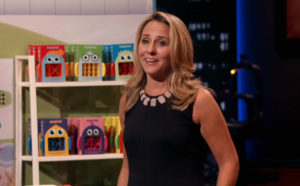 Bobbie Rhoads walked calmly and confidently out onto the stage. She asked for $75,000 In exchange for a 20% stake in the company. All of her products were displayed like they would be in a storefront on the stage.  She claimed that Fun Bites make eating fun.  She stated that there are over two million children who are picky eaters in the  United States alone.  According to Bobbie,  large food companies have already targeted these kids to eat “their sugary, colorful snacks, and their funs-shaped, not so healthy nuggets.” She told the Sharks that she had done research that showed that kids are more likely to eat healthy foods when they are but up into fun shapes. She also said that you should allow them to play with their food. This would make the children more receptive to new and healthy foods.

Bobbie then walked over to the Sharks with a tray full of food samples, as well as a FunBites cutter for each Shark. Each Shark took a FunBites cutter, and some of them took a plate of sandwich that was precut. She walked back up to the stage and then invited a Shark up to try the product out. Kevin was the first to bite, claiming that he was a chef. Mr. Wonderful then used the cutter on a slice of cake that cut it into little sharks. He used the “popper top” to pop all t=of the pieces out of the device. Kevin seemed impressed with how quickly it worked. The pieces popped right out.

Lori asked how many shapes there are as she tried the product out on a waffle. Bobbie said that there were three different shapes at the moment, squares, hearts, and triangles. There was a funny moment as Lori forgot to take out the attachment, and was unable to cut the waffle. The Sharks walked back to their seats.

Mark asked her why she had not grown the business more in the last three years since all of those great companies were showing interest. She stated that she had sold to a couple of large retailer at the start, but the clamshell packaging made the product unappealing. It slowed down sales. She recently revamped the packaging. Lori asked to see the new packaging. When Bobbie showed them, Kevin declared that he liked it.

Daymond then asked where she was doing the manufacturing. Bobbie announced that they made it in Connecticut. Mark wondered how much it cost to make versus how much she sold it for. She said that it cost $1.72 to make each unit, which she then wholesaled for $6.00 a piece. The Sharks seemed impressed. Robert declared that it was a good margin. Kevin expressed his concern that the retailers had stopped selling the product, and wondered if they would take it back now that the packaging had changed. Bobbie said that she spoke with a few of her former retailers after she changed the packaging. Kohls expressed interest and wanted the product for its kitchen section.

Lori then asked if Bobbie had a patent on her FunBites design. Bobbie said that she had just gotten a utility patent for cutting food into small shapes. The Sharks asked where she had gotten the idea. She said that she went to Carnegie-Mellon and then worked at a large company as their VP of marketing. When she took time off to focus on her children, she realized that she had super picky eaters. After some trial and error, she achieved success with getting them to eat healthy food when she cut it into small pieces and let them play with it.  Kevin said that his kids were also picky eaters, and he asked his wife if he could just let them starve if they did not like what he put in front of them. Mark said that the two hours of screaming that would occur afterward is not worth it.

Daymond asked to what Bobbie attributed the $40,000 in sales.She said that she just launched the new website, and, at the time, it was back to school season. Lori cut in to ask if she was including the trade show in that. Bobbie said that she had gotten 25 sales at the trade show, some large, some small. But she stated that people were actually seeking her out. Disney was one of the big names that she mentioned, and that made Daymond’s eyes light up. Kevin said that is tough to get Disney, and he sounded impressed.

Bobbie said that she has been trying to get on the show for 3 years. She needed help with the logistics, but she insisted that she already knew how to sell her product. Robert extended his congratulations on her making it there. She looked like she was about to cry. She stated that she was jubilant to be there. Robert said he knew how hard it was to make it there. He asked her what she wanted with the money. She stated that she wanted it to open up doors for her to get into big box stores. She also wanted to explore licensing potential. She sounded like she was over her head in these areas.

Bobbie said she was also expanding into the special needs market with FunBites. The product was rated by Able Play, which judges what are good products for Autistic children. She stated that Autistic children particularly loved the square pieces because the shape made sense to them. Kevin went out at this point, saying that he did not see world domination in the food slicing market. He did not agree with the messaging behind it.

Robert went next. He said he was a stay at home dad for three years. He said he also had picky eater children. He would cut up the food into different shapes with a knife. He stated that it made him nervous that the alternative to the product was simple. You can just take a knife and cut it into shapes yourself. He was next to go out. Bobbie looked very nervous.

Daymond said that the licensing opportunities moved him. He offered her more than her original offer. He put $100,000 on the table in exchange for a 30% stake in the company. He said that he increased the percentage because of the work that he would need to do with the licenses. Lori was up next. Bobbie said that it would make a great QVC product. Daymond interjected that he had made her an offer, but Bobbie graciously deflected that. She stated that it had taken her so long to get there, and she wanted to hear all of the offers before making a decision. Lori then declared that it was deal time, and Bobbie looked absolutely thrilled.

Lori said that she should blitz the market. She has ties with major retailers, and she thinks that Bobbie should continue work on the website. She offered $75,000 for 25% equity in the business. The Sharks all started talking over one another. Daymond asked Lori how many products she had licensed. She said that she had actually licensed five products. At this point, Daymond stated that he was the one to go with in regards to licensing. They were all still talking over each other. Daymond amended his offer to $100,000 in exchange for a 25% stake.

Lori waited until Daymond was done speaking and then stated that she thought Bobbie wanted to partner with her. She also lowered her equity stake to 25%, which is what Bobbie was initially asking for. In exchange, she asked her an answer immediately. Bobbie agreed. The two hugged. Mark said that she had made a mistake by not even giving him a chance to make an offer. He suggested that it was not too late to change her mind. She cut him off and stuck to her guns. She said that she knew that Lori was the right partner for her. Bobbie asked if Lori would like to bring Mark in, and Lori immediately said no. Everyone wished her good luck, and she walked off with the deal she wanted.

Funbites Now in 2018 – The After Shark Tank Update 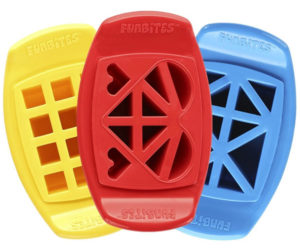 Since Fun bites creators appeared on Shark Tank, their sales have skyrocketed. Merely days after the show air, they raked in $150,000. Working with their Shark Tank mentor, they expanded their reach worldwide, and to many different retail stores. Sales are booming. You can purchase their products at many different retailers. The Funbites product is available all over the United States, as well as Canada, Singapore, Malaysia, and India, to name a few places. You can also buy them online on Amazon, Luna Bella Boutique, Nordstroms, as well as their website. I might invest in the Minions Fun Bites to make healthy eating a little more fun for me.