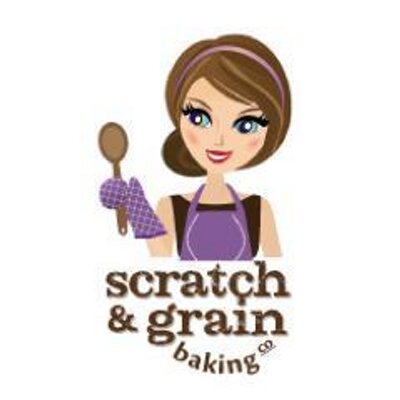 Leah and Taya, two moms from Portland Oregon, have created the Scratch and Grain Baking Company and have come to the Shark Tank to seek a $150,000 investment in exchange for 20% of their business. Taya starts with her dilemma; baking at home is a very flawed procedure, since you always have questionably bad eggs, or a tube of dough that who knows has what in it? Taya can’t even pronounce the ingredients on the labels, and they never taste quite right. While you could spend hours and hours baking from scratch at home, who actually has the time and money for that in 2016? Since there is no good option on the market to make delicious, homemade baked cookies, Taya and Leah have created the first product for Scratch and Grain Baking Company; the cookie kit!

The cookie kits make homemade baking easy and fun; each box is individually packaged, labeled and tracked. Each ingredient has been color-coded, as well, making homemade baking near fool-proof. All you have to supply is the butter and eggs, while the cookie kit will include the rest of the necessary ingredients to get you started baking. Plus, each cookie kit box makes upwards of 9 sheets of cookies! Robert is the first to ask about any samples, and of course, Leah distributes samples as Taya goes on to answer the Sharks’ questions.

Robert then asks for the different flavors of the cookie kits, which Taya starts by saying that there are six different flavors of cookie kits; Classic sugar, snicker doodle, chocolate chip, oatmeal raisin, and three of the six flavors of the cookie kits are actually gluten free. Barbara chimes in that she has received the oatmeal raisin, and she absolutely loves it – she calls it “out of this world.” Robert jokes that he might have to eat five or six more cookies before he can properly make up his mind about investing, and all of the Sharks love the cookies, even Mark. 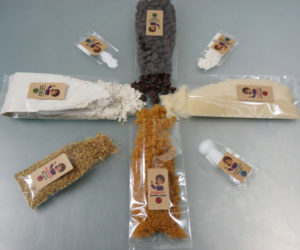 scratLori points out the health behind the cookies, noting that they are using ingredients such as whole flour and flax seed, so the primary market would be a store like Whole Foods which focuses on healthy and nutritional meals and foods. Actually, Taya remarks, Scratch and Grain Baking Company is in about 220 locations, including Whole Foods primarily, but the products are also located in all 120 Sur la Table stores over the United States. The idea came up to Leah when one of her daughters came up and said that she wanted to make cookies, which lead Leah to go to the store and spend $20 on the ingredients, then spent 3 hours measuring, baking, and cleaning. The most frustrating part came from the waste, since Leah obviously didn’t use all of her ingredients, so the idea of a kit came to her mind. The kit means that it’s still an activity and it’s still fun to do, but it’s a much more streamlined and accessible process.

Robert asks the moms about their sales, which Taya reveals have come to $52,000 since the inception 14 months ago. While the sales do seem impressive and are keeping the company afloat, Robert remarks that the sales do seem low, which Leah agrees with and mentions that they had experienced a lot of production problems. When Scratch and Grain Baking Company was started, the two moms were actually the only production; they packaged and labeled each kit by hand, so there is a desperate need to automate the entire process.

Each cookie kit retails for $7 to $12, depending on the store that the cookie kit is purchased. Kevin then asks about the cost to produce each cookie kit, which Taya prefaces with the knowledge that their costs to produce cookies are all-inclusive; overhead, labor, and materials are all included in the cost to produce one kit. Each kit costs $3.89 to produce, which causes all the Sharks to come to reality with Scratch and Grain Baking Company; both Kevin and Robert look exasperated.

However, Taya mentions that the thing she loves most about their business is the ease of scalability. This causes Kevin to press her for more details, giving the scenario of him investing $150,000 and the two moms creating a new model. With the new machines, they should be able to produce up to 50,000 cookie kits weekly, assuming the machines run 5 days a week. These machines should reduce the cost of each cookie kit to $2.15. The product is sold primarily in stores, as Barb asks how much percentage comes from online sales, which Leah reveals to only be a shocking 10%. The cookie kits, Leah points out, cost $5 to ship for a $7 product. Lori concedes that this is a great point, but voices her opinion that cutting down on packaging could greatly affect the margins; mix everything in one bag, and eliminate the redundant packaging. Mark also points out that this would cut down on shipping costs.

Robert is able to read Leah’s face, however, as Leah says that she doesn’t like the idea since it would not be as easy to see what is in your cookies thanks to the separate packaging, and the order in how the cookies are made would actually be affected by selling whole cookie mix; you put some ingredients in, then your egg and butter and stir, then add more ingredients. Kevin points out that in his limited experience with baking, baking does actually have to be done in a proper order. Taya claims that their process of baking cookies sets the flavor far apart from any other cookie that can be bought in stores.

Kevin says he is lost, since the entire premise of investing in the business would be based around getting the contents of a cookie kit down, in price, to $1.70 in order to keep the business afloat. Kevin continues to mull over his thoughts for a second before Mark interrupts and says that his idea of baking is walking into the kitchen, smelling the delicious cookies, and stealing a few then burning his mouth. Despite the fact that Mark cleaned his entire plate of cookies, he has no clue on how to enter or invest into baking businesses, and is the first Shark out.

Barb asks for the background of the two, and Leah starts with herself; she had a bad experience baking with her children, and since she had a go-getter neighbor that she knew wanted to start a business, she fired off a random text message one day to Taya. Taya spent 10 years in the securities-finance industry, and when she had her first child, she was not going to put in 18 hour days for somebody with no long-term payoff; she cared more about her child. At the end of the workday, there needs to be a reward, Taya says, and Kevin replies that Taya is a capitalist and he already loves her. Kevin asks for more information about Taya in the securities industry, and Taya replies that she was a fixed-income trader and traded things like bonds and checking discounts. Kevin immediately readjusts his posture and sits up, interest now piqued in Taya, although she is working longer hours now with less of an income.

Lori says that the first thing that came to her mind was the fact that there are so many other brands in existence which do the same thing as Scratch and Grain Baking Company’s cookie kits. The market is insanely competitive, and Lori is not the primary expert on investing in a baking company, so Lori exits the deal. Robert says that he thinks the two are hustling in the best way, since Taya left an industry that she had little passion in and started to work for herself in an admirable way. Taya then says that she was raised by a single mom who struggled with drug addiction, which gave her the motivation to work out from the situation that her mom put her in. Robert, the best Shark, walks over to pregnant Taya and gives her his handkerchief.

Kevin then says he wishes to make a statement, and says that the reality is that unless the two get the cost down to $1.70, Scratch and Grain Baking Company will eventually go out of business. While there is a way for the two to do that, Kevin just doesn’t know what it is, and exits the deal also. Barb and Robert are the remaining Sharks, and Barb voices her thoughts; when she heard the name “Scratch and Grain,” she assumed scratching, like with nails. The investment of $150,000 is too much and too risky, as well. However, Robert says that in his time in the Shark Tank, he has never lost money and there is indeed a way around that $150,000. The category is just too small for Robert to invest in, and Scratch and Grain would be a better “Barbara-company.”

In the end, Taya and Leah accept Barbara’s offer of a credit line.

Scratch and Grain Baking Company has exploded; I actually just saw these products on my trip to a local grocery store in my home town. Granted, the store was very upscale and sold a lot of expensive yet pointless stuff. Scratch and Grain now sells four-packs of their mixes online at a flat-rate of $9.50 shipping, but with free shipping to the continental United States with an order of $100.

Scratch and Grain Baking Company has evolved from just creating cookie products, too; they now offer additional products like a Cheesecake Brownie Kit, Chocolate Truffle Cookies, Coffee Cake, and even Muffins. Most of the products are sold out, though, so there is a strong question if these products sold out quickly or if they sold poorly and will not be coming back. However, there is a “Beyond the Tank” trial pack; Beyond the Tank is the post-Shark Tank talk show, which Taya and Leah have appeared on to advertise their line of Scratch and Grain Baking Company products