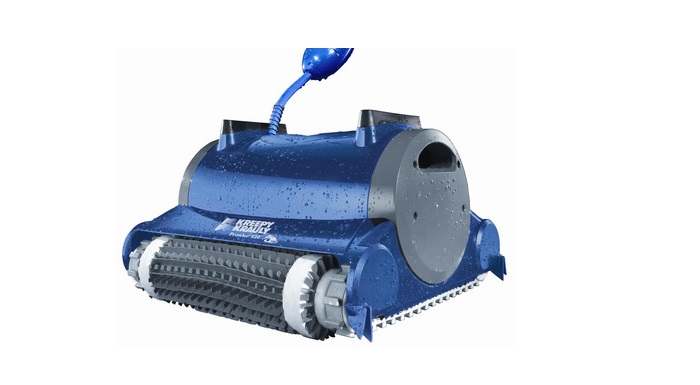 It has recently come to my attention that a fair number of the supposed unique robotic pool cleaners coming from Maytronics have variants. I do not mean three tiers of machine, one of low end, mid end and high end. I mean the same bot with a different name. The Prowler 820 is one such bot. Don’t write it off though. The fact that you can find the same Dolphin under a different name is a good thing, as it means when you go hunting for a bot you can find it all over the place, and get yourself a good price.

The Prowler 820 is a riff on the Dolphin Nautilus, with a few minor cosmetic changes, and a few extra things in the box. In my review of the Nautilus I lauded Maytronics design skills, and the same applies here. This is a wonderful, lightly featured build that does exactly what is required of it and no more. Seen as this is an entry level bot you might fear that it lacks for features, and while it is true there are fewer bells and whistles here than on other more expensive builds, the core Dolphin feature set present here should leave no one cold.

So let’s dive right in, see if this is the right robotic pool cleaner for you.

This is a hardy machine. The Nautilus is too, it comes from being so small. The form factor here lends itself well to durability, and the fit of the shell is flush. The first thing you need to check to be assured of the usual Dolphin standard in build quality is to shake the bot. Sounds silly, sure, but any rattle you hear is an indicator of a build fault. The internal should fit precisely, and seen as the Prowler 820 does not have a handle there should be no noise whatsoever. I have noticed with cheaper builds the parts are not fitted well, and they tend to breakdown fast as a result.

Now to the aesthetics, the core build here is the Dolphin Nautilus, and just like my opinion of that bot, I love it. This is a nice, compact build, broad bottomed with a nice rounded plastic finish. The color scheme here is, if anything, slightly nicer than the Nautilus, which used a lighter blue and black combo. The Prowler 820 and its navy blue finish knock it out of the water for me.

Overall there is a lot to like here. The core build quality is up to Dolphin’s usual standard, and you should now know how to spot manufacturer’s fault’s. The look of the bot should not matter much, but if you find yourself looking at a Prowler 820 that is cheaper than the Nautilus, I say go for the Prowler.

The core Dolphin feature set is all we are looking at today. Been a while since I talked about one of their entry level models, but one of the things you will find with Dolphin’s entry level machines is that all the features included are amazing. A similarly speced machine from another firm would cost nearly twice as much. So, this is an in ground pool cleaning bot with a 60′ cable. The cable uses patented swivel technology to prevent tangling, and if you have owned a robotic pool cleaner in the past you will know that a tangled cable is the number one reason for a cycle stop. With acorns being a close second. Other firms use this cable too, though not on entry level machines.

The dual scrubbing brushes fitted to the bottom of all Dolphin cleaners is both powerful and thorough, making light work of even algae. Not only does this bot clean the pool floor, but it can also make that rare 90 degree transition to the pool wall, climbing right to the top and cleaning well along the way. That feature is also considered a premium by other firms. I find that to be a little odd, as I cannot see the point in a robotic pool cleaner that you have to clean up after.

At 18.75 pounds this is certainly on the lighter end of the robotic pool cleaner spectrum, though the lack of a handle is still worrisome. The cycle time is 2.5 hours, about average for a Dolphin, and there are no other cycle options. We do have a full bag indicator light though, a feature seen more often in Dolphin’s mid range line, and not one that is present with the Nautilus. The built in pump is Dolphin’s usual high powered 4,322 gallon per hour pump, certain to filter your pool to crystal clarity.

Again, a whole lot to like. It’s a Nautilus with a little extra, but it does come with a few downsides. It uses a filter bag system, let’s go into more detail on that now.

Maytronics Dolphin Prowler 820 Ease of Use

There are two kinds of robotic pool cleaner. The all in one unit and the kind that require extensive external set up. I far prefer the all in one kind, as in this day and age it is not necessary to set up and external pump for a robotic pool cleaner. The internal pumps used a robust and powerful enough, so I focus on what I judge to be the better products. The Prowler 820 is one of the easiest models to use on the market. A true plug and play device. You plug it in, set the cycle and dunk it in the pool. That is it at its core.

I do take issue with a few design choices though. The biggest is the lack of a handle. Getting an 18.75 pound machine out a pool with a handle is hard enough, and it’s absence here is felt. The other issue with the build is the bottom loading filter bag system. That is two issues though. the first is the use of a filter bag, when cartridges have fewer issues, and the second is that the bag change chamber is on the bottom of the machine, necessitating a bot flip every time you want to change the bag.

Not major issues for sure, but when the build is this good you need to nit pick. If you can get over those problems then this becomes a contender as we head into the price section.

Now we have the deciding round. I find that the vast majority of the time people are looking for the price, and around half the time I have bad news down here. Not this time though, the price range for the Prowler 820 is between $550 and $750. For all the features present here that is a bargain. Now I usually talk about how a robotic pool cleaner saves you time, a lot of time in most cases, and thus pays for itself based on how you value an hour, with them paying you back within a year, but with this bot you will have made back you money in free time within six months. Hell of a bargain.

Now the other cost that has to be considered. The price per cycle. With the Aquabot range of robotic pool cleaners I was able to do a fairly accurate estimate, as they released the full power consumption information. Seen as Maytronics have not done so for the Dolphin range I have to make a far less accurate estimate. you will have to look to your local price per kilowatt hour, as it does change from place to place. I would say the cost per cycle here is about 10c, plus of minus 5c. Not a huge sum, true, but one that will add up, so please take it into account when buying your new bot.

Onto the warranty. Now I review products for a living, so i spend a fair amount of my time reading through warranties. I have learned to spot the good kind, like the one offered by Ridge Industries LED light bars, and the bad kinds, like the Limited warranty Aquabot tack onto the end of their full coverage warranty. I will not be able to give a full opinion on the 24 month bumper to bumper warranty offered by Maytronics on the Prowler 820. they haven’t released the information to me, though I have emailed them about it and expect to hear back from them soon. This review will be updated as soon as they get back to me.

Well color me surprised, an entry level bot, with mid range features at a ludicrously low price. If this little bot does everything you want it to, and to be honest it does, then I do not hesitate to recommend this build. Be sure to compare the price of the Nautilus when looking for a Prowler and buy the cheaper of the two.