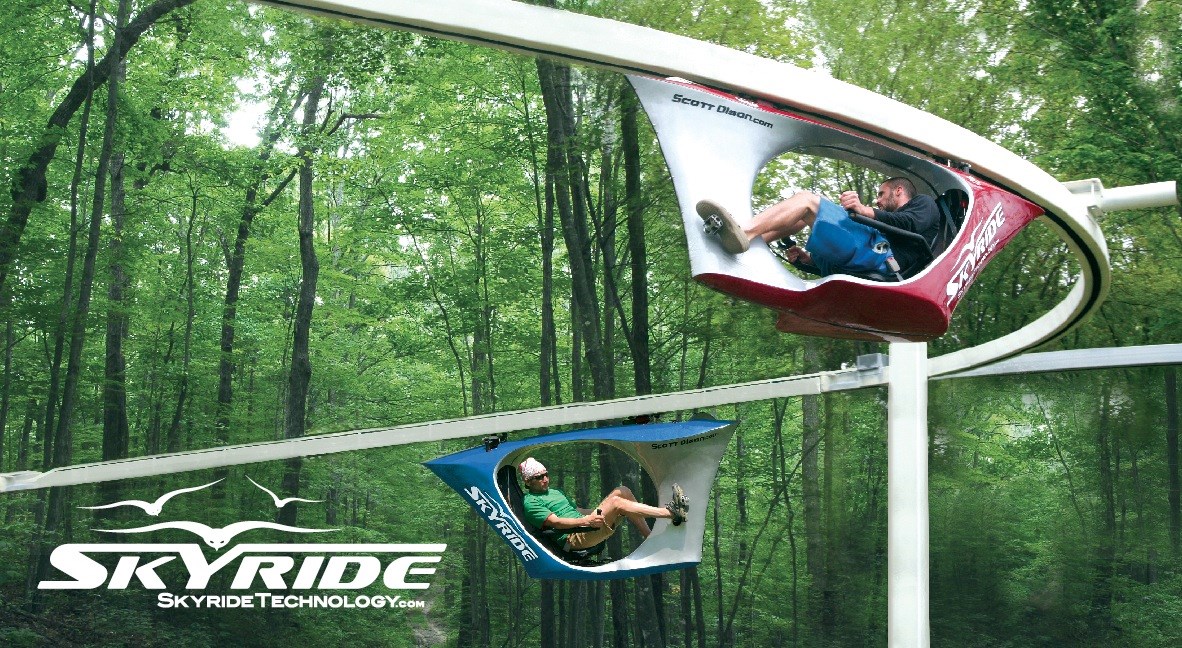 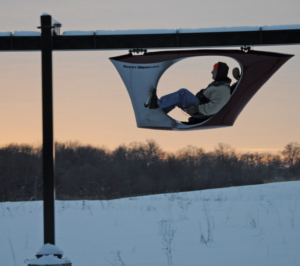 Skyride is a human-powered monorail system that was first conceived by Scott Olson, the same man who created Rollerblades. Olson came up with the idea for this new product almost twenty years ago, wanting to create an entertaining and easy way for people to exercise as they would on a bicycle, without having to worry about the hazards of actually cycling on a road or in the mountains. (He, almost literally, looked to reinvent the wheel.) The Skyride is essentially a vehicle of sorts that is suspended on a rail. A person sits inside of the vehicle and, depending upon which specific type of machine is being used, will power the vehicle along the rail. There are several products in their line that allow for vehicles that simulate rowing, cycling, and gliding. The intention was for Skyride to have a place in fitness, recreation, as well as transportation. They were also meant to be highly accessible machines, with a form factor and design that would allow for individuals with physical handicaps to still enjoy the high-speed experience. Scott Olson has revolutionized the world already with his invention of the rollerblade, and he hoped to do the exact same thing with Skyride. 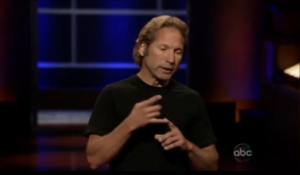 When Scott Olson first entered the tank with his product, he was met with a lot of reluctance from the sharks, who thought that his valuation ($15 million) was ridiculous coming from a company that still didn’t even have any sales. He was asking for a $3 million investment for 20% of the company which, while not unprecedented, was a fairly large ask. Upon hearing this, Kevin very eloquently asked Scott, “Are you nuts?” For most people, asking for an investment like this without any sales would’ve been an instant game over. However, Scott had something up his sleeve. He bragged about his “claim to fame” as the inventor of the rollerblade, which ultimately kept the sharks interested. (Mark teased him for not revealing how much he had made off of the venture.)

Scott went on to express his vision for Skyride: Skyclubs around the world where people can pay a flat fee to use a Skyride around a sky track. He essentially wanted his invention to become the next treadmill or elliptical. Even still, the sharks, Kevin in particular, were concerned that the product would not sell well to individual consumers. (Scott respectfully disagreed, saying that he had a set-up in his own backyard, which he called a ‘yard gym’.) Robert felt that his ambition in this particular venture may not have been well-founded. Each system required a lot of set-up and construction, and families would have to fill their entire backyards to become what Daymond called, “a gerbil on a wheel”. 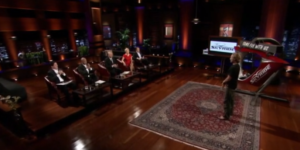 Barbara was the first shark to drop out of a potential deal, saying that she didn’t have confidence in the company ever taking off to begin with. Regardless of Scott’s prior experience with inventing and entrepreneurship, she just didn’t think that Skyride was anything special. Daymond dropped out shortly after Barbara with similar reasoning, stating that although the tech was cool and interesting, he didn’t really see it becoming as big as something like rollerblades, since the Skyride was significantly less accessible. Kevin briefly interrupted his negotiations with the other sharks, saying that he got the sense that Scott was more of an inventor than he was a businessman. This underhanded jab agitated Scott a little bit, and he argued that he had successfully marketed and monetized the rollerblade before, bringing it up from nothing.

Mark Cuban, like Daymond, thought that the product was really cool, and said that he would personally love to have a Skyride machine in his backyard. Still, he said that he didn’t feel like he had enough to bring to the company, citing his inexperience in construction management. He didn’t want to drag Scott’s pride and joy down with his own incompetence. Robert was next to drop out, saying that although he liked the product, he didn’t see it becoming anything more than something that could be sold to ski resorts or theme parks. He didn’t think that the average consumer would want to buy something like this. Scott clarified that, although he was very much interested in selling the product direct to consumers, he was also interested in selling the technology to ski resorts and things like that. (He seemed to be jumping back and forth between how the product would be sold, and who exactly it would be marketed to, which was not comforting to any of the sharks.) 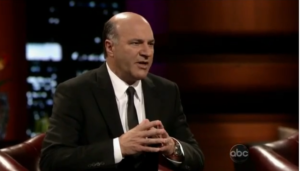 With that, Kevin was the last shark available. Never being one to mince words, he absolutely trashed the product. Kevin said that he respected Scott as an inventor. He compared himself to Scott, saying that although he was a good businessman, he would occasionally make terrible investments. The primary difference between himself and Scott, he said, was that he was personally capable of recognizing when he had made a terrible decision. Kevin chastised Scott for having had pursued a business that he thought was a “bad, bad idea”. He dropped out of a potential deal without letting Scott put in another word. With that last out, Scott left Shark Tank without having fielded a single offer. However, a few of the sharks encouraged him to continue pursuing a better future for Skyride.

Skyride Now in 2018 – The After Shark Tank Update 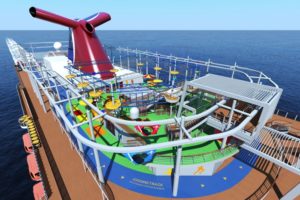 Even though Scott Olson wasn’t able to get an investment on the show, his company is still doing really well for itself. Its greatest success at the moment? Skyride has recently struck a deal with Carnival, placing a Skyride atop the company’s new Vista ships. The Carnival Vista Skyride will be located on the sports deck of the ship, allowing passengers to ride around on the track and get in some safe exercise while also taking in some of the ocean views. Scott Olson is also continuing to work to establish a few Skyclubs, physical locations around the world housing multiple Skyride units, allowing people to come and pay a fee to use the machines for fitness purposes. The company has also seen significant media attention since their appearance on the Shark Tank, with many viewers feeling as though Scott and his product were too harshly judged by the sharks. Based on this update, though, I think it’s safe to say that Mr. Olson didn’t really need any outside help to get his invention to take off.