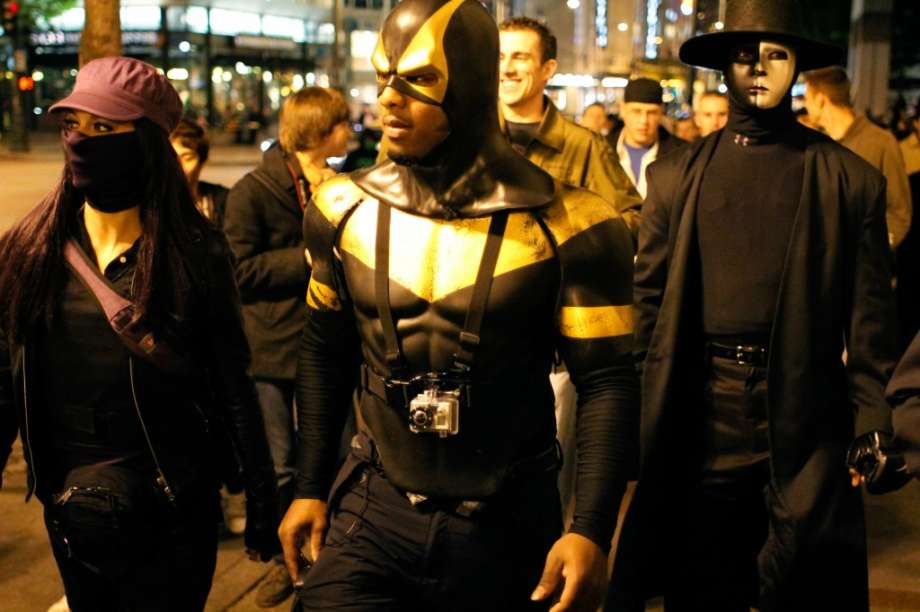 No, this isn’t a cheesy article about brave people that you would find on Oprah. Just wanted to clarify that before we get started. While single mothers, brave workers and people who sacrificed themselves may be deemed as heroes, they’re not what’s on the menu today. Today, we’re talking about people who wear masks and costumes to protect their community, in real life.

In case you didn’t know, there is an official term for this phenomenon – RLSH (Real Life Super Heroes). And they’ve existed since the 90s. These people conceal their identities and use that to their advantage, like Batman or Superman. While they may not have awesome detective skills or superpowers, they are the closest thing we have to comic-book characters. Let us introduce you to top 10 real life super heroes, in no particular order. 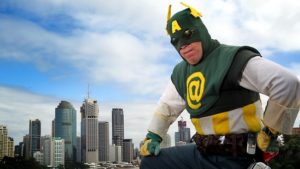 Americans may have a fictional captain with out-of-this-world martial art skills and an unbreakable shield, but he’s just that – fictional. Aussies on the other hand have a real life captain who proudly named himself after his country. Captain Australia, whose true identity still isn’t known, roams the streets of Brisbane at night, looking for crimes to prevent. Armed with a utility belt containing a torch, a mobile phone and a video camera, Captain is ready for all Brisbane felons. He claims that he once saved a woman from being sexually assaulted by two thugs. He also stated that superhero life isn’t very glamorous as TV portraits it. Brisbane police officers stated that they would prefer that he leaves the job to professionals, but he doesn’t want to give up just that easy.

A 41 year old man in Argentina decided to get a blue costume and mask, put a shiled in his hand and patrol the streets of Lanus Este. Armed with a stick, flashlights and his Argentina-flag shield, Menganno calls himself “the link between people and the police”. He is one of the most popular real life super heroes. He has couple thousand followers on Facebook where he posts useful tips hoping to make this world a bit better. His true identity is known only to people closest to him. 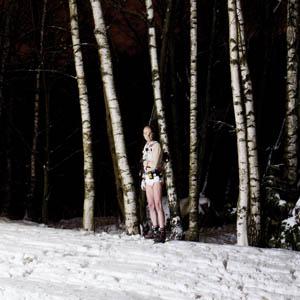 Inspired by a short-lived comic book super hero, Skateman, a man decided to dress up and patrol the streets of Helsinki. Like his idol, he wears roller skates. Unlike his idol, he doesn’t fight using them. How cool would that be, though? Anyways, Dex Laserskater specializes in helping tourists by guiding them, tipping waiters and performers, as well as aid the police in solving crimes. If you’re ever planning to visit Helsinki, Finland, keep an open eye and you may spot him! 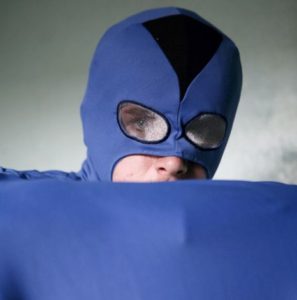 In 2010, an 18-year old decided to put on a suit and become the local super hero in Salford, Greater Manchester. Armed only by his hope for a better world, Roger Hayhurst, known as “Knight Warrior”, does his best to break up any fights that are happening in his neighborhood. His approach is to try to calm everyone down, and if it fails he backs off and calls the cops. Knight Warrior used to patrol 3 nights a week and do his best to break up all the fights he came across. It isn’t known if he is still active, but you can always go to Salford and see for yourself.

Three sightings of a mysterious incognito hero were reported in South London. A vigilante in combat trousers  wearing a bandanna managed to save an innocent man from being robbed by knife-wielding thugs. Other people who saw him believe that he is a martial arts expert because of his professional fighting style and abilities. Whatever the case, the Bromley Batman was saw only three times so no one knows what happened to him. Police didn’t officially get any reports of a masked vigilante roaming the streets. 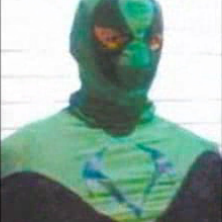 In 2010, Columbian police stopped a man who was looking suspicious, least to say. He was wearing a green-black super hero costume, two plastic sticks, ninja throwing stars and called himself “The Viper”.  In his utility belt, he had a screw driver, some wrenches and a phone to quickly call the cops if he needed to report anything. Since it’s illegal to wear masks in Columbia, Tennesse, the man was stopped and issued a warning by the policemen. The Viper’s goal is to find and report crimes without interfering with them. He got his 15 minutes of fame in 2010, and hasn’t been heard of since.

Our first and last female real life super hero comes from New York. Wearing a red costume matched with a leotard pattern, Terrifica patrols the nightclubs of NYC and prevents women from making bad decisions. She stated that she believes that drunk women need be protected from themselves, and that’s where she steps in. Armed with a pepper spray, phone, lipstick, camera, notepad and a some candies, she steps into clubs at the darkest hours to help women who could be used while drunk. She did get in some troubling situations, but her strongest weapon is her sobriety, according to her. Terrifica has been active for many years, doing her job diligently.

Ken Andre (33) puts on his ninja costume and patrols the streets of Yeovil frequently, as he has been doing for many years. His alter-ego, Shadow, is a ninja who sneaks around and makes sure that the streets are safe for the good locals of Yeovil. If there is trouble, he doesn’t fear to step in because he’s a trainer security guard, but he also won’t hesitate to ring the police. Fun fact about him is that he does have a ninja samurai sheath, but he only has a foam stick in it. Bummer. Ken states that he enjoys both being a ninja and doing good, so he combined the two into Shadow. 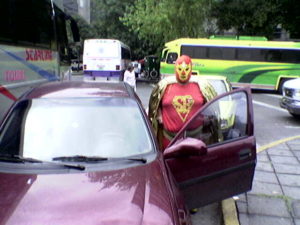 Mexican superhero who organizes rallies and protests goes by the name of Superbarrio Gomez. Unlike other super heroes, he doesn’t fight violence and corruption. He prefers putting on a wrestling mask and file petitions, as well as organize protests. Superbarrio is one of the best known super heroes in the world. He appeared in many documentaries and has two books written about him. He has also appeared in certain comic-books. In 1996, he self-proclaimed himself a candidate for the Presidential Election, and held campaigns to get people behind his cause. Sadly, he never got to see the presidential chair. His identity became known after many years, when it was published that Superbarrio’s real name is Marco Rascón Córdova. 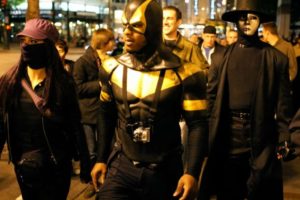 Benjamin Fodor, better known as Phoenix Jones is probably the closest thing we have to a real super hero. He is a trained MMA fighter who wears a bullet proof vest and doesn’t hesitate when it comes to stopping crimes. His origin story is also alike some comic book superhero’s story. His car was broken into, and not a single bystander attempted to stop it. Fodor then put on a suit and decided that he won’t be the passive watcher of crimes. He’s been stabbed and shot at, but he isn’t planning to stop his cause.

Thanathos is the name that a Vancouver man chose as his super hero alias. Wearing a black coat and hat with a green mask, Thantos helps people on the streets of Vancouver by donating food and clothing.

Dark Guardian is a Manhattan-based criminal fighter who targets drug dealers. He is known for sneaking up on them and shouting “This is a drug free park!” while beaming a flashlight straight into their faces.

Wheel Clamp Man has set himself a simple cause; wear a costume and remove the wheel clamps off the illegally parked cars. Perth locals are thankful to him for helping them avoid a hefty fine for their not-so-properly parked vehicles.