Top 10 Most Valuable and Expensive Autographs 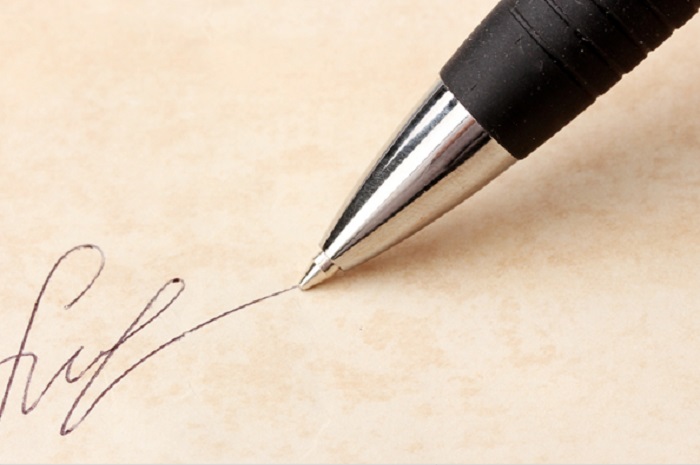 When John Hancock signed the Declaration of Independence in 1776 he made sure that his signature stood out amongst the other names. His signature was flamboyant, stylish and larger than all the others, and from that day forth his name became known as a synonym for the simple act of signing your name. Autographs are treasured items amongst collectors and fans of celebrities alike, the possession of an item that has been signed by a personal idol is a never ending quest for some fans, and most of the time the celebrity in question will supply their signature willingly, without charge. Over time, depending on the popularity, or infamy, of the person that has marked their name, that treasured and personally signed item can become extremely valuable, but what have been the ten most valuable signed items in history? Read on to find out. 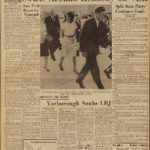 November 22nd 1963 was over half a century ago, but few who were old enough to read a newspaper, or listen to news broadcasts on the day will ever forget it. The place was Dealey Plaza, in Dallas, Texas, and the event was the assassination of the thirty fifth president of the United States, John F. Kennedy. Just a few hours before Lee Harvey Oswald unleashed a sudden hail of bullets at the ill-fated leader, Kennedy had signed a copy of that days ‘Dallas Morning News’ for a young local woman. The autograph was the last that Kennedy ever wrote, and the poignant memento signed on the date of his death became much sought after. The paper was sold to Joseph Maddalena, the star of ‘Hollywood Treasure’ and owner of ‘Profiles in History’ for $39,000. Maddalena later admitted he would have paid considerably more for the item and considered the price-tag to be a bargain, he insured the paper for half a million dollars soon after buying it. 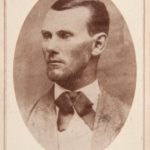 It’s no surprise that the signature of a great leader like Kennedy reached such a great price, but the value of autographs extends just as well to those who haven’t contributed so positively to civilization. Jesse James is one of the most infamous, and enigmatic bank robbers of the old wild west, considered by some to be a 19th century Robin Hood due to his occasional habit of robbing from the rich to give to the poor, and a signed photograph of him was sure to reach a high price when it came up for auction in 2011. Only one other example of his signature is believed to exist, in a letter written by James in 1875, but the authenticity of the signature on that letter was in some doubt. The signed photograph of Jesse was inherited by his granddaughter, Ethel Rose James, and its provenance was beyond doubt. The photograph had a reserve price of $20,000 but such a rare item created a minor bidding war, and it was eventually sold for $52,000. 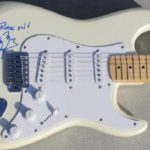 Led Zeppelin is considered by many to be one of the most influential bands of the sixties and seventies. Guitarist and co-founder of the group, Jimmy Page has earned his place as one of the seminal rock guitarists of the era, and the man behind the fretboard has never been averse to signing guitars for fans when he is asked. But the problem with most of the guitars allegedly signed by Jimmy is that they have a complete lack of authentication, and it’s not too hard to copy the rock Gods signature, even if you couldn’t compete with him in a riff. There are a number of guitars marked with Jimmy’s customary ‘Rock on’ in circulation, and those with a degree of supporting evidence often reach from $1,000 to $5,000 in auctions, but when a rare Gibson model appeared with a provenance beyond doubt, it soon came to the attention of fanatical Zeppelin fans everywhere. The guitar sold at auction for $73,000, but of course the buyer got a guitar played by Jimmy Page free with the purchase, and perhaps a bit of the great mans magic will rub off on them. 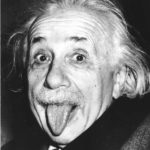 Albert Einstein was a brilliant man, that much is beyond doubt, but the father of modern physics had a mischievous side to him as well, and that sense of fun created the most iconic portrait of him on the occasion of his 72nd birthday. United Press International photographer Arthur Sasse requested that Einstein smile for the camera at the celebrations, held at Princeton University in March 1951. Einstein was known to largely avoid alcohol, so we can deduce that it was just playfulness that made him respond to the request by sticking his tongue out at Sasse, just as the photo was taken. Einstein, like the rest of the World, loved the resulting image and requested that Arthur Sasse send him several copies. Albert signed one or two and passed them on to friends and colleagues and in the years following his death, in 1955, several copies of the photograph alleged to be signed by the great man himself surfaced, but none were found to be genuine. In 2009 the original photo, signed by Einstein, and confirmed as real by experts and Einstein’s surviving family members sold at auction for $75,000. 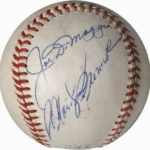 With all those signed items selling for thousands of dollars there has to be a way to make signed items even more valuable, and the obvious solution is if something is signed by not one, but two celebrities. If you consider that those two stars happen to be New York Yankees legend ‘Joltin’ Joe DiMaggio, and his then wife, the most iconic sex symbol of all time, Marilyn Monroe, then you can begin to see the dollar signs flashing. Joe had sold a ball signed by both him and Marilyn shortly before his death in 1999 for $50,000, but Marilyn had signed that ball with her real name ‘Norma Jean’. In 2006 a ball was sold at auction by a New York photographer and it was signed by Joe and ‘Marilyn Monroe’. Marilyn and Joe had signed the ball during a 1961 Yankees’ spring training session in Florida, and it was the only known item containing Joe and ‘Marilyns’ signature together. It was sold to an anonymous East coast collector for just over $191,000. 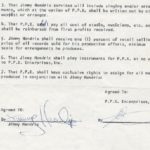 Of all the celebrated musicians that emerged from the free-living hedonistic party of the sixties, there was one that stands alone as the greatest of them all. Jimi Hendrix is widely considered as the best guitarist of modern times, even today almost fifty years after his untimely and sudden death in 1970, at the age of just 27. His influence and appeal have grown, rather than diminished, for far longer than his own personal lifetime, and his first contract, signed by the man himself, came up for auction in 2009. The contract reached the impressive sum of $200,000 when the bidding had finished, which adds an air of poignancy to the sale, for the contract outlines a terrible deal for Jimi, who signed away his rights for just 1% royalties on the contract, which was signed in October 1965. Tragically Jimi never lived long enough to enjoy the incredible riches his talents have earned since. 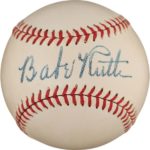 One name stands out in the annuls of Baseball history as the greatest player of them all. I can only be talking about the legendary Babe Ruth, or the ‘Sultan of Swat’ as he was known to crowds of adoring fans. His career began in 1914 and continued for an incredible 22 seasons, until 1935. The number of balls signed by Babe can only be guessed at after such a long period in the public eye. One of them sold for over $250,000 in February 2014, but even that was not the most expensive ball signed by Babe Ruth. In 2012 a pristine condition ball, never used, and immaculately clean and white, sold for a record-breaking $388,375 to an anonymous collector. It remains today in 2016 the most valuable baseball ever sold. 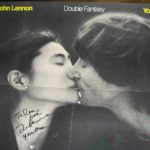 On December 8th 1980 John Lennon and Yoko Ono left the Dakota building, their permanent residence in New York City, for the Record Plant studio where recording for their new album was taking place. John, co-writer for and member of The Beatles, arguably the most successful and influential group of all time, was approached by a fan who requested he sign the cover of his ‘Double Fantasy’ LP, released just weeks earlier. The fan, Mark David Chapman, thanked Lennon as John scribbled a quick greeting on the cover of the record, and the celebrity couple sped off in a limo for their appointment. Five hours later the pair returned to the Dakota building, and as they entered several shots rang out. The doorman of the building later testified that Chapman had called out ‘Hey John’ before firing five shots directly at John’s back from just a few feet away. Lennon succumbed to his injuries in hospital within the hour, as Chapman sat calmly, reading JD Salinger’s ‘Catcher in the Rye’ and waiting for the police to arrive. The signed album cover was sold for $525,000 in 2003, but would be likely to fetch considerably more at auction today. 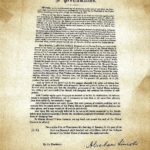 Just one year before his shocking assassination, at the hands of John Wilkes Booth in Ford’s Theatre, Abraham Lincoln signed 48 copies of the Emancipation Proclamation, the act that ended slavery in the United States, and the one for which he will always be most remembered. Twenty six copies of the signed document are known to have survived to this day, and many of them are on display in museums and academic institutions, with a few in private hands. Several copies have been sold in recent years, including one for $750,000 in 1991 and another in 2012 that was sold for $2 million to billionaire David Rubenstein. One of the privately owned copies surfaced in 2010, it had been owned previously by Bobby Kennedy and was in excellent condition. It was sold to an anonymous collector for a staggering $3.7 million, the highest price ever paid for a single autograph at the time. 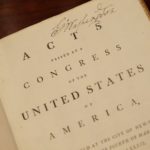 In terms of historical significance and rarity, there can be few other documents that could attain such an incredible value. President George Washington’s personal leather-bound copy of The Constitution, Bill of Rights and the First Congress came up for auction at the renown auction house Sotheby’s in 2012. The book was signed by President Washington on the first page and was truly unique. Ann Bookout, board member of the Vernon Ladies Association, a non-profit organization that operates Washington’s Virginia Estate, made sure that the auction was just a formality, ending the bidding after just five minutes with an incredible bid of $9.8 million, a new record for a Presidential historical document. The Vernon Ladies Association returned the book to its rightful location after paying the huge sum, the Washington Presidential Library, located at the White House.