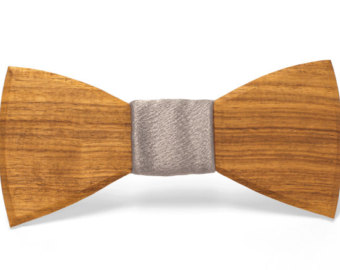 Two guys have just stepped into the Shark Tank, looking rather dapper at that. They are Adam Teague and Tim Passly, and they represent Two Guys Bow Tie Company from Tulsa, Oklahoma. The two of them are seeking an investment of $150,000 in exchange for a 10% equity stake in their company. Adam starts; not everyone has been blessed with Mr. Wonderful’s sense of fashion and everlasting charismatic charm. “Us mere mortals” need help with looking fine, and we rely on our clothes to stand out. We have all been there – when you are at a wedding, trying to get one of the bridesmaids to dance with you, or at least notice you. The problem is, you look just like everybody else in the same old suit and tie.

Fortunately, this is where the Two Guys Bow Tie company comes in to help you stand out from the crowd. With one of their wooden bow ties, you will make an extreme statement about who you are. Unfortunately, the two of them will not be able to help you with the electric slide or other dance moves, but they can at least get you noticed. The handcrafted accessories from the Two Guys Bow Tie company will make a statement about you at the office Christmas party, on your next date, or out on the town. The bow ties are made using old school craftsmanship and are made from a variety of materials such as walnut or African zebra wood.

Two Guys Bow Tie Company does not just specialize in bow ties, but also in ways to spice up your lapel, your pocket, and now, the new take on the traditional fedora. Any of the pieces from the company are made with age in mind, and actually wear out quite nicely over time. With the help of the Sharks, the two of them are sure to make money – but knock on wood. Of course, the two of them distribute samples out to each Shark. Mark jokes about Tim, “finally, a man who gets it right and starts from this end!”

Each Shark is given a black fedora, except for Mark – they joke that Mark’s head is really big, not just his ego. Guest Shark Troy Carter, founder of Atom Music and manager of Lady Gaga, slides on the wooden fedora and I must say, I myself am quite jealous despite the stigma of fedoras being uncool. Lori points out that the bowtie is actually engraved with the skyline of Chicago, which is insanely creative. Troy then asks where the fedora is being sold, and Tim explains that the products are actually not being sold yet.

They are just getting ready to launch and going into a market in Atlanta. Kevin guesses that the first, and main, product was the wooden bow tie, which the two guys confirm. The wooden bow tie retails from $45 to $95, and each one costs around $7.50 to make. The wooden bow ties are sold in various markets, but the most prominent one is their ecommerce store. They love this the most as they get to keep a majority of the money. 75% of the sales come in from online. 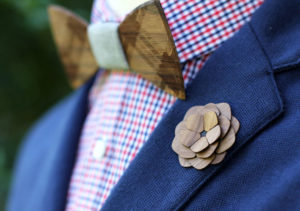 Daymond then asks how many sales the company did last year, and Adam says they did $407,000 in the last year. After being in business for two-and-a-half years, they have sold just short of $1 million of products, which blows away Lori. Adam continues on, saying that they do customization really well – they can do almost any sort of customization on the tie. They actually ship out the customized orders the following day due to the process, and they can create about 1,000 bow ties a week. They have sold over 25,000 pieces and have had less than 30 returned for defect.

Troy Carter then asks how they are advertising the bow ties, and Tim explains that their goal is to get the bow ties on “pacemakers” and trendsetters. They have worked really hard to partner with people, and Tim is a huge NBA fan, so they attempted to partner with Mike Conley Jr, point guard for the Memphis Grizzlies. Mike wore the wooden bow tie during a press conference and got noticed during the NBA playoffs, and as a result, they ended up doing a separate interview for the bow tie. They then shipped out bow ties to various figures, including Shaquille O’Neal and Patrick Barkley.

Troy loves the story and thinks the fedora is fantastic, and thinks that they could maybe make it a little smaller for his tiny head. Daymond is actually completely killing the wooden fedora style, and Troy thinks this is more Daymond’s expertise. Troy immediately bows out to Daymond, deferring to his knowledge in the industry. Of course, Tim reaches behind him and shuffles around for a moment before giving Troy a smaller fedora.

Kevin then poses a question, and tells Daymond he wants his feedback. Kevin has spent a lot of money on weddings and special events and things that include more romantic pursuits, such as his Wicked Good Cupcakes company, and he calls it “Mr. Wonderful’s Platform of Love.” What he tries to do is incentivize all of his other platforms when they have a party or event, so how much would Two Guys Bowtie Company fit into that?

In the Platform of Love, the bowties would fit great into that. People want their weddings to be dialled in, and they actually allow people to mail in their own fabric which they will then make bow ties out of. Kevin says that he likes three times in people’s lives – when they are born, when they marry, and when they die, all because they throw caution to the wind in terms of pricing. So, Kevin is definitely interested in getting the Two Guys Bow Tie company in his Platform of Love, and he will make an offer immediately. 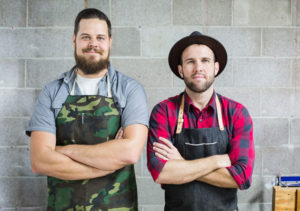 Kevin extends an offer of $150,000 in exchange for 15% of the company, but he finds that he will add a lot of value. Tim cautiously explains that they are interested in entertaining the offer, but they would also love for a Shark to be added with a different skillset. Daymond then steps in and says that the two of them are talking about him and he appreciates the shout out, and he is definitely interested in adding this two his portfolio. Lori asks about Mo’s Bows, a similar company that Daymond invested in but for a much younger counterpart. Daymond loves Mo’s Bows since he is a 12 year old but a vicious, vicious pitbull.

Daymond then explains that he would bring the licensing experience to the table, but that means he will have to work a little bit harder. Daymond then extends an offer of $150,000 in exchange for 20%. Tim then says that they would still like to entertain offers from the other Sharks, and Mark steps up to speak. Mark says that he is not a fashion icon because you cannot make a hat big enough to hold his brains, so Mark is out of the deal quickly. Lori loves the company, but Kevin and Daymond are their best partners in terms of marketing and selling the bow ties. Lori would be a customer but not an investor, so she is out of the deal.

Kevin and Daymond remain in the business, and Adam looks to Daymond and asks about the possibility of a partnership between Daymond and Troy. With Troy’s network and Daymond’s fashion expertise, they would love to work with both men together. Troy looks to Daymond, and Daymond explains that he is not adverse to working with Troy since he can bring a lot of value with his music relations. However, Daymond would need to move up to 30% equity since he would need a fair share of money, but this is still dependent on Troy coming into the deal. Of course, the show dramatically cuts to commercial.

Troy looks to Daymond while he thinks about his best course of action. Troy says that if the two men will go up to 30% for that price, they would make excellent partners. 30% is a little higher than they wanted to go, Adam says, and counter-offers with 20% equity with a royalty of 5% until they make their investment back. Daymond says to raise the royalty to 10%, but Kevin then steps in to make things interesting.

Kevin offers a deal of $150,000 in exchange for 10% equity with a royalty fee of 7.5% until his investment is recovered, and he will put that on his Platform of Love. Troy then exits the deal, and Daymond says that since he has the thirst for the royalty, he will keep it at that. Daymond drops his offer to $150,000 in exchange for 20% equity with the 10% royalty until he receives his investment.

In the end, Adam and Tim end up finding a partner with Daymond for $150,000 in exchange for 17.5% equity with a 10% royalty until he recovers his investment. Daymond also says that he will model the fedora for free, as he had not taken it off since he received it.

While at first I was skeptical about the “hipster-ishness” of the Two Guys Bowtie Company, I cannot help but fall in love with the product; I have my own wooden bow tie being shipped right now. The Two Guys Bowtie Company has expanded their product line to include the showcased bowties on Shark Tank, but now also offer more customization, such as any major city’s skyline being carved into a wooden bowtie.

In addition, the website will pop up with recently-placed orders on the bottom, showing where products are being sent to across the United States – the little bar continuously popped up as I stayed on the page, with the oldest order being placed 3 hours ago. I firmly believe Two Guys Bowtie Company have revolutionized the way that men are going to dress in the future, and as evidenced by the spamming of the recent orders, this company is going nowhere fast. Daymond appears to have made a wise investment, and I cannot help but wonder if he has his own collection of Two Guys wooden bowties to wear out on the town.