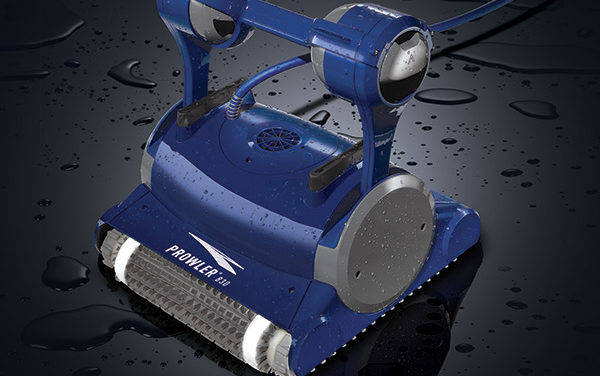 The Prowler 830 is a strangely familiar machine. I looked through the specs, I looked at the design and felt I had seen it before. That is because I had. Twice. Maytronics has been releasing the same bots in a variety of ranges under different names. I believe it is to maintain exclusivity deals with various online and offline retailers, and I love it. It means that when you decide on a bot you can find the same bot in multiple places, making it easier to secure a bargain.

As for where I have seen the Prowler 830, you will find this build is nearly identical to the Dolphin Premier, the Dolphin Triton, the Dolphin DX6, the Dolphin Edge and the Dolphin Thunder 20. If you see one of those, then this review apples to it as well. You may see the Dolphin Prowler 830 under the Pentair brand as well, so bear that in mind. To the build itself, this is a fully featured bot, a hardy design that has stood the test of time. In addition to the wonderful Dolphin core feature set there are a variety of bonus features that make day to day use of this bot a joy.

So let’s break this build down, find out why its so popular.

This is at its core a Dolphin machine, regardless of whose name appears on the front. As such you are guaranteed a high quality build. Seen as this is the same bot as the DX6, I can confirm that the parts here fit flush and there is no rattle. That should be the first thing you check when you take it out of the box by the way. The fit of the build, it should be tight, any excess noise is an error, and thus a sign of a major fault.

On to the look of the bot, and for once I see something I like. Navy blue is a great choice for this design, and out of all the Triton variants this might be my favorite. The rounded finish to the plastic shell is great looking, and a build that looked bad in grey really shines here. The cylinder based propulsion system used here is still the best on the market, and lends to the Prowler 830 a very robust tank like look.

Overall this is a well made device, and the aesthetics are great for a change too. Strange how a color change can alter my opinion on the core design, but it has done so. Granted the look of the build isn’t that important, and if you find a DX6 for cheaper than go for that, but if they end up being similarly priced, this is my pick, either this or the Triton.

All Dolphins come with a core feature set that is the envy of their competition. The Prowler 830 has a few bonus features besides, but let’s get the basics out of the way first. This is an in ground pool cleaner with a 60′ cable. The cable uses patented swivel technology to prevent tangling, and as you know a tangled cable is the number one reason for cycle stoppages, followed by acorns. A number of other firms use swivel cables too, but usually only on their more expensive bots, Dolphin consider it a standard across their full range of products.

On the bottom side we have the scrubbing brushes, and the Prowler 830 has the best Dolphin has to offer here. The extra fine dual power brushes not only clean away the worst your pool has to offer, but if you have a tile bottom pool it will also clean the tile line, not something seen in all models, and a must for those with a tile pool. Not only does this beast thoroughly clean the bottom of the pool, but it can also make that 90 degree transition to the pool wall, climbing the length of it, cleaning as it goes. Why this feature is not standard with other companies I will never understand.

The Prowler 830 is a deceptively light weight machine, weighing in at 18.75 pounds. It comes with a caddy, and the handle on top makes it very easy to use on a day to day basis. The remote control features are great, but fundamentally rudimentary. The lack of a dual drive motor makes it somewhat difficult to steer, but it is still nice to have it as an option. There is also a delayed start function, to allow more sediment to settle when you put it in the pool. Topping it all off is the full bag indicator and the weekly timer function, meaning you can leave this bot in the water for as long as you like, taking it out only when it is full.

Again, a lot to like with this one. I have said in the past that the core Dolphin feature set is enough to warrant a purchase, but when they pull out all the stops for a build the value for money tends to increase fairly quickly. There are a few design choices that I am unhappy with though, and I will be going into detail with them now.

Maytronics Dolphin Prowler 830 Ease of Use

There are really only two kinds of robotic pool cleaner. The kind that I review, and the more difficult to use kind. The more difficult to use kind require extensive set up, external pups and sometimes even external filters, and that is time that could be spent doing literally anything else. There was a niche for them at one point, but the power behind some of these plug and play options is staggering, and we don’t need external pumps no more.

The Prowler 830 is an all in one device. All you have to do is plug it in, drop it in the water and select a cycle from the remote that comes with it. Easy. The fact that you have a remote at all makes it slightly more difficult to sue than the more basic models, but the learning curve is not steep. The real difficulties come with getting it out of the water. 18.75 pounds is not all that heavy, and the handle does its best, but it is still a chore. The other major issue for me is the use of a filter bag system in a bottom loading config.

I really don’t get it. A bottom loading filter bag is always worse than a top loading one. When a top loading system is overloaded it won’t spill as much debris and you don’t have to flip the whole bot over to replace the bag. That an an accidentally folded filter bag can lead to cycle stoppages, something that is much more difficult to achieve with a cartridge system.

Overall this is a remarkably easy to use machine. I have some issues with bottom loading bags,and bags in general, but if you do not then you will have no problems using this build.

Now to the deciding factor, because let’s be honest with ourselves for a second, the price of the item is the most important part. Well I am happy to report that the Prowler 830 falls into the $800 to $1000 category. Getting this fully featured bot for under a grand is great value, but be sure to check up on all the variants to make sure you are getting this for the lower end price, I have seen some of the variants going for a little over $1200. I always say that a robotic pool cleaner is an investment in time. Buying one literally gives you back hours per week to do with as you will, so it will have paid you back within a year, assuming national minimum wage.

The only other cost t consider is the price per cycle. Now Aquabot released the full power consumption information, and as such I was able to provide a more accurate estimate as to the running cost. Maytronics has not given me this info, so I am forced to make an even wilder guess, but I think I’m pretty close. It does depend on the price per kilowatt hour in your area, so be sure to look into what you are paying for electricity. On average a cycle should cost you around 10c, give or take a nickel. Not a tremendous expense, sure, but it does add up, and should always be considered when looking for a robotic pool cleaner.

I love a good warranty. I had a great time explaining why the full coverage warranty from Aquabot was great, while the limited warranty from same was nearly worthless. I would love as well to break down the Dolphin bumper to bumper warranty with the same zeal and vigor, but I cannot. Maytronics still haven’t responded to my inquiries. Traditionally a bumper to bumper warranty covers everything, parts and labor, but without the full warranty in front of me I cannot make a value judgement on it. I will be sure to update this review when I receive the info.

A fine machine for a fine price, always nice to see. The issues with the core design are not so great that I can’t recommend it, and if this is in your price range I have to recommend it. Few other builds in this price range can boast this feature set. Be sure to look up the other clones of the Prowler 830 to make sure you are getting the best deal you can.