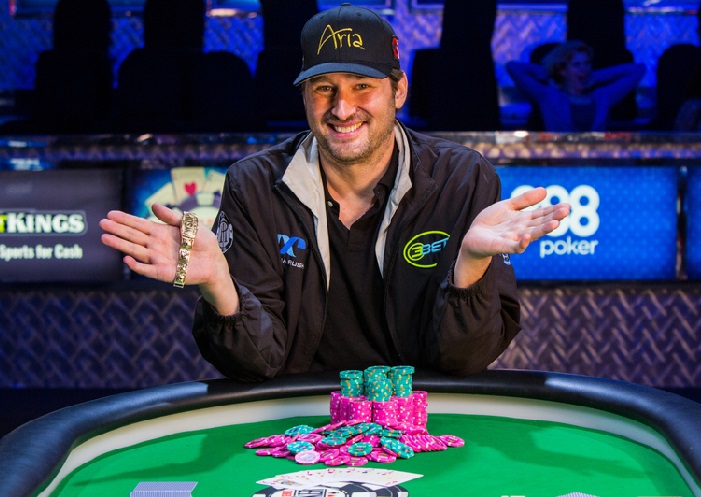 Poker can be a tough game, at times it can seem as if the Gods are smiling on you, and nothing can go wrong, but at others you can feel as if you’re cursed beyond belief. Most poker players learn to take bad luck as it comes, secure in the knowledge that the law of probability will re-address the balance in the fullness of time, and they also know that a cool head is the key to minimising their losses, but Phil Hellmuth, who is without a doubt one of the most successful players of the last thirty years is unique amongst the top players, as he has never been afraid to let his frustration show.

Philip Jerome Hellmuth Jr. was born on July 16 1964 in Madison, Wisconsin. His Father, Phil Sr, was a dean at the University of Wisconsin, and his mom Lynn was a sculptor. Phil began playing cards with his family from a young age, he loved the thrill of winning and had the most exciting games with his grandmother, Agnes. Phil attended the University of Wisconsin and learned to play Texas Hold ‘Em at the student union there. He began playing in local poker games, with great success. After three years he was determined to become a poker player professionally and dropped out of university to follow his dream.

Success evaded Phil at first. He visited Las Vegas more than ten times before he finally came home with more cash than he had left with. During those early days he often had to resort to working as a laborer in farms, in order to build up his next bankroll, but his tenacity eventually paid off, and in 1989 he burst onto the World poker scene in spectacular fashion. That year he reached the final table, in the Main Event of the World Series of Poker (WSOP) the premier poker tournament, and he played heads up against the defending champion, veteran player Johnny Chan for the title. After a tense battle between the two Phil eventually won the game, and in the process became the youngest player to ever win the WSOP main event. The previous youngest winner had been the brilliant Stu Ungar, who had won in 1980 aged just 27. Phil won just over $750,000, along with his first WSOP bracelet, and he quickly became a regular at high-stakes games in Vegas.

In 1992 Phil took his second WSOP bracelet and finished second in another tournament, at that early stage in his career he was far quieter and less combative with his opponents than he became in later years. The following year Hellmuth set another record, by winning three WSOP bracelets in one year, his total winnings from the three events, all Texas Hold ‘Em games, was close to half a million dollars and he became a respected, and feared, opponent on the professional circuit.

As the years went by Phil continued to play at the top level of the game, but gradually the quiet, almost reserved attitude he had displayed in his youth gave way to a far more abrasive personality. Other poker stars have been known for their occasional temperamental outbursts, after all playing a game that involves a large degree of luck will leave every player suffering from an extended losing streak at one time or another, but most of them learn to accept their luck as part of the game, whether that luck is good or bad. Phil Hellmuth alone amongst the top professionals, seethes with anger on a regular basis when fate deals him a bad break.

Phil has become known as ‘The Poker Brat’, and it’s a title he arguably deserves. His inability to move on from a losing hand would be a weakness for many players, but Phil believes passionately that he is right, every single time. When he is winning Phil is all smiles, but when he has a run of bad luck, or encounters a player who doesn’t play in a way that he thinks is appropriate, Hellmuth can explode in anger, and often takes his tirades too far. But Phil’s emotional instability only shows that he is just a regular guy, like the rest of us.

Phil Hellmuth and Tony G’s Rivalry on ‘The Big Game’

Phil Hellmuth is a huge individual. Television makes many people look bigger, but not Phil. His six feet seven inch frame seems far less impressive on a small screen, but his presence at the table, in the middle of a hand, has always been tangible. His television rivalry with Antanas Guoga, or Tony G, as he is known professionally is spellbinding. In one of the most entertaining moments in televised poker, in Pokerstars ‘The Big Game’, Tony G’s ability to effortlessly ruffle Phil’s feathers time and time again was profoundly entertaining, and Phil’s inevitable reaction was amazing to see.

Tony G is magnificent as a poker player, and that night his tactics were masterful, if ethically dubious, but Phil’s utter destruction at the hands of the cocky Ukranian provoked an empathic sympathy for Phil, particularly from poker fans who had felt the bitter drop of a suddenly game-changing river card, we’ve all been there.

Phil is just a regular guy, but his attitude towards other players, and his insistence that he is ‘The greatest player to ever play the game’, as his website so proudly states, is perhaps why he attracts such a large number of followers who just love to hate him, but the statistics do indicate that he is the most successful poker player ever, even if he isn’t the best.

Phil has raised the bar for consistently good play throughout his career. His intuition rivals that of the mind-reader Daniel Negreanu, on a good day, and his emotional state effectively hides a lightning fast analytical brain. He has won 14 World Series of Poker bracelets in his career, the last of them in 2015. Trailing behind him are Doyle Brunson, Johnny Chan and Phil Ivey, all of whom have won ten. Phil’s career winnings in major tournaments are in excess of $20 million dollars, but his regular appearances on high stakes TV Poker shows have considerably boosted his earnings, along with his publishing deal, sponsorship deals, involvement in online poker sites and personalized clothing brand.

The World of poker has changed with ever increasing speed since Phil Hellmuth was a clean cut 24 year old, winning his first WSOP bracelet. Millions of new internet gamblers have produced an avalanche of talent, and the veteran players are feeling the squeeze. Now in 2018, Phil is currently ranked 343rd in the World rankings according to Global Poker Index, a long way down from his fourth place ranking in December 2012, but Phil Hellmuth is a legendary figure in poker, and his past successes speak for themselves.

Phil’s career is a long way from finished. I predict he’ll be playing for many years yet, although probably not for as long as Doyle Brunson has. Now in 2018 he makes plenty of time to give back to those less fortunate. Phil, and his wife Katherine actively support many charities, including Heifer International, The children’s Hospital of Philadelphia, and Ante up for Africa.

Phil, Katherine and their two sons, Philip the third and Nicholas, live in Palo Alto, California, where they have resided since 1992. Despite Phil’s assertions on his website, history records Stu Ungar as the greater poker player of all time, even if he was nowhere near as successful, or as entertaining, as the big man from Madison.