After working in corporate America, Desiree and Arlene decided to jump headfirst into two of their passions – fashion and motorcycles. The pair invented GoGo Gear, a line of fashionable protective gear for motorcycle riders. Would the Sharks take this risky bet? Let’s take a look. 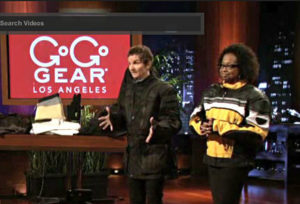 Two people on motorcycles ride down into the Shark Tank, and onto the stage. Robert looked excited. Barbara was shocked when one of them in the Yellow Jacket pulled up her helmet and revealed herself to be a woman. Both of them were.  The two women pulled off their helmets and introduce themselves. They said that they were Desiree Estrada and Arlene Battishil. They asked the Sharks for a $300,000 investment in Gogo Gear in exchange for 15% equity in the company. Desiree explained that below here is a line of protective gear for people who ride scooters and motorcycles. Arlene said that the items were still very fashionable. She told the Sharks that she and Desiree used to ride to work in business suits. Arlene said that no self-respecting person who wears business suits would also wear traditional motorcycle gear, and she gestured down to what she was wearing.

Arlene continued, stating that she and Desiree both lost their corporate jobs in 2008. They had the idea to pull all of their money together and invested in something that they know nothing about. Mark laughed and said that it was the Kevin O’Leary School of Business. Kevin told them that he would give them $300,000 of Daymond’s money right now. Arlene and Desiree unzipped their traditional motorcycle jackets and said that that’s what they were wearing underneath was GoGo Gear. They did a little circle on the stage, to show the Sharks each angle of the fashionable protective gear.  Arlene told the Sharks like each item of clothing was fully abrasion resistant,  and fully armored for wearing when you are riding a motorcycle.See more people walked out onto the stage. They were also wearing Gogo Gear, and it looks like regular work attire. Desiree explains that every jacket that was on the stage also contain protective armor. The armor was located in the back, the shoulders, and the elbow.

Kevin, of course, wanted to know what they’re sales look like. Arlene let him know that they had $172,000 in sales just the last year. Kevin wants to know if they design it as well as outsourced. And Arlene said that they did. She informed him that they were working out of their home, so there is a very low overhead. Kevin want to know what retail stores are carrying the product. Arlene told him that they targeted exclusively motorcycle and scooter stores, and they have them in a total of 25 stores. Barbera wanted to know if either of them had a fashion background. Desiree let her know that well they didn’t have a fashion background, they were very experienced business women who had been in management for 25 years.

Robert right on a sample and Barbara told him that it looked good on him. Mark wanted to know if he could trust them with his money. He wanted to know what they were planning on doing with the investment. Arlene told him that they were going to Europe. Mark asked them if it was on a vacation,  Telling them that that was the wrong answer. Arlene laughed and let him know that while the motorcycle industry was doing ok in the United States, the big market for the product is in Europe. Mark Center in Europe there were thirty-five million registered motorcycle riders. Merge hold them know that was a horrible answer because they were working out of their house and it was only the two of them. He wants to know what happens to the business once they were off and you’re trying to grow it. Mark told them that it was a babysitting process growing a business. He was concerned that they were leaving the country without even hiring their first employee. Desiree told him that was not the case. Arlene said that they had made many contacts overseas, and they did not involve a lot of oversight.

Kevin said that everyone on the stage so that the product was good. He asked them if they would agree to put an ankle bracelet on each of them so that every time they even mention the word Europe they got a 50-volt shock. Robert said that he loved motorcycles, but wanted to ask Daymond’s opinion since he was the clothing guy. Daymond said that they were ignoring the bigger issue of the insane valuation. Daymond asks them if they’d eaten anything before midnight last night because they were about to do some surgery.  He wants to know why the value of the company was 2 million dollars when they didn’t have anything proprietary. Desiree said that their value should be more than just a conventional valuation model.

Kevin so that you can help them with this. He reminded them that they were both business woman.  He told them that in their interest rate, both companies were valued at five times their free cash flow. Kevin told them that they had made a big two tactical error by telling him that their valuation was 2 million dollars. He told them he forced his hand into doing something he didn’t want to do. He said he initially like the product, but he went out due to their valuation. Desiree stated that they had never thought that it would be worth 2 million dollars. Kevin ask them why they told him that it was. Desiree tried to say that she didn’t, but the Sharks pointed out that that was the valuation equals. Desiree said that they were calculating the value based on the equity. Robert said that he wasn’t the one calculating it like that, but that was just basic accounting math. Mark ask them where they were managing, that they didn’t know that.

Barbara said that it was a common mistake, and told the two women not to be put off by the other Sharks fancy talk. Robert asked what fancy talk and told them again that their valuation was insane. Barbara said that she agreed with the complaints about the evaluation. That’s why I asked her how she would value the company. Robert said that it was bad that she had come in there and agreed that the valuation of the business was too high. He told her that she was standing there asking for money, and he wanted to know what she thought their business was worth. Before she could answer, Mark interjected, and told Robert that they thought they were the business is worth nothing. He believed that the two women wanted the Sharks to do all the work. There is chaos for a minute as everyone talked over each other, but then Daymond pointed out that Robert was giving them a chance to redeem themselves.

Arlene said that they needed some help. Daymond said that the Sharks are dropping out quick, and they better come up with a valuation and hurry. Arlene didn’t get the point, and one on a diatribe about how they create something new that no one has ever thought of before. Arlene said 25% equity, but her partner Desiree stated that that wasn’t nearly enough. Desiree said the final number would be 38%. Mark said that she came to that decision the same way she came to every other decision, by pulling it out of the air. Desiree stated that they had talked about it before they left for the show. Mark said that they took $400,000 and Haven’t been able to define the direct strategy over the last two years I would get them to be profitable. He quoted Kevin and said that any brand could just sleep in and crush them like the Cockroaches that they are. He went out. Mark said that he was so out, he was in Europe looking back at them.

Barbara was the next to go out, sighting the fact that they pissed away all that money, and also because of their extreme optimism. Arlene insisted that their product was Innovative, and she didn’t want to leave the Shark Tank without a deal. Robert explains that when they had a product that was Innovative, but could be ripped off easily, They need to have laser-like Focus. He said that the biggest fear with them is that they are not focused, and he said that that was the reason he was out.

Daymond was the only one left. Desiree stated that they were willing to bring their Equity offer up from 38%. Desiree and Arlene stepped out for a moment. Robert informs them but the two entrepreneurs horsepower the brand. Barbara, a statement of his concern, was that someone was going to knock it off, but he said it wasn’t. He said that his largest concern was that he didn’t know anything about getting motorcycle accounts so that he would leave it up to them. He said that was the challenge. Robert said that he knew the motorcycle Market, but did not know the fashion side. Daymond stated that he could do the manufacturing. Robert didn’t want to go in without Daymond.

Robert said that he couldn’t do it. Desiree pleaded with him, saying that they were willing to refocus, and write up a marketing plan. Daymond told them that Robert was out, but he was still in. Daymond hugged them and begged them not to make him look bad.

Gogo Gear Now in 2018 – The After Shark Tank Update 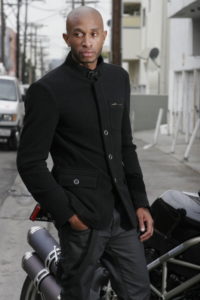 It looks like GoGo Gear is alive and well a few years after their Shark Tank episode. Their high-stakes deal with Daymond never went through. After the recession, they lost many retailers due to massive industry losses. In 2015, GoGo Gear revitalized their website, and eventually went into their highly sought-after market – Europe. According to an interview with Arlene, they increased their business times 10 – all while getting to hold on to the 65% equity stake. You can purchase Kevlar leggings and other cute clothes on their website.