What Happened to Robyn – The Singer Now in 2018 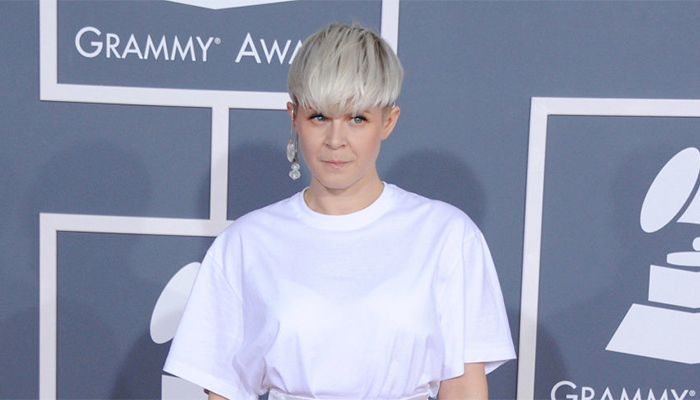 A celebrated singer-songwriter, Robyn has released a handful of critically acclaimed albums throughout the 90’s and 2000’s. Born into a family of performers, Robyn travelled with her parent’s traveling theatre group during her childhood. Having grown font of music ever since she was a young child, she eventually wrote her very first song at the age of eleven following her parents’ divorce. Pursuing her dream of becoming a music artist, Robyn eventually released her first studio album entitled, Robyn is Here in 1995; it would later spawn two successful singles, Show Me Love and Do You Know (What It Takes). Since then, she has gone on to release a number of albums over the years, including My Truth (1999), Don’t Stop the Music (2002), Robyn (2005), amongst others. In 2010, Robyn also released a mini-series of albums entitled, Body Talk Pt. 1 and Body Talk Pt. 2ーwhich would later spawned three top ten singles, Indestructible, Hang with Me and Dancing on My Own.

Recognized as a vocal talent in her home country of Sweden throughout the late 90’s and early 2000’s, Robyn eventually rose to fame in the United States with her fourth album, Robyn. As one of her best albums to date, the record would effectively propel the singer into celebrity status in North America. A decorated artist, Robyn has also won a number of awards throughout her singing career including eleven Swedish Grammy Awards, and three P3 Guld Music Awards. In addition, she has also received numerous award nominations including five for the Grammy Award, two for the World Music Award, six for the Swedish Grammy Award, one for the BRIT Award, amongst several others.

Besides her work with music, Robyn has also made a handful of appearances on televisionーher first being that of a voice-over role in the 1989 animated cartoon, The Journey to Melonia. Since then, she has lent her voice to the children’s stop motion series, Action League Now (2003) and has starred in the Swedish TV documentary, Ingen riktig våldtäkt (2012). More recently in the 2010’s, Robyn has also guest starred in a number of popular television talk-shows including Late Show with David Letterman (2010), Late Night with Jimmy Fallon (2010), The Tonight Show with Jay Leno (2011) and The Tonight Show Starring Jimmy Fallon (2014).

But what has the award-winning Swedish singer been up to as of late? What happened to Robyn Carlsson? Where has she gone? 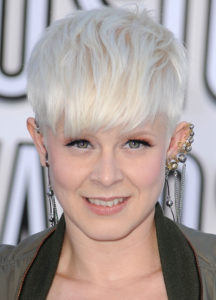 Born on June 12, 1979 in Stockholm, Sweden, Robyn Mariam Carlsson is the oldest child of parents, Maria Ericson and Wilhelm Carlsson. She has two younger siblings, a brother named Jac and a sister named Effie. Growing up, Robyn spent much of her childhood traveling with her parent’s touring theatre group until she was seven years old. Known to have always been singing, Robyn wrote her first song at the age of eleven, following her parent’s divorce earlier in the year. However her start in the entertainment industry had begun much earlierーshe auditioned for a Swedish play called, Kronbruden when she was eight years old. Shortly afterwards, she lent her voice to several animated cartoons during the mid 80’s, before performing the theme song for the Swedish television program, Lilla Sportspegeln.

When Robyn was fourteen, she watched a performance of the Swedish performing group, Legacy of Sound at her local school. Wanting to get involved in something similar herself, she approached the members during their break and sang them a song. After listening to her sing, a member named Meja took down her contact number and forwarded it over to their manager, Peter Swartling; the two would later meet at his office a few months later. Shortly after her “audition,” Swartling contacted his acquaintances music producers, Johan Ekhe and Ulf Lindstrom who would eventually work with the aspiring singer as her first producers. Robyn would ultimately sign a recording deal with Ricochet Records Sweden in 1993 at the age of fourteen, after graduating from middle school. 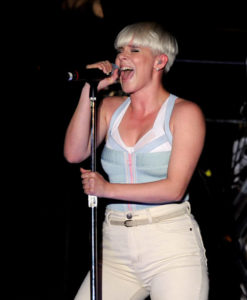 In 1995, Robyn began working on her debt album alongside Swedish music producer, Max Martin. The album entitled, Robyn Is Here was first released in October 1995 under Ariola Records in Sweden, and later hit stores in Japan in 1996 and eventually in the United states in 1997. Met with positive reviews upon its release in her native Sweden, the album was described to be “impressive” by British music journalist, Peter Robinson in an issue of the Melody Maker magazine. Featuring thirteen tracks, all of which were co-written by Robyn herself, the album peaked at the number eight spot on the Swedish Albums Chart and also saw success in the United States, having peaked at number one in the Heatseekers Albums Chart in 1997. Since then, the record has sold over 1.5 million copies across the globe and has been certified platinum in the US.

Two years after her debut, Robyn rose to fame with her teen-pop singles, Do You Know (What It Takes) and Show Me Love. Critically acclaimed, the former peaked at number ten on the Swedish Charts and eventually made its way into the top ten in the United States. A year after the release of the single, it was certified gold by the RIAA for having sold over 500,000 units in the North American country. Show Me Love also managed to peak at the number fourteenth spot on the Swedish Charts, and third on the U.S. Billboard Mainstream Top 40 chart.

With her popularity growing across the world, Robyn began working on her second debut album entitled, My Truth in 1998. Eventually released in Sweden in May 1999, the record acted as an autobiographical album for the song-writer, who had taken part in co-writing all fourteen of its tracks. However despite her earlier success in the U.S., My Truth would never be released outside of the European country. While the album had sparked some initial controversies due to the abortion-themed lyrics of one of the songs, My Truth was fairly well received and garnered many praises from music critics. Upon its release, the album debuted at the number two spot on the Swedish albums chart and later received gold certification by the Swedish Recording Industry Association for having achieved over 40,000 sales within a day of its release. As of 2001, My Truth had sold more than 130,000 copies in Sweden. 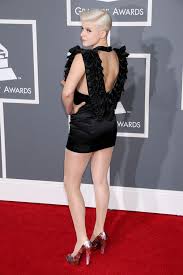 Following a label change from BMG to Jive Records in 2001, Robyn released her third studio album entitled, Don’t Stop the Music in October 2002. Similar to her previous album, it was never released in the United States and was only available in Sweden and Japan (albeit a year later). Consisting of twelve tracks, the record was a hit in the European country, and had peaked at number two on the Swedish Albums Chart. Two of its singlesーDon’t Stop the Music and Keep This Fire Burning were highly successful and had both ranked within the top ten in the music charts; the former would later sell over 60,000 units in Sweden, gaining platinum certification by the IFPI.

Wanting more creative control over her music, the singer eventually created her own record label called, Konichiwa Records in early 2005. Under the label, she released her fourth studio album entitled, Robyn in April 2005. Drawing inspirations from the Swedish rock band, Teddybears and the electronic duo, The Knife, the album featured tracks with a dance-pop and synthpop style, in contrast to her earlier R&B flair. As one of the artist’s most well-recieved hits, the self-entitled album went on to top the Swedish Charts that yearーher first to ever achieve the feat. After its original release in Sweden, Robyn was later released internationally in 2007. Having received glowing reviews from critics around the world, it would garner Robyn a Grammy Award nomination for “Best Electronic/Dance Album” in 2009.

In 2010, Robyn released her Body Talk seriesーa couple of mini-albums launched within a few months of each other. The first of the two entitled, Body Talk Pt. 1 was release in June of that year; as her fifth studio album, the record consisted of right tracks and had peaked at number one in Sweden and at number three in the United States. The second of the two mini-albums (also considered to be Robyn’s sixth studio album), Body Talk Pt. 2 was released in September 2010. While it wasn’t as favoured as the first, the album still charted fairly wellーhaving reached the top spot on the Swedish Albums Chart and second in the Dance/Electronic Albums Chart in the United States. Robyn would later release an EP entitled, Body Talk Pt. 3 in November 2010, with five new songs.

Since then, the Swedish singer has come out with two recordsーan extended play in May 2014 in collaboration with the Norwegian electronic duo, Royksopp, and a mini-album in August 2015 with her group, La Bagatelle Magique. 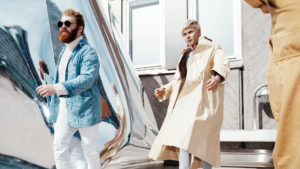 Following a prolonged break from music, Robyn returned to her native Sweden where she ended up catching up with an old friendー renowned DJ, Christian Falk. As one of the singer’s most respected mentors, Falk had worked with Robyn ever since she was fifteen years old and had helped to put her career on track during the 1990’s by producing the lead track for her debut album, Robyn Is Here.

After casually meeting up in Falk’s Sweden home, the pair eventually came up with the idea of working on a collaboration project; inspired by each other’s music, the two continued to work on the record for over a year. Recruiting help from keyboardist, Markus Jagerstedt, the trio would be known as the group, La Bagatelle Magique. However despite their dedication, the project would ultimately be halted following Falk’s diagnosis of pancreatic cancer; tragically, Falk passed away in July 2014. While it took some time, the group eventually completed the tracks in 2015.

The tracks were later released as part of a mini-LP called, Love is Free in August 2015. In support of the new release, the group had scheduled a handful of shows around world, including one at the Popaganda Music Festival in Sweden. However despite the original plans, a number of subsequent performances were later cancelled due to emotional difficulties amongst the group; two of the cancelled shows included one to be held at Rock in Rio in Brazil and another at the Treasure Island Music Festival in San Francisco. Following the cancellation, Robyn apologized to fans in a heartfelt statement, stating that “it was much harder singing these songs than [she’d] thought.”

A year after these events, Robyn once again returned on to the stage to perform several new renditions of her songs at the Boston Calling Music Festivalーwith more show dates to be scheduled in the future.

If you’d like to stay connected with the singer, you can do so by following her on Twitter (@robynkonichiwa) or by visiting her official Facebook page!