Colin Grussing, the founder and owner of Rootsuit, has just stepped into the Shark Tank. He is seeking an investment of $100,000 in exchange for 15% of his company. Colin starts the pitch right away with a significant flair, as he is wearing a spandex-lycra suit underneath his regular clothes. He could tell the Sharks about his product, but he would rather just show them what Rootsuit is about.

While hip hop music plays on the audio, Colin blows a whistle and a gigantic paper sign which reads “Go Root Suit” is held up in the hallway that entrants for the Shark Tank walk down. Colin then slides the hood of his own RootSuit up over his face and the paper is broken through, with people in a colorful brigade of RootSuits storming out. The colors ranged from a cool blue camo to a patriotic, American-inspired red white and blue with stars, back to a simple tuxedo scheme of black and white, all the way to a variety of different solid colors and shifting gradients. 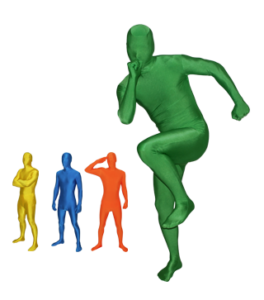 The brigade of RootSuiters run out, and one in a black suit immediately rushes up to Kevin’s face and begins to poke at him. One in a red suit runs up to Lori’s notebook and begins to leaf through the pages while another in a half-blue and half-white RootSuit begins to grind and dance on Lori’s lap. Another runs over and grabs Robert’s tie, and the fascinating display comes to an end but leaves a very, very confused look on each of the Sharks’ faces. This, Colin explains, is RootSuit.
Wearing a RootSuit offers an experience that a person cannot get in any other way – it lets you stand out in a crowd, and it gives you a unique charisma that you might not have otherwise. Wear RootSuit to a concert and you will probably get pulled on stage; wear it to a game and you will probably get on the big screen. As Colin mentions this, a man in a gray RootSuit sneaks up behind the Sharks in their chairs and, equipped with shark props, begins to lurk behind them.

Colin started selling RootSuits in 2008 and as soon as he gave it a name, the entire thing blew up. Kevin is the first to ask – since RootSuit’s hood covers your face, is it easy to see out of? Colin replies that there is some limited visibility, but overall, there is some acceptable visibility but operating vehicles is not a reality. Kevin then turns to sales, asking if he has made any money, to which Colin excitedly replies, ‘hell yeah.’ In the last year, RootSuit sold just under 10,000 units which came out to a revenue of just under $520,000, and a gross revenue (profit) of $104,000. All of the Sharks are stunned by this.

Kevin asks about the definition of the sales model, which Colin explains is entirely e-commerce – there are no retailers whatsoever, which is also a reason why he has come to the Shark Tank. Robert mentions that his 18-year old son and his friends all wear similar suits like the RootSuit and go to nightclubs or parties, so he has seen it in action. However, there are numerous knock-offs, so Robert is unsure if he saw RootSuit or one of the many imitators. Colin explains that RootSuit was the first on the market in 2008 and had huge success, which meant of course that competition was brought in. 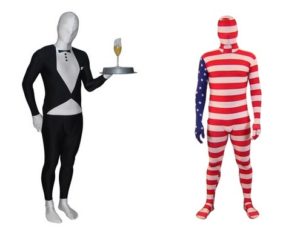 All of the Sharks spike their curiosity about the competition and ask Colin more about the competition. Mark then asks if there is an identifier or easy way to acknowledge the brand of RootSuit, such as if there is a logo on the foot or anything. Colin looks lost for a moment and even picks up his own foot, but then admits that the logo or some sort of branding would probably be a good idea. With some of the money, he would like to do a little bit more investigation. Robert then steps back in and continues on about how great the idea is and how recognizable it is, saying that if you were to go snowboarding or skiing, you would see plenty of people with the similar ideas. The problem is that while there may be a growing market, RootSuit may not have a definitive share of that market, and part of that is in part to the fact that it is hard to show that the product that a person is wearing is a RootSuit product. So, with all this said, Robert is the first to exit the deal.

However, Colin definitely has an answer for Robert’s concerns, but Lori steps in next. While she likes the RootSuit and thinks it is definitely cool, she also sees that Colin has a competition problem and he does not know enough about ways to deal with this issue. Lori is also out of the deal, leaving just three Sharks – Colin addresses the competition ordeal before any more Sharks exit out. Lots of businesses have competition and the way that they deal with this is through branding, and Colin looks to Daymond. How many people bought products from Fubu, the clothing company that Daymond founded, once they started to understand where the clothing was from? Daymond acquises this point and agrees with Colin.

Kevin steps in and voices his concern; he likes to invest in rich companies that are growing and make them even richer through a valid strategy. He does not know how the RootSuit industry could turn into a $50 million business, so as an investor, Kevin feels that there is simply no possibility of making a significant amount of money. Kevin is out of the deal, as well. Daymond agrees with Kevin’s points, but the reality is that RootSuit is ultimately profitable. However, the struggle will be in taking the product to retail and beyond, so while Daymond intends to make an offer, it will be a rather low and disappointing one – a rather “Shark-y” offer. Daymond then offers up $100,000 in exchange for 50% of the company, with a simple contingency of getting the product into retail. This would mean that Daymond’s work with the company has been validated and should be continued.

Colin loves the contingency and would love to partner with Daymond, then seems to drop off and stall as he gathers his thoughts. Kevin then brings up that he wants to hear from Mark, and Mark then says he wants to hear what Colin will say in response to Daymond’s offer. Colin finds himself flustered and takes a moment to regather his thoughts while Robert sums up the situation with three Sharks out, one offer made, and Mark just waiting to play the game. Colin then says that he would love for Mark and Daymond to go in together on an offer and make a combined offer of $200,000. Unfortunately, Daymond then says he is on the fence and Colin should begin to entertain Mark since he may rescind that offer.

Kevin then gives an example of a dog who has a bone in his mouth, walks away to find another bone, then returns to find that his first bone has been taken. Colin, like the dog, has a bone in his mouth and may risk losing both bones, so Colin needs to think more about the deal. Just before the show cuts away to a commercial break, Daymond looks very hesitant and stressed about his offer of $100,000.

Lori then says that this could be the defining moment for Colin’s business, as she has seen it happen many times, but Daymond steps in and says that while he likes Colin, he is out of the deal. He knows just how much work he would have to put in to get his investment out of the company, but Daymond values his time too much. Daymond is out of the deal, leaving just Mark remaining.

The writing is on the wall; Mark admits that while he loves the company and is proud that Colin is making such a huge amount of profit, Colin would ultimately be an idiot to take a partner. Colin is good at what he is doing, as he is making sufficient money on his own. There are businesses which are better off being owned by the entrepreneur instead of owned by investors, and Colin is in that situation.

Unfortunately, Colin does not find his investment in the Shark Tank. On his way out of the Shark Tank, he raises his purple hood up over his head and glumly exits the room. Robert jokingly mentions that Colin is like a superhero when he puts the hood on.

RootSuit Now in 2018 – The After Shark Tank Update

Since the appearance of RootSuit on Shark Tank, I can imagine that sales have taken off greatly. Thanks to the popular show It’s Always Sunny in Philadelphia, the “Greenman” character has popularized the idea of spandex suits due to the portrayal of the character by Charlie Day. RootSuit has since revamped their website and focused heavily on customer satisfaction, and Rootsuit is still focusing strictly on e-commerce – no big-box retailers or brick-and-mortar stores carry and RootSuit products. RootSuit has placed a lot of emphasis on their sizing webpage, which includes ample amount of literature for finding an appropriate size for your RootSuit.