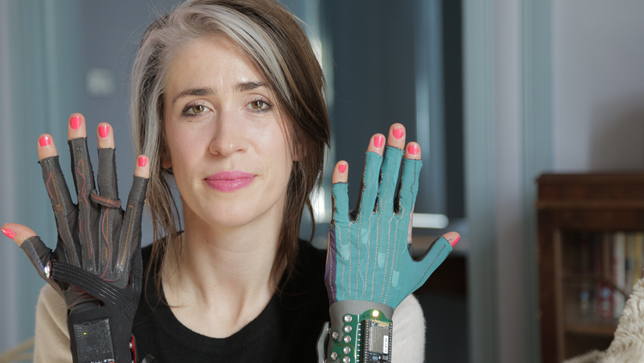 Imogen Heap is a British singer-songwrtier best known for being the other half of the musical duo, Frou Frou. An instrumentalist since a young age, Heap has received classical training in the piano, clarinet and the cello. Eventually writing her first song at the age of thirteen, she later secured a recording contract with the independent label, Almo Sounds by the time she was eighteen. After singing briefly as a guest vocalist with the experimental band Acacia, she later released her debut album entitled, iMegaphone in 1998. Following her initial album, Heap continued to record and release a number of records including the singles Shine, Getting Scared, Oh Me Oh My and Come Here Boy. In the early 2000’s, Heap was invited to take part in a collaborative project with Guy Sigsworth (whom she had worked with previously) as a member of the musical duo, Frou Frouーthe pair would release their first album, Details in August 2002.

Throughout the years, Heap has released four full-length albums (including one under Frou Frou), nine singles and a dozen music videos. Known for incorporating elements of dance, electronica and rock into her tunes, she is also recognized for her extensive use of manipulated electronic sounds in her tracks. Undoubtedly a talented musician, Heap has won a large handful of awards as a singer-songwriter since her debut back in 1998. To date, she has received two Grammy Awards; one in 2010 for “Best Eingineered Non-Classical Album” for her album, Ellipse and another in 2016 for the category of “Album of the Year” for her work as a producer on Taylor Swift’s album, 1989. In 2010, Heap was also the recipient of the Ivor Novello Award for International Achievement by the British Academy.

On top of her solo projects, Heap has been involved as a songwriter for a numerous well-known television series including Smallville (2002), CSI: Miami (2006), Ghost Whisperer (2008), Vampire Diaries (2009), Gossip Girl (2009) and Melrose Place (2009). A frequent guest entertainer, the singer has also been invited to perform on many TV programmings such as The Tonight Show with Jay Leno (2006), MTVU Woodie Awards (2006), Late Show with David Letterman (2009), Map the Music (2010), and various others. In 2009, she also participated in the American dancing competition series, So You Think You Can Dance as a performer; a few years later, she also went on the stage for the Canadian version of the same show.

So what has the talented visual artist been up since then? What new projects have she taken on the past couple of years? Where is she now in 2018? What happened to Imogen Heap? 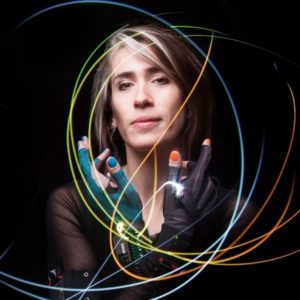 Born on December 9, 1977, in Havering, East London, Imogen Jennifer Heap is the daughter of of a construction worker and an art therapies; she has no siblings. Encouraged to pursue music as a young girl, Heap began playing a variety of instruments when she was in grade school including the cello, clarinet and the piano. When she was twelve years old, her parents split up; shortly afterwards, she began to indulge herself with more musical training and eventually picked up both the guitar and the drums. As a teen, Heap was sent to boarding school where she did not find herself getting along with her music teacher; as a result, she spent much of her time self-learning a lot of musical elements such as sequencing, sampling and music engineering

Wanting to further her musical education, she also enrolee at the BRIT School of Performing Arts & Technology in the city of Croydon after school; it was during that time that she first developed an interest for technology. She would later recall learning about electronic music and different recording techniques at the school’s recording studio. Shortly after her days of being a student, Heap was introduced to English singer-songwriter, Nik Kershaw through his manager; together, the pair recorded four demo tracks that she later forwarded to Rondor Music, an independent music publisher. Impressed with Heap’s tunes, the company soon offered the aspiring singer her first recording deal at the age of eighteen, under Almo Sounds. Prior to the release of her debut album, she would go on to work with Acacia, an experimental pop band featuring Guy Sigsworth. As a guest vocalist, Heap contributed to multiple Acacia albums and singles including the song, Maddening Shroud which would later be re-released by Heap under Frou Frou. 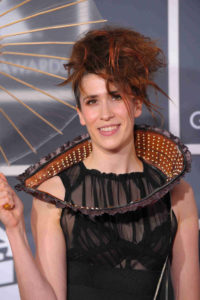 A few years after securing her deal with Almo Sounds, Heap released her first studio album entitled, iMegaphone (which his an anagram of her name) in June 1998. Featuring a mixture of self-produced and self-penned songs, the album was produced with a number of music producers including Dave Stewart, David Kahne and Guy Sigsworth. Generally well received upon hitting the stores, iMegaphone consisted of eleven tracks, all of which were composed and written by Heap herself. Although it wouldn’t achieve charting success, the album did go on to spawn four singles: Shine, Getting Scared, Oh Me Oh My and Come Here Boy. In 2002, the album was re-released in Japan under Aozora Records.

However not long after the release of her debut album, Heap found herself in a troubling situation. Despite her well-received album, her recording label at the time, Almo Sounds, had made the decision to cut a significant amount of funding for UK promotion; they also gave the singer a strict deadline for the delivery of her second album. Soon after, the company made the announcement that they would be selling the label to Universals; as a result, its existing artists would have to find a different label to sign with or be released altogether. After everything was said and done, Heap found herself without a recording contract after being dropped from the company.

Carrying on with her songwriting in spite of being released from the label, Heap began to work on a few tracks for her second studio album. However without a recording deal, she had no means of releasing a record. During this time, she was eventually featured on two singles: Blanket and Meantime. Having kept in touch with her former friend from her Acadia days, Guy Sigsworth, the two soon made the decision to establish an musical electronic duo; thus Frou Frou was born. Working equally as hard on the new project, the pair started to write and arrange songs for the duo’s debut record. After months of hard work, Frou Frou released their studio album, Details in August 2002. Critically acclaimed, the album enjoyed much positive attention and later produced the singles Must Be Dreaming, It’s Good To Be in Love and Breathe It In. However despite their efforts, the duo was ultimately told by their record company, Island Records, that they would ultimately not be interested in the production of a second album.

Years after the release of her first solo album, it was announced in 2003 that Heap was going to be self-producing her second full-length album; two of its tracksーGoodnight and Go and Just For Now were later premiered online prior to its release. The album entitled, Speak For Yourself was eventually released in July 2005 under Heap’s own music label, Megaphonic Records. Produced, written and arranged entirely by Heap, the project was a costly one for the artist who had to re-morgage her flat in order to fund the production costs. Met with positive feedback after its release, the album consisted of twelve tracks; including Goodnight and Go and Hide and Seek which would later be featured in the American television drama, The O.C. As of August 2014, the album has sold over 500,000 copies and has achieved Gold status from the RIAA. 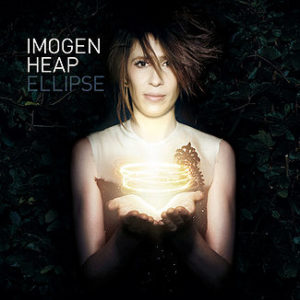 Continuing to record music, Heap released her third studio album, Ellipse in August 2009. Recorded in her Essex childhood home, the album’s title was a reference to the distinctive shape of the building. A major hit, Ellipse opened with much positive reception from critics and quickly soared to to the number one position on the Billboard Electronic Albums Chart; it also charted second on the Digital Albums Chart, third on the Top Alternative Albums Chart and fourth on the Top Rock Albums Chart in the United States. In Canada, the album also saw success where it peaked at number four on the RPM Albums Chartーmaking it her first record to chart outside of the US. In December of that year, Ellipse would also garner Heap two Grammy Award nominations and a win.

It wasn’t until 2014 that the artist released her fourth album entitled, Sparks. Given a B- rating from critics at Consequence of Sound, the album included fourteen tracks on its track listーincluding Telemiscommunications and Minds Without Fear which were collaboration projects with deadmau 5 and Vishal-Shekhar respectively. Not long afterwards, it reached the top of the Top Electronic Albums Chart and settled in at number eleven on the Top Digital Albums Chart and at number seventeen on the Tastemaker Albums Chart; it also eventually charted in the UK where it peaked at number forty. 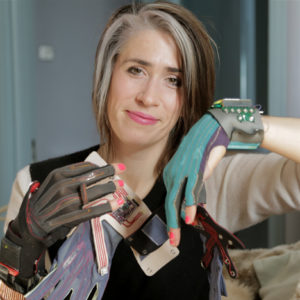 Early this September, an announcement was made that Heap will be leading a five-day long intensive residency program at Brighter Sound, a Manchester-Based music organization in October 2016. A producer of various creative music projects, Brighter Sound helps to pioneer new ways of exploring the process of music producing through a wide range of invigorating programs. According to a post on its official website, the residency will invite twelve multi-talented songwriters and artists from across the North West in order to collaborate and produce a “mini-ecosystem around a song” that will then be unveiled at the event’s final day.

Having always been one for technology, the singer also made the headlines in February when it was stated that she was going to change up the methods by which one can purchase her music. More specifically, through her Mycelia projects, fans will be able to buy her tunes using block chainsーa form of technology similar in nature to that of bit coins, a digital currency. While Heap has clarified that it will be in no way, a replacement for existing music sales, she does believe that it has the possibility of upturning the industry as a whole. With the block chains system, musicians will be able to handle the sales themselves, effectively giving them more freedom and control over their careers. How well will the new system work for artists like Heap? Only time can tell!

Wanting to get your hands on more news surrounding the Grammy Award-winning star? You’ll be happy to know that you can do so easily by following Imogen Heap herself on social mediaーyou can find her either on Instagram (@imogenheap) or Twitter (@imogenheap). Her official website (imogenheap.com) is also worth a visit as well if you’re a fan!