What Happened to Tricky – News & Updates 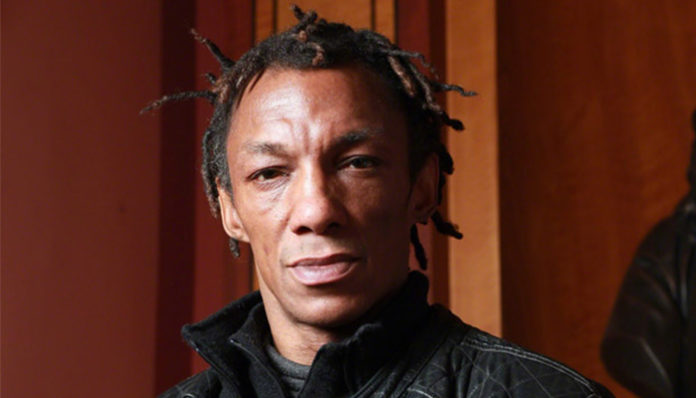 Adrian Nicholas Matthews Thaws, more commonly known as his stage name Tricky, is an English rapper who first rose to fame during the mid 90’s. Although he had a difficult childhood, often hanging out with the wrong crowds, he eventually turned his life into something more positive after discovering the art of lyric-writing in his late teens. Finding himself drawn to rap music, he soon became a member of a hip hop posse known as The Wild Bunch (who later changed their name to Massive Attack); he spent much of the late 80’s rapping and experimenting with mixing at various parties and venues. A few years into performing with the group, Tricky decided to embark on a solo career after running into creative differences with the rest of its members. Signing with 4th & B’way in 1993, the R&B artist went on to released his debut album, Maxinquaye in February 1995.

Rising in prominence in his native United Kingdom, Tricky quickly followed up with two more studio album releases the following year, entitled Nearly God and Pre-Millenium Tension respectively. Recording throughout the rest of the 90’s and into the new millennium, the rapper has since released twelve full-length albums, and over thirty singles. Despite his long discography however, his best-performing album to date remains to be that of his debut album, Maxinquarye. Regarded as a pioneer of the trip hop style which peaked in popularity in the UK during the 90’s, Tricky is often recognized for his unique musical style which draws elements from different genres such as alternative rock, raga and hip hop. Over the years, he has collaborated with many music artists such as PJ Harvey, Grace Jones, Terry Hall and Gravediggaz.

Although Tricky is a musician first and foremost, it hasn’t stopped him from taking part in various films. In 1997, the rapper made his on-screen debut in the action flick, The Fifth Element, where he portrayed the role of an evil businessman’s right-hand man. From there, it wasn’t until 2004 that he appeared in his next acting projectーa drama film called, Clean where he played as himself. The following year, he landed a recurring part in the comedy television series, Girlfriends (2005). Aside from his work as an actor, Tricky has also appeared on the small screen in a number of variety and talk shows including Jo Whiley (1998), The Chris Rock Show (1998), Later…With Jools Holland (1998) and Late Show with David Letterman (2008).

So what has Tricky been up to since then? What has he come out with the past few years? What happened to the English rapper? Where is he now in 2018?

Tricky’s Upbringing and Eventual Musical Beginnings with The Massive Attack 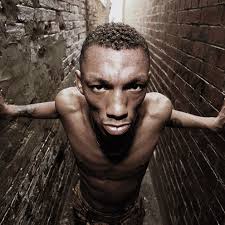 Born on January 27, 1968, in Bristol, England, Tricky (Real Name: Adrian Nicholas Matthews Thaws) is the son of Roy Thaws and Maxine Quaye. When he was a preschooler, his mother committed suicide due to alleged complications from epilepsy. However due to the fact that his father had left the family even prior to his birth, Tricky was raised almost entirely by his grandmother as a child. Growing up in a less-than-ideal neighbourhood in Knowle West, he often skipped school to watch old horror movies at home. Further complicating his already difficult childhood, Tricky soon became involved with crime after hanging out with the wrong crowds as a young teen; at one point, he was even a member of a gang, who regularly got himself into trouble regarding burglary and car theft.

Despite his wild lifestyle however, he did find time for musicーas a teen, rap was something he was especially fond of. When he was fifteen years old, Tricky began writing his own lyrics for the first time. After spending a brief period of time in prison as an adolescent, he met DJ Milo in the mid 80’s and eventually began spending time with a group called The Wild Bunch, producing and playing music at various parties and venues. Following their name change to Massive Attack in 1987, Tricky went on to perform as a vocalist with the trip hop posse; together, they later released their debut studio album entitled, Blue Lines in 1991. Prior to his departure from Massive Attack in the mid 90’s, he took part in the recording of their second full-length album, Protection which was released in 1994. 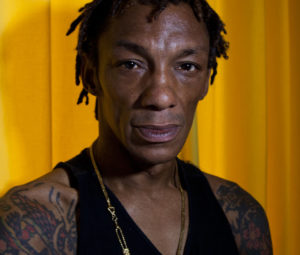 Citing creative differences, Tricky eventually part ways with Massive Attack after the release of their second studio album. Securing a recording deal with 4th & B’way, a subsidiary of Island Records, the R&B artist released his debut solo album, Maxinquaye in February 1995, with help from co-producer Mark Saunders. Using various dub production techniques, the album was noted for featuring a blend of soul, hip hop, rock and experimental music as well as heavily modified samples. Revolving around themes of relationships and intimacy, many of the disc’s lyrics were inspired and influenced by Tricky’s own experiences in the British drug world.

Critically acclaimed, Maxinquaye, which was named after his mother, peaked at number three on the UK Albums Chart and quickly reached over 100,000 in sales during the first few months. Commended for its unique trip hop style, it was regarded by many critics at the time do be one of the best records of the year. Showered with nothing but favourable reviews all around, the album was an immediate fan favourite; since its release, it has received nothing but close to perfect reviews. From its twelve-song track list, a couple of stand outs include Overcome and Black Steel, both of which were eventually produced as singles. Tricky’s most successful album to date, the Gold certified record has sold over 500,000 units across the globe to date.

In February 1996, Tricky released his second studio album entitled Nearly God. Described by the rapper himself to be a “compilation of exceptional yet unfinished demos”, the album showcased twelve different tracks, many of which were either collaboration with other artists or cover renditions of others’ songs. Similar to his debut effort, it received critical acclaim from critics upon its release, many of whom praised it for its aesthetic arrangements. Recorded within a period of three weeks, Nearly God charted on the UK Albums chart at number ten; it also peaked at number seventy-seven and at number thirty-seven in Australia and Canada respectively. Although the album was not met with the same level of success compared to Maxinquayne, it was still considered to be a successful release for the singer; by the end of 1996, it was voted by readers to be the “19th Best Album of the Year” in the Pazz & Jop, an annual poll conducted on The Village Voice newspaper.

Later that same year, the rapper released his next studio album, Pre-Millenium Tension. Trying to “get away from the trip hop label” with which his earlier records had been categorized together by critics, the album was mainly recorded and produced in Jamaica, although bits and parts were also recorded in New York. Described by critics to contain “newer, more sinister sounds”, Pre-Millenium Tension featured eleven songs, three of which were covers. Included in Q Magazine’s list of “50 Heaviest Albums of All Time”, it was met with favourable reviews upon its release and currently holds a four star rating on AllMusic. Soon a Silver certified album, it peaked at number thirty in his native UK and eventually also charted in Australia and the United States.

In May 1998, Tricky released his fourth full-length album entitled Angels with Dirty Faces. Another hit for the trip hop artist, it has been described as his “most cogent work since his debut” by contemporary critics. Greatly praised, the album contained fourteen tracks, one of which featured fellow artist, PJ Harvey. Given an A- rating from Entertainment weekly, Dirty Faces reached number twenty three on the UK Albums Chart; his most successful album overseas, it also charted in over half a dozen other countries including the United States, Australia, Belgium, Canada, France, Sweden and Norway. 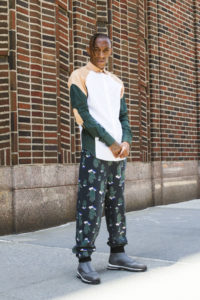 A year after the new millennium, the English artist released his five album entitled, Blowback in July 2001. Similar to his second effort Nearly Gold, the album featured several other artists in collaborations although its sounds were considerably brighter; a few of the guest performers include Anthony Kiedis, John Frusciante, Alanis Morissette and Hawkman.

Although it was passed upon by many long-time fans, Blowback received generally favourable reviews from critics; in fact music journalist Simon Price referred to it as “Tricky’s best album since Pre-Millenium Tension.” Boasting thirteen electronica and nu metal-oriented style tracks, it was also notable for its song Excess which has since been used in various television series such as Queen of the Damned, Glory Days, Bad Company and Fastlane. Shortly after its release, it peaked at number thirty-four in the UK; it saw the most success in Austria where it reached number five on the charts.

Over the next decade, Tricky continued to release multiple albumsーa few highlights include Vulnerable (2003), Knowle West Boy (2008) and False Idols (2013), which climbed up to number eighty-eight, number sixty-three and number sixty-six respectively on the UK Albums Chart. 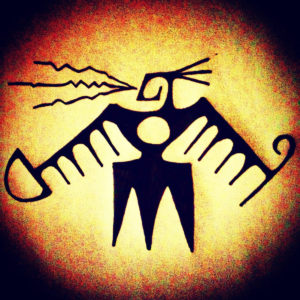 A few months ago this June, it was announced that the 48 year old musician was going to be joining the award-winning vocal group Massive Attack, with whom he performed with back during the early 90’s, back on the stage for a performance together at Barclaycard presents British Summer Time Hyde Parkーan annual music festival which takes place in London’s own Hyde Park. Their second concert together to date (and first in the UK), Tricky was seen at the event accompanied by Robert Del Naja and Grant Marshallーtwo members of the trip hop duo. The exclusive show took place on July 1, 2016 and ended up seeing hundreds in attendance.

After a two year break, Tricky returned to the scene this January with the release of his latest studio album, Skilled Mechanicsーhis first full-length album since his self-titled Adrian Thaws back in 2014. Another collaborative project, the new record featured two of the artist’s long-time friends, drummer Luke Harris and DJ Milo. Originally unveiled back in 2015, Skilled Mechanics consisted of thirteen tracks including Here My Dear, How’s Your Life, I’m Not Going and Beijing to Berlin, amongst others. Tricky’s third record via False Idols, it eventually peaked at number 120 in Belgium, although it did not chart in his native UK.

If you’d like to stay connected and up-to-date with the trip hop artist, you can do so easily by following his online presence on social mediaーyou can find Tricky on Twitter (@knowlewestboy) as well as on Instagram (@trickyofficial). While you’re at it, be sure to also visit his official Facebook page and website for some of his latest news!