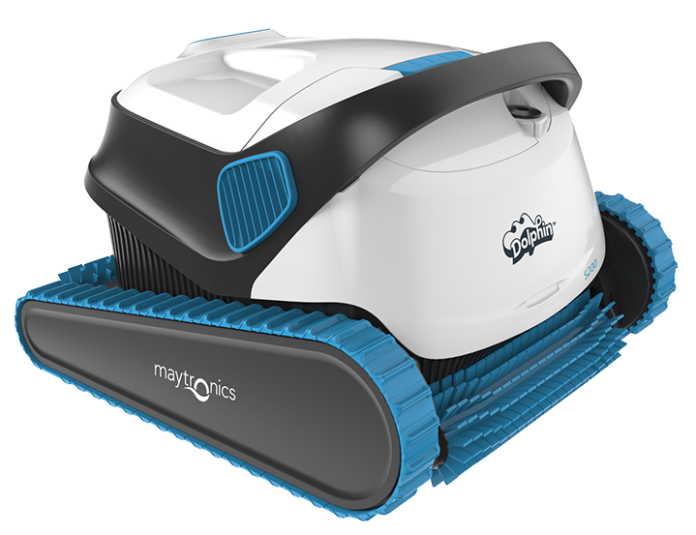 Here we are now at the true end. A long six months it has been, but until they release a new model of robotic pool cleaner, it is finally time to step away. These last two that I had a chance to check out are similar to each other, and indeed fall into the Dolphin clone category, but the quality on offer from the S 300 and the 300i really deserves the praise I am about to heap upon them. The Dolphin clones bots exist for a simple reason, Maytronics, the owner of the Dolphin brand, have exclusivity deals with online and offline retailers, and so to maintain those merely switch up the aesthetics of their bots, maybe adding a feature. It’s great for consumers, means when you find a bot you like you can look at a wider range of prices.

Today we are looking at the lower end high end flagship device from Maytronics. These new fangled post ultra modern builds fascinate me, mostly because I am unsure as to where they can go with them next. They have all the core features I would want, their design has been honed to pure user ease perfection, and for the most part the prices are on point. My issue is the highest end build, which I will be getting into next week, and how it compares to one step down.

So let’s break this bot down, see if it is the right robotic pool cleaner for you.

Much in the same way that the Active series of bots are fantastic, the S 300 is a wonderfully well built bot. The core design is robust and sturdy, likely to be capable of taking a hit. The flush nature of the design means that there is no rattle, there shouldn’t be in general, but I prefer to check for it anyway.

The look of the build matches the Active bots as well, and I am a big fan of the aesthetics of these bots. The symmetry is there, added into some nice looking treads, a short but well formed handle and a nice black stripe running horizontally across the thing. It cuts the cool clue nicely too. The vents are in pleasing positions, thee void the internal water when removing it from the pool and the way they have been integrated into the design is amazing.

Overall, the look of the build is not that important, but it becomes so once you have decided you want the S 300, there are two other bots with the same specs, but slightly different aesthetics, at that stage you go for the one you like the look of the most, and for me it is the S 300.

I have. over the last several months, been able to hone in on the three simple things that any robotic pool cleaner must be able to do in order to be worth considering. There are other factors to take into account, else this review would end after the features section, but if a bot can’t do these three things you can usually write it off as a lemon. It must be able to clean the pool floor, including breaking up larger debris. It must be able to filter the pool water well within a single cycle and it must be able to climb walls. The S 300 can do all of that, and more.

The S 300 is an upper mid range in ground pool cleaner. The cable is 60 ft long, and is a swivel cable. Swivel cables are fantastic, as they reduce the chances of a cable becoming tangled, and thus stopping the cycle. There are few things more annoying than a stopped cycle. The on board pool pump with the S 300 is one of the most powerful on the market, filtering 3,735 gallons of water every hour, leaving your pool looking crystal clear.

The scrubbing brushes have also had something of an upgrade. The old Nautilus’s brushes were wonderful, but the new ones are softer, and less likely to scour your pool bottom. In addition they rotate twice as fast, allowing them to break up all kinds of debris quickly and effectively. Standard cycle time is 2 hours, for a deep clean. There is also a speed clean option that sprints through your pool in an hour. The effectiveness of those scrubbing brushes means that the speed clean option is way more viable with this model. It can also climb, too much a rarity in the robotic pool cleaner market, especially with the above ground models. Seeing this bot make that 90 degree transition to the pool wall is glorious.

Those cover my personal prerequisites, not all cleaners have those, but I consider them standards. The bonus features on the S 300 are impressive. We have Bluetooth remote control options, any Bluetooth device can interface and direct the bot. There is no dual drive motor, so don;t expect true 1:1 motion, but it is fairly easy to get the bot to where you need it to be. There is also a free caddy, great for getting the bot from Shed to pool, and the bot comes with a weekly timer function. That weekly timer is a bit of an odd one. Without a full filter indicator it is better to take the bot out after every use anyway, so…

Overall this is an impressive build, it has all the features I like to see in a bot, and a few bells and whistles on the side. There are other features that elevate this build above the competition, but we’ll get to those in the ease of use section.

Maytronics Dolphin S 300 Ease of Use

I have come to the conclusion that there are two core kinds of robotic pool cleaner currently on the market. The older style external pump systems and the new school internal pump systems. The Older style is harder to set up, but cheaper to run, while the new style is easy to use, but costs money per cycle in energy costs. I prefer the new style, internal pumps these days are fantastic, and the power in the S 300 is impressive. The all in one bots come themselves in two flavors, The Ultra Moderns and the Legacy Design builds. Legacy builds tend to be harder to use, with filter bags and bottom mounted filter chambers, whereas the Ultra Moderns use filter meshes and top loading systems. These S 300 series bots all use filter canisters, making them more Post Ultra Modern. And I love them.

The systems used in the S 300 removes all issues I had with the Ultra Moderns. The top loading chamber means there is no reason to flip the bot, which tends to be heavy, and the filter canister fixes the cleaning problem that has existed since the filter bag days. Cleaning a filter bag was a chore and the replacement system, the filter mesh, was nearly as bad, add in the fact that you had to clean out the bot too and we had a head ache. Here you simply remove a whole chamber from the bot and hose it down. It saves so much time and effort you wouldn’t believe. The handle is okay, getting it out of the pool is a little difficult, but less so than older heavier bots, and the caddy makes moving it around very easy. Actual use is a simple matter of dropping it in the pool and setting the cycle.

I used to use this section to nit pick. Even legacy design models were easy to use, and only came with a few day to day annoyances. The industry has spent years making their products as easy to use as possible, and they have done a great job. The S 300 represents the pinnacle of years of design work, and I really don’t see how they could make it any better.

Onto the pricing section now, and I am happy to report that I have seen the S 300 selling in the $900 to $1100 price range. You can go second hand and get it a little cheaper, but then you do yourself out of a warranty. This price range for this bot is perfect. It is only a little more expensive than the S 200, and has a few choice features that may push it to perfection for some. Personally I prefer the range and feature set in the S 200, but it takes all sorts.

There is another pricing factor to take into account. The running costs. They aren’t high, but they do depend on the price of electricity in your area. I have worked it out to be around 14c in most places, granted I have seen it goes as high as 17c, but even that doesn’t sound unreasonable on a per cycle basis. I do believe that the long term effects need to be taken into account, most of us do not pay attention to our increasing power needs after all.

Now the warranty. I spent a long time looking for the Maytronic warranty, even contacted them about it, but alas I am still left bereft. It means I cannot provide as in deep an analysis of it as I did for the Aquabot line, or the Hayward line. I means a whole slew of reviews are left unfinished. Still, what I did find out is that with the S 300 we have a 2 year limited warranty. On average a limited warranty tends to be a little not good. There are outliers, like the wonderful limited warranty from Hayward, but on the whole it tends to be bad news.

It does everything we need it to do, and it does it fast. The bonus features are just right, remote control options being one of my favorite bonus features. The differences between the S 200 and the S 300 are negligible though, so if the core functions and wonderful ease of use options are what you are looking for, it can be had at a lower price.