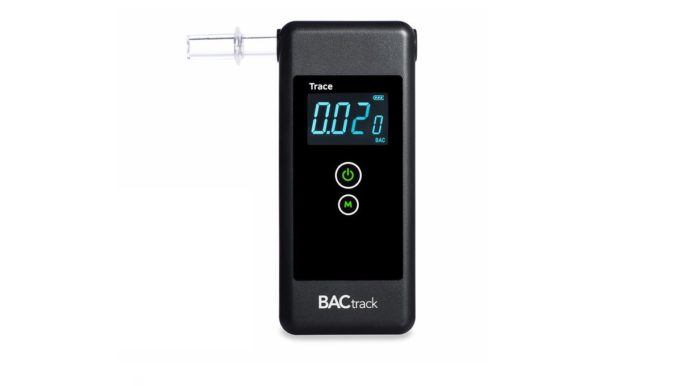 It was touch and go for a while there, but my liver function test came back fine, so time to test out another breathalyzer. This week I’m going back to the well, another BACtrack model, and it is always a joy to try out their products. Last time I put the S80 through its paces, and I found it to be one of the most complete products on the market. it had everything you could want out of a breathalyzer, and a few bonus features besides. It came with a caveat, that price tag. Well, the Trace uses very similar tech, if a little downgraded, to deliver a model that is both affordable and top notch.

There are two kinds of breathalyzers on the market. The high quality fuel cell builds, and the lower quality semi conductor models. The semi conductor breathalyzers are little more than novelties. They are cheap, which is nice, but under no circumstances should you consider them an authority. The tech simply cannot give an accurate reading. Fuel cell based breathalyzers are accurate to within a thousandth of a percent, and as such are far more reliable indicators of your level of inebriation.

Today I will be taking a look at the Trace, and it very much sits in the Fuel Cell based camp. The blood alcohol content percentages sit in the 0.000% to 4.000% range, a cut above the slightly cheaper fuel cell based AccuMed Professional. It is more than up to verifying whether or not you are okay to drive, and is a sound investment.

I will be using my usual methodology to test out this device, except now I have three other models to compare results to, the Vaster, the AccuMed and the BACtrack S80. The S80 is supposed to have the higher quality cell, so I expect this one to give slightly more erratic results than the flag ship model from BACtrack. Me and a small group of friends will test sober, all will test with one beer, and increment it, comparing the results to my previous findings. It is the most scientific keger imaginable.

So let’s get to the build of the breathalyzer. 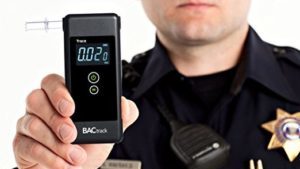 I always hark back to the Vaster here, as it is the cheapest model on the market. The Vaster felt a little toy like, which belayed its novelty device nature, while the Trace feels more robust. it is a heavier device, but not uncomfortably so. In terms of comfort it is a little awkward blowing into the mouthpiece, the S80 had it on an angle, but the trace has gone for the far more traditional hanging off the side look. In addition, it is not the most ergonomic device I have ever held. You tend to find that ergonomics plays second fiddle to compactness in these little breathalyzers, and I can see the benefit to that, but a slight grove would go a long way.

The mouth pieces themselves are identical to the ones found on the S80, so I was able to reuse the ones I got for that, small saving. You’ll need to shell out $5.99 for a pack of 10, as it only comes with six extras, and the last thing you want is to have to share them around. I praised the S80 for its aesthetics, but it pales in comparison to the Trace. It might be cheaper to buy, but it looks like a million bucks. I love the green buttons, and the integrated screen looks a little better here. You can’t go wrong with a matte black body either.

Onto the innards, and I’ll take a moment here to compare semi conductor testers with the far superior Fuel Cell models. Semi conductor breathalyzers rely on older tech, and they are a whole lot less accurate. the main reason fro this is the internal particle reaction. On a semi conductor model many different kinds of particle will trigger resistance, alcohol, yes, but also cigarette smoke, hair spray, and even the natural breath of those who suffer from diabetes. In addition, even under perfect circumstances, which are hard to get, the range of resistances is very small, so the result is skewed to extremes, lots of alcohol/other, or little. With fuel cell based models the resistance reaction is only triggered by alcohol particles, and the range of measurable resistances is far broader, giving us the more accurate result.

This is poised to steal the mid range crown away from the AccuMed BAC-178, as not only is it well priced, but it comes with a few more advanced features not seen in the slightly cheaper competitor. What I find most impressive is its memory function, able to recall the previous ten tests. It also measures temperature, allows you to set your own warning levels, and has a nice solenoid pump inside, to help those with breathing difficulties get enough air into the mouthpiece for an accurate reading, for the most part.

Using it is simple, like almost everything else about it. All you have to do is hold the power button for 10 seconds, blow into the mouthpiece for the same and wait a few to get the result. As I have mentioned, looking at the tech used is enough to let you know that you can trust its answer.

Overall, there is a lot to like here, the build is compact, but robust, and the features go above and beyond my own requirements, but then all I require is that a breathalyzer uses fuel cells.

Now we come to the testing, and I was quite pleased with the results. We all blew, with our own mouthpieces, to set a baseline for sober. It came back with zeroes across the board. Then we all had a drink, waited fifteen minutes and blew again. The results varied, but all were well within each others ranges. I am a very light drinker, in fact before embarking on this series I hadn’t had a beer in over a year, so I tend to bow out after the first. My friends continued the test, drinking, waiting and testing, and the end results where very similar to the S80. In fact, I do not know where they differ, I would need a much larger sample size, but from where I’m standing they are identical.

It is without a doubt a professional grade breathalyzer, and as such you can use it to verify your blood alcohol content, but please exercise caution. I realize that there is a legal limit fro drinking, but any amount of alcohol can impair your driving, even a little. A dulled reaction time can be fatal, so think carefully before you jump in the car. At the end of the day, you know you better than anyone.

If you know much about BACtrack’s products, and seen as you’re looking for a breathalyzer I have to assume you do, you know that a number of their devices come with a companion app. Rather than fitting a screen to the sensor they display and collate all your test data for you. The lack of one for the Trace is not a deal breaker, but it does reduce the utility of the device a little. The BACtrack Mobile might be the better option for those looking for a more long term monitoring experience.

The price is very attractive on this. To view the current discounted price on Amazon.com you can click here, and it comes with six mouthpieces and three batteries. I would recommend getting a few extra mouthpieces, as much like the novelty variants, when you take a breathalyzer out of your bag everyone is going to want a blow. Of the breathalyzer. I mentioned the pack of ten further up the page, but there is also a pack of fifty too which you can get for a fair bit cheaper here.

There is one simple question you must ask yourself before investing in a breathalyzer. Do you want a novelty or a serious tool. The risk inherent to buying one of these is that it makes you more confidant, when in reality they should be more of a peace of mind thing. If you want accuracy, get a Professinoal model. They aren’t that more expensive, usually triple the price. The Trace is an amazing option, it does all that you want it to do, and it is extremely cheap for what it is. Well worth it.