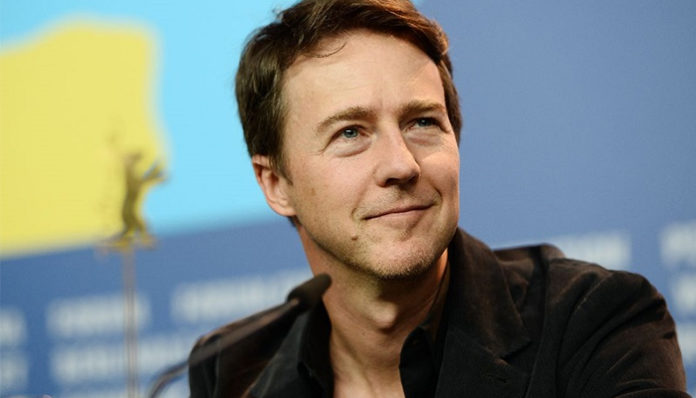 Ed Norton is an American actor who first gained recognition for his role as Aaron Stampler in the film, Primal Fear. An incredibly bright child, he decided that he wanted to pursue a career in acting when he was five years old. Going on to attend a number of acting classes, he soon took to the stage in the play, Annie Get Your Gun at the Columbia School for Theatrical Arts. Although he was only eight at the time, he is noted for having asked his drama teacher rather deep questions such as “What is my objective or motivation in this scene?”. Continuing to act into his teens and adolescent years, he took part in many college productions, many of which earned him campus-wide fame. After graduating and working briefly at his grandfather’s company in Japan, Norton made the decision to return to New York and devote his efforts entirely into acting. At the age of twenty six, the aspiring actor made his feature film debut in the crime drama, Primal Fear (1996).

A major box office success, the movie played a monumental part in the launching of Norton’s acting careerーalthough he started off as a fairly unknown actor, he ended up achieving international fame. A picture-perfect debut, his role in Primal Fear ultimately earned him a Golden Globe Award for “Best Supporting Actor in a Motion Picture” and an Academy Award nomination for “Best Supporting Actor”. With his career on the right track, Norton later starred in the films Everyone Says I Love You (1996), The People vs. Larry Flynt (1996), American History X (1999), and Fight Club (2000). Since he first took up the show biz lifestyle, Norton has accumulated over 40 acting credits to his name. A three-time Academy Award nominee, his on-screen performances have earned him many accolades over the years including a Screen Actors Guild Award, a Jupiter Award, a Golden Globe Award, a Gold Derby Award, amongst numerous others.

Besides his work in the entertainment circle, Norton is also a social and environmental activist. Aside from being a board member of Enterprise Community Partners, a non-profit organization dedicated towards providing affordable housing, he is also the president of the US branch of the Maasai Wilderness Conservation Trustーa group that aims to protect the wildlife and wilderness. Designated as the UN Goodwill Ambassador in 2010, Norton is also known for regularly raising money for various causes through the social networking website, Crowdrise. More recently in 2014, he was elected as the chairmen to a non-profit New York theater company.

So what has the award-winning actor been up to these days? Does he have any new upcoming films? What are some of his latest projects? What happened to Ed Norton? Where is he now in 2018? 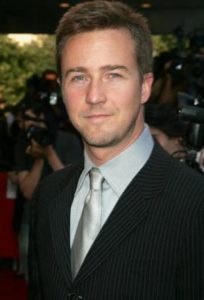 Born on August 18, 1969, in Boston, Massachusetts, Ed Horton (Birth Name: Edward Harrison Norton) is the son of Lydia Robinson, an English teacher, and Edward Mower Norton Jr., an environmental lawyer. The oldest out of three children, Norton grew up in the city of Columbia, Maryland with his siblings. When he was five years old, he watched his babysitter perform in the play, If I Were a Princessーit was ultimately that performance that inspired him to pursue a career in acting.

With his eyes set on becoming an actor, he was soon enrolled in a number of drama classes. From there, he eventually made his first on-stage appearance in a rendition of Annie Get Your Gun at the Columbia School for Theatrical Arts. When Norton was eight years old, he allegedly asked his acting instructor questions regarding scene motivation and objectivesーa rather peculiar question for a boy of his age.

As a teen, Norton went to Wilde Lake High School where he was a member of the basketball team; his classmates included best-selling novelist Robert Kolker and New York City council member, Mark Levine. Following his graduation, he went to Yale University where he studied history, Japanese and astronomy. During his time there, he also took part in a handful of college productions, many of which were met with campus-wide acclaim. After graduating in 1991 with his Bachelor’s degree, Norton relocated to Japan where he worked for the Enterprise Foundationーhis grandfather’s business and company. It wasn’t until three years later in 1994, that he made the decision to return to New York and dedicate his energy wholly to acting. 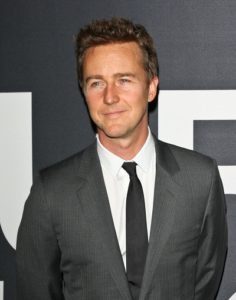 As he attended auditions in hopes of landing a role, Norton worked as a waiter on the side to support himself. Eventually landing himself a gig with the Off-Broadway Theater, the aspiring actor appeared in various plays including Italian American Reconciliation, Lovers, and Fragments. Around that same time, he showed up for an audition for the courtroom thriller, Primal Fear (1996). Impressing the casting directors with his acting and ability to improvise, he was eventually offered the supporting part in the film.

Adapted from a novel by William Diehl, Primal Fear told the story of a Chicago defence attorney who works to help prove the innocence of an altar boy, who has been accused of murdering an Archbishop. Released in theatres on April 3, 1996, the movie peaked at number one proved to be a box office hitーearning over $102 million, which is more than triple that of its production budget of $30 million. While actor Richard Gere portrayed the lead role of Martin Vail, Norton played the part of Aaron Stampler, the alter boy in question who has been accused of murder. Aside from the two, Primal Fear also featured Laura Linney, John Mahoney, Andrew Braugher, Frances McDormand and Alfre Woodard. Met with critical praise, the film served as a powerful debut for Norton, who was only just emerging from the unknowns at the time. For his convincing portrayal of Stampler, the actor was a Golden Globe Award for “Best Supporting Actor in a Motion Picture” in 1997. Despite having been released two decades ago, Primal Fear remains to be one of the actor’s best-remembered roles on the big screen.

Later that same year, Norton was also cast as a leading role in the biographical drama film, The People vs. Larry Flynt (1996). Directed by Milos Forman, it chronicled the life of Larry Flynt, a pornographic magazine editor and publisher who finds himself clashing with both the law and religious institutions. Featuring a screenplay by Larry Karaszewski and Scott Alexander, the film was released in theatres on December 25, 1996, after having premiered at the New York Film Festival earlier that year in October. Although it was a commercial flop, having only grossed a little over $20 million from a $35 million budget, The People vs. Larry Flynt was met with multiple praises from critics; it currently holds an overall rating of 87% on Rotten Tomatoes. Besides Norton, the movie’s cast list also featured Woody Harrelson, Richard Paul and Courtney Love. Praised for his performance, Nortonーwho played the character of Alan Isaacman, a young lawyer who befriends the lead protagonistーwas given multiple awards from the Los Angeles Film Critics Association, the Broadcast Film Critics Association, the National Society of Film Critics, amongst many others.

Two years later in the fall of 1998, Norton starred in the crime drama film, American History X alongside Edward Furlong, Fairuza Balk, Elliott Gould, Stacy Keach and Avery Brooks. Released that October, it depicted the story of two Los Angeles BrothersーDanny and Derek Vinyard, who become involved in the Neo Nazi movement; after the older of the two is sentenced to three years of prison for manslaughter, he is determined to prevent his brother from walking down the same path. A moderate success upon its theatrical release, American History X grossed over $156,000 in its opening weekend; it later went on to earn over $23.9 million worldwideーclose to $4 million more than its production budget of $20 million. Despite its mediocre commercial success, the film received rave reviews from critics, many commending it for its “compelling story” and “superb acting”. Lauded for his performance, Norton’s acting was included in Total Film Magazine’s list of “Greatest Film Performances of All Time”; it also earned the actor an Academy Award nomination for “Best Actor”.

More recently in 2014, the actor played the lead role of Mike Shiner in the black comedy film, Birdman or (The Unexpected Virtue of Ignorance). Also starring Michael Keaton, Amy Ryan, Zach Galifianakis, Andrea Riseborough, and Naomi Watts, the film followed the life of a faded Hollywood star, as he struggles to direct his Broadway debut over 20 years after his years of glory and fame. Upon its limited North America release, the art satirical grossed over $424,000 across four theatres in Los Angeles and New York. Following a nation-wide release that November, Birdman or (The Unexpected Virtue of Ignorance) went on to earn over $11 million during the opening weekend; it eventually reaped in over $103 million worldwide from a $16 million budgetーmaking it a commercial success. Universally acclaimed, the movie was applauded for its cinematography, screenplay and acting performances by the case. In 2015, it was listed in The Guardian’s list of “Top 50 Films of the Decade So Far”. The recipient of four Academy Awards, Norton also received a nomination for the “Best Supporting Actor” category. 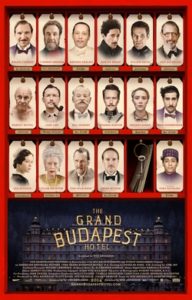 That same year, Norton also starred in Wes Anderson’s comedy, The Grand Budapest Hotel (2014), playing the role of Inspector Albert Henckels. Filmed in Germany, the movie featured a large ensemble cast that included Ralph Fiennes, F. Murray Abraham, Mathiew Amalric, Adrien Brody, Willem Dafoe, and Bill Muray, amongst many others. Upon its theatrical release in the United States on March 7, 2014, The Grand Budapest Hotelーwhich revolved around a concierge who tries to prove his own innocence after being accused of murderーquickly proved to be a hit amongst viewers, earning over $800,000 across four theatres during its first weekend. Supported by a four-star rating soundtrack, the film eventually went on to gross over $174 million worldwide. Overwhelmed with praise, The Grand Budapest Hotel earned Norton a Screen Actors Guild Award nomination, and a Critics’ Choice Movie Award nomination later that year.

This winter, Norton starred in the drama film, Collateral Beauty (2016) alongside Kate Winslet and Will Smith. Released in theatres on December 16, 2016, it told the story of a man named Howard (played by Smith) who begins writing to the deities of Time, Love and Death after suffering from a personal tragedy. In it, the actor portrays the role of a man named Whit; other members of the cast include Keira Knightley, Michael Pena, Naomie Harris, and Jacob Latimore.

Other than that, the actor will also be lending his voice to Wes Anderson’s upcoming stop-motion film. Tentatively set for a 2018 release, it will also feature the voice-over work of Bryan Cranston, Bill Murray, Jeff Goldblum and Bob Balaban.

If you’d like to stay up-to-date and connected with the Hollywood star, you can do so by following Ed Norton on social mediaー you can find him on Twitter at @EdwardNorton.