What Happened to Hilary Swank – What She’s Doing Now 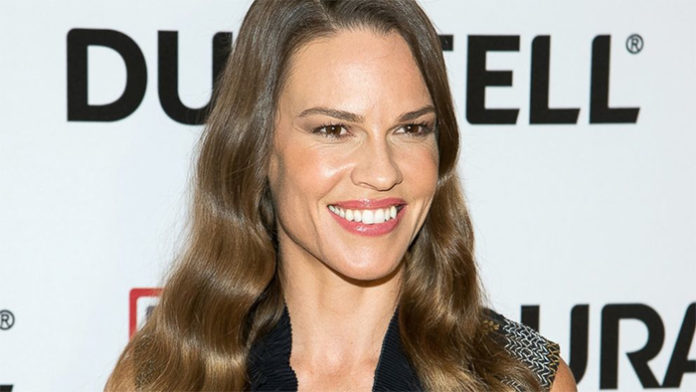 Beautiful and talented, Hilary Swank first gained recognition as an actress in the film, The Next Karate Kid (1994). Ever since she was eight years old, she knew that acting was something that she wanted to pursue in life. At the age of nine, the blonde made her first on-stage appearance in the children’s play, The Jungle Book. Despite having gone through a difficult childhood (she lived with her mother in their car at one point after the latter lost her job), Swank never gave up on her dreams. Pushing through the tough times, she later began putting herself out there in auditions. After many rejections, her hard work finally paid off when she landed a role in the television series, ABC TGIFーwhich also served as her official debut. Over the next couple of years, the aspiring actress continued to make small appearances in various shows including Harry and the Hendersons (1991), Evening Shade (1991), and Growing Pains (1992). When she was eighteen, Swank received her first role as a series regular in the comedy, Camp Wilder (1992) however it was ultimately cancelled after one season.

Four years after making her television debut, the blonde collided with a huge opportunity after winning the lead part in the feature film, The Next Karate Kid (1994). Her first time starring on the big screen, it offered her much widespread attention in the mid 90’s. Several other acting movie projects soon followed including Sometimes They Come Back…Again (1996), Kounterfeit (1996), Quiet Days in Hollywood (1997), and Heartwood (1998), although they were quite forgettable. Before the end of the decade, Swank received another big break when she was cast as the lead character in Kimberly Peirce’s Boys Don’t Cry (1999). Playing the role of a transgendered teen, she received critical acclaim for her performance and was later given an Academy Award for “Best Actress in a Leading Role” and a Golden Globe for “Best Performance by an Actress” later that year.

So what has the blonde beauty been up to in the recent years? Is she still regularly starring in films and on television? What are some of her latest projects? What happened to Hilary Swank? Where is she now in 2018? 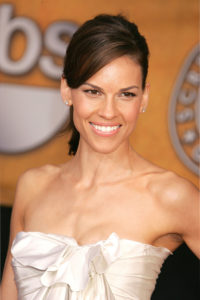 Born on July 30, 1974, in Lincoln, Nebraska, Hilary Swank is the daughter of Stephen Michael Swank and Judy Kay Clough, a travelling salesman and a secretary; the youngest out of two siblings, she has an older brother named Daniel and is of German, English, Scottish, Dutch, and Welsh descent. Growing up, Swan’s childhood was nothing short of difficult. When she was six years old, her parents divorced after having experienced a strained relationship for many years. Following their separation, she went to live in a trailer park with her mother and brother in Washington. An avid athlete, Swank was a competitive swimmer and was also talented in gymnasticsーhaving managed to ranked fifth in the state in the all-around. Her dreams however, was to become an actress.

Later relocating to Los Angeles with her mother, the two lived out of their car for a short period of time whilst trying to save up for an apartment. Extremely close with one another, Swank has cited her mother to be one of her life’s greatest inspirations. As a teen, the blonde went to South Pasadena High School; however she eventually dropped out due to a lack of interest. Focusing her attention entirely on acting, she soon began attending a number of auditions in her adolescent years. Although she didn’t have any professional experienceーhaving only acted in a children’s production of The Jungle Book when she was nine years oldーher hard work and perseverance ultimately paid off in 1990. That year, she landed her first television role in the comedy series, ABC TGIF; although it was fairly minor, it served all the same as her official acting debut. From there, Swank went on to appear in Harry and the Hendersons (1991), Evening Shade (1991), Growing Pains (1992). In 1992, she also broke out into the big screen in the film, Buffy the Vampire Slayer. 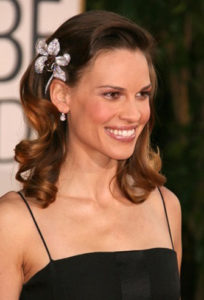 That same year, the actress also received her first lead role in the television series, Camp Wilder (1992). Created by Matthew Carlson, who also helped to write the story, it revolved around a young woman by the name of Ricky Wilder, who opens up her home to the friends of her siblings. In the show, Swank played the part of Danielleーone of said friends; other members of the cast included Mary Page Keller, Jerry O’ Connell, Meghan Haldeman, and Tina Majorino.

Premiered on ABC on September 18, 1992, Camp Wilder eventually earned the blonde a Young Artist Award nominationーher first recognition in the industryーfor the category of “Best Young Actress in a New Television Series” in 1993. Despite the notoriety that it garnered her however, the sitcom was later cancelled after nineteen episodes due to low viewership ratings; its twentieth episode remains to be unaired in the United States.

Following the end of the ABC series, Swank received a much deserved break when she was cast as the female lead in the drama film, The Next Karate Kid (1994). The fourth instalment of the franchise, it featured a screenplay written by Mark Lee and was released in theatres on September 9, 1994. Directed by Christopher Cain, it centred around a troubled, adolescent girl who later finds herself training under Mr. Miyagi.

Upon hitting the screens, The Next Karate Kid received many praises for its actingーhowever it proved to be a failure at the box office. A commercial flop, it only grossed $15.8 million from a $12 million budgetーmaking it the least successful film of The Karate Kid series. While veteran actor Noriyuki Morita reprised his role as Keisuke Miyagi in the movie, Swank portrayed the part of Julie Pierceーthe girl whom he eventually takes under his wing. Aside from the two actors, it also included appearances from Michael Ironside, Constance Towers, Chris Conrad, Michael Cavalieri and Walton Goggins. Despite the underwhelming performance of the movie however, it played a significant part in propelling the actress into fame. 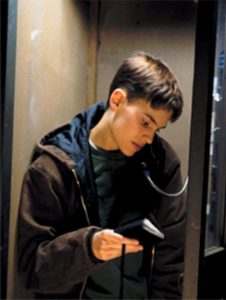 At the age of twenty five, the actress received an opportunity of a lifetime when she was offered a main role in the romantic drama film, Boys Don’t Cry (1999). Perhaps one of her most well remembered portrayals, it starred Swank as a young trans man who becomes the target of brutal hate crime in Nebraska. Released in theatres on October 8, 1999, the movie also starred Chloe Sevigny, Peter Sarsgaard and Brendan Sexton III as Lana Tisdel, John Lotter and Marvin Nissen respectively.

Lauded by critics for its depiction of a sensitive subject matter, Boys Don’t Cry was considered by many to be one of the best films of the year. Based on the real life story of Brandon Teena, it received over thirty industry awardsーa handful of which went to Swank. For her stunning portrayal of the transgendered teen, she received an Academy Award for “Best Actress” later that year.

In the winter of 2000, Swank starred in Sam Raimi’s supernatural thriller film, The Gift. Written by Tom Epperson and Billy Bob Thornton, the movie was based on the alleged psychic experiences of Thornton’s mother. Opened in theatres on December 22, 2000, it focused on a woman known as Annie, who uses her abilities of extrasensory perception to help crack down on a murder case. While actress Cate Blanchett portrayed the role of Annabelle Wilson, Swank played the part of a character named Valerie Barksdaleーa woman who constantly finds herself bing threatened by her violent husband; other starring members of the cast include Giovanni Ribisi, Katie Holmes, Greg Kinnear, Michael Jeter, Kim Dickens and Gary Cole. Favourably received, The Gift won many awards and eventually grossed over $12 million at the US box office. By the end of its theatrical run, it had earned over $44.6 millionーover four times that of its production budget of $10 million.  Although the film didn’t garner Swank any awards, it did earn her a Saturn Award nomination for “Best Supporting Actress”.

Four years later, she worked with director Clint Eastwood in the sports drama film, Million Dollar Baby (2004). Featuring a screenplay by Paul Haggis, who also starred in the movie, it centred around an aspiring boxer named Margaret Fitzgerald (played by Swank), who undergoes training with a trainer in attempts of one day becoming a professional boxer. Initially opened in just eight theatres, Million Dollar Baby later enjoyed a nation-wide release on December 15, 2004. Met with critical acclaim, it grossed more than $12 million over its opening weekend and quickly rose to the number one spot at the box office.

By the end of its six-and-a-half theatrical run, it had raked in over $216 millionーmaking it a massive commercial success. Deemed as a masterpiece by many viewers, it was named as the best film of 2014 by the Chicago Sun Times. Praised for its powerful storyline and characters, it currently holds an impressive 91% rating on Rotten Tomatoes. Presented with an Academy Award for “Best Picture” the following year, it also gave Swank an Oscar Award for the “Best Actress” category.

What is Hilary Swank Doing Now in 2018 – News and Updates 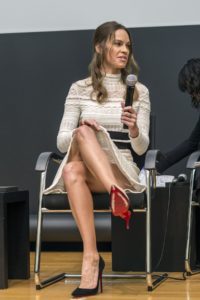 Although the actress seemed to have taken a bit of a break from acting in 2016, she will be making her return in a handful of movies this upcoming yearーone of which includes the comedy, Logan Lucky (2017). Filmed under the direction of Steven Soderberg, its plot will revolve around a couple of brothers who plan a heist during a NASCAR event. Currently set to be released on October 13, 2017, it will also be featuring actors Channing Tatum, Daniel Craig, Adam Driver and Katherine Waterson.

Aside from live-action acting, Swank will also be starring in a voice-over role in the animated film, Spark (2017), which is scheduled to be released on April 14, 2017. Following the life of an anthropomorphic teenage monkey, Spark premiered at the Toronto Animation Arts Festival International in the spring of 2016.

If you’d like to stay up-to-date and connected with the blonde beauty, you can do so by following her on social mediaー you can find Hilary Swank on Twitter or Instagram at @hilaryswank.