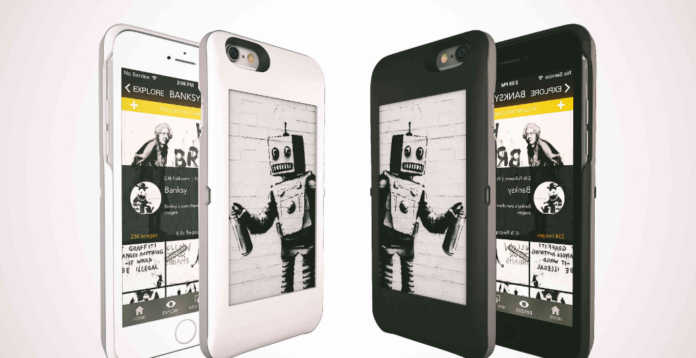 Yashar Behzadi was tired of unlocking his phone over a hundred and fifty times a day. He thought that using your smartphone to get information could be a lot more efficient. He figured that they could streamline the process by doing the work for the user themselves. He also realized that the back of smartphones we’re going virtually unused. Yashar combined the two ideas, and the popSLATE was created.Before appearing on Shark Tank, the entrepreneur behind popSLATE started an Indiegogo campaign. The campaign raised an impressive million dollars in March of 2016. Will the Sharks see these results, and invest in this Innovative new product? Let’s take a look. 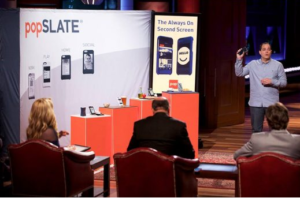 Yashar Behzadi walked out onto the stage, and into the Shark Tank. He introduced himself as the CEO and co-founder of his company popSLATE. He requested an investment of $500,000 in exchange for 5% equity stake in his business. He claimed that popSLATE would help the shark say a whole other side of their smartphone. He argues that everyone had one, and the smartphone was everyone’s most prized possession. He gestured towards the back of his iPhone and said that the back of it did nothing. He claims that it’s a tremendous piece of real estate that was currently unclaimed. He stated that popSLATE would transform the back of the phone into an always-on second screen.

He claimed that the always-on screen would allow the consumer to have instant access to everything they wanted. Those features included calendars, to-do list, recipes, Maps, and text messages. All those features would be available at a glance. He claimed that you would never again have to fumble around for your boarding pass. Yashar said that it was the 24/7 feed of information that you want whether it’s news or your favorite sports updates. Yashar finished his presentation by asking the sharks who wanted to help him bring the popSLATE to the back of everyone’s smartphone.

Robert asked what happened to the front screen of the phone. Yashar explained that it remained completely off, which allowed the customer to go without unlocking it while still getting vital pieces of information. Lori asked for samples, and Yashar went behind his display to grab them for her. Robert asked if it could function as a dual screen, and Yashar said that you could have both on at the same time. Yashar passed out samples to each of the sharks. Each sample featured a picture of the shark. Yashar et them know that by pressing a button on the side of the popSLATE, they could cycle through different images, including the Sharks favorite quotes.

Ashton Kutcher, who is the guest shark on the show, asked how the popSLATE worked. Yashar let him know that it was an e-paper screen. That technology allowed it to be super low power, while also being readable. The popSLATE connected wirelessly to the phone. Ashton clarified that you set everything up on the front sides applications, and that’s what delivered it to the popSLATE. Yashar confirmed that that was the case. Robert wanted to know what made the popSLATE valuable to the consumer. Yashar said that it saves the customer time, and everyone on the Shark Tank knew that time was money. Mark asked how much he was selling the popSLATE for, and Yashar told him that they were retailing for $129. Mark followed up by asking him how much it cost to make, and he told them that it was in the $80 price point Yashar hastily said that they had received quotes for $41 from the manufacturer if they are ordering bulk.

Lori asked him how much the tooling cost for each phone. Yashar let her know that it was $51,000 for each cycle. Lori looked shocked and told him that figuring out production for each different kind of phone would be expensive. Yashar told her that they were focusing on Apple products and the iOS at the moment. Kevin asked how much money they had lost in the production of the popSLATE. Yashar told him that they had spent 1.9 million dollars and development. Kevin followed up by asking him how soon they thought they would break even. Yashar said that they would be cash flow positive in July of next year.

Robert said that he love technology, and had been in the technology business for a long time. He stated that it was a beautiful design, and stated that he thought the technology would be more adaptable to wearables. Yashar indicated that he didn’t see himself competing with the wearables. He stated that the wearables we’re good for small pieces of information such as text messages, but for anything bigger, it was a terrible user experience. Mark jokingly said that Dick Tracy would argue with him. Robert went out, saying that he still thought that everything the popSLATE did could be served by a wearable.

Mark told Yashar that the lock screen was really his competition, not the wearable. Lock screens on phones were becoming more and more powerful. Notifications are getting stronger, and people were using a lot of screams for more and more things. He needed to come up with something more exciting, and the popSLATE had the potential to be that. Mark mentions that the popSLATE had the potential to bring up the pictures of friends that you walked into a party with, or something like that. Yashar said that they would be able to build something that was to that point. He said that the significant advantage of the popSLATE is that the screen is always on which would be used to serve information. He said that it could be utilized as a Mavericks game to help relevant information as the match is going on, or if it’s walking into a store and getting a coupon. Mark continued, saying that it’s a very binary space and popSLATE would have to be configured to win.

Kevin said that it was a land grab for the accessory, so they would be left with what remains after that. Ashton pointed out that if the smartphone’s decided to put out their own second screen. Kevin said that he thought that we’re headed in that direction. Ashton stated that the main problem would be battery life. Kevin tried to tell them that the popSLATE would have a battery issue as well, but Ashton pointed out that the battery life for an e-reader was much longer than a standard smartphone. Kevin said that they were still debating the direction of the business, and they hadn’t even touched the valuation. He said that the Sharks didn’t agree, and that made the business risky. He didn’t think that the risk-reward was there for him, and he went out.

Lori asked Yashar what he was doing to drive the price down. HR and said that he was trying to be lower priced, and he said that the Sweet Spot would be $99. Lori stated that she’d sold millions of dollars worth of cell phone cases. She called it a great market, and something that was growing and growing. She said that the downside is that they would never be catching up because cell phones were always getting bigger and bigger, a new one were coming in every year. So just as you get inventory in, the market would be changing, and you have to come up with something else. She pointed out that the tooling is extremely expensive for each production. Lori went out.

Yashar let her know that he appreciate what she was trying to say, and new the top so it was very early in production. Kevin pointed out that he had two sharks left. Ashton stated that he liked the platform, and the software side was the most compelling point because they have the ability to use Bluetooth to actually broadcast whatever they wanted to program into the application. He’s afraid that they had a dependency on Apple because they are only working with iOS right now. He also said that the price point was too high, and he couldn’t get over those hurdles. He went out.

Mark said that IOS was just going to keep on improving its design, allowing the lock screen to get smarter and adding multi-window capability. He didn’t think that popSLATE became as critical or as compelling. Mark one out. Mark was the last shark standing, so the presentation was over. Robert said that Yashar did an excellent job of explaining what his product was. Yashar stated that he understood, and then he was still very early in this space. He thought the Sharks for their time and said that it’s been wonderful. As he walked off stage, he stated that he was disappointed that he didn’t get the money but appreciated the opportunity to talk about his product. Back on the Shark Tank, Kevin looked down at his popSLATE with the picture on it and said it was a damn good-looking case. Lori rolled her eyes. Let’s see how popSLATE did without getting a deal from the Sharks.

PopSLATE Now in 2018 – The After Shark Tank Update 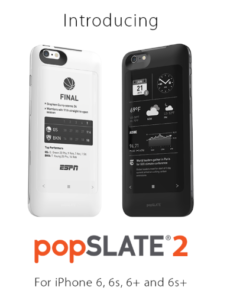 Did the Sharks make a mistake by not investing in the popSLATE? Since the Shark Tank appearance, popSLATE has gone under heavy renovations. There is a new second screen available called the popSLATE 2, which was entirely funded by Indiegogo. The product appears more interactive and has more available features. They did over a million dollars in pre-sales. In addition to the second screen, the popSLATE 2 is also a battery case that charges your iPhone while it’s in use. It also has a cheaper price point, being introduced at just $99. Other news features include a customizable dashboard, real-time notifications, an easy access wallet that allows you to use gift cards or discount cards, as well as an e-reader that lets you read books from the back of your phone. The popSLATE two also allows you to charge both the phone and the case at the same time. The newsfeed auto updates, which allows you to enjoy full-screen headlines and summaries throughout the day, and you get to pick the sources of that. It looks like the Sharks really missed out on investing and a popular product.