Whether you know her from Friends or Cougar Town, you are probably at least mildly familiar with Courteney Cox. She is known for being a top-tier television actress, but she has also cultivated something of a career for herself as a film actress, too, being particularly well-known for her work in movies like Scream 3. However, since Cougar Town‘s cancellation in 2015, Cox hasn’t really had any major roles. Has she finally decided to “act her age” and quit acting altogether? Or is she working on some other project? In this article, I’m going to be talking about how Courteney Cox was able to rise to prominence in television, and provide her fans with an update as to where she has been taking her career in more recent years. Without further delay, let’s see what has been going on with this Birmingham-based actress. 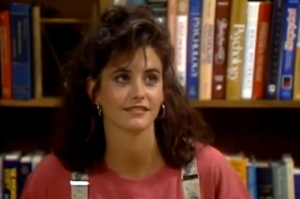 Courteney Bass Cox was born in Birmingham, Alabama in June of 1964. Growing up, Cos attended Mountain Brook High School in Birmingham. When she graduated, she decided to pursue a college education in Washington D.C., attending Mount Vernon College. At the time, she was looking to study architecture. However, before she had a chance to complete her class work, Courteney decided that she wanted to drop out of college and pursue a career in acting and modelling. Her first major gig came in 1984, when she appeared in the music video for “Dancing in the Dark”, a Bruce Springsteen song. She received her first major television role in 1985, when she given a part in the NBC series Misfits of Science. The show ended up being cancelled due to low ratings, however, and so nothing ever really came of it. It could be argued that her first “big break” came when she earned a recurring role in the hit show Family Ties, where she played Michael J. Fox’s girlfriend.

During this time, Courteney also made small appearances in various films, like Masters of the Universe, I’ll Be Home for Christmas, Cocoon: The Return, and Mr. Destiny. None of these roles were particularly “big” so to speak, but they helped Cox acquire a certain level of exposure that she probably wouldn’t have been able to acquire otherwise. Ironically, she received one of her largest film roles just a short while before her career exploded in 1994. She had a more prominent role in the movie Ace Ventura: Pet Detective, which was a complete box office hit. Outside of that role, she was also featured as a guest star on an episode of the wildly popular sitcom Seinfeld, where she played Jerry Seinfeld’s girlfriend. Later that same year, she was given the opportunity to audition for a major part in an upcoming sitcom, called Friends. During this audition, Cox tried out for the role of Rachel Green. Little did she know, this audition would change her life forever.

Courteney Cox, Friends, and Beyond 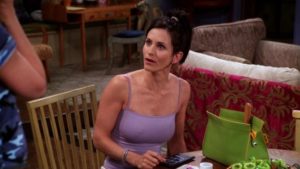 Although Courteney was not ultimately cast as Rachel Green, she was still given a slot on the main cast as Monica Geller. On Friends, Cox was slated to perform alongside the likes of Jennifer Aniston, Lisa Kudrow, Matthew Perry, David Schwimmer, and Matt LeBlanc. At the time of the series’s premiere, Cox was actually the most famous actress on the show’s bill. Although she certainly wasn’t some A-list actress, she definitely seemed like one next to her co-stars, who were relative unknowns. As you probably already know, Friends became a sensation, and today, Monica Geller is widely thought to be Courteney’s most iconic role. However, she didn’t just settle with being popular on that program. While she was working on Friends, which aired through 2004, she also appeared in big budget movies like Scream, Scream 2, and Scream 3. In these movies, she played Gale Weathers, a reporter. Her performance in the Scream franchise has been critically lauded over the years, with her being nominated for a wide variety of different awards for her outstanding work.

When Friends ended in 2004, Cox made sure to not remain complacent. Her co-star Jennifer Aniston, in particular, was able to build a very good career for herself following the show’s conclusion. Initially, Cox was offered a lead role in the upcoming show Desperate Housewives, which would have made for another long-term, iconic role for the actress. However, she had no choice but to turn the role down because she was pregnant at the time that it was offered. Over the years, Cox dabbled in various films, big and small. She had roles in movies like November, Zoom, The Longest Yard, and she even tried her hand in voice acting for the animated film Barnyard. Cox saw another starring role in 2007, when she worked on the FX program Dirt, which she produced along with her then-husband David Arquette. Unfortunately, this series ended up being cancelled after its second season, and the storied actress was back to finding her next big role. 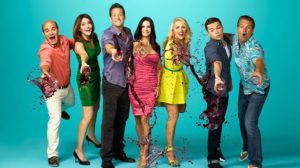 Luckily, that next big role presented itself in a fairly timely fashion. In 2009, the show Cougar Town aired, and Courteney was set to star. The show is definitely different from Friends, despite also being a situational comedy. Cougar Town follows the lives of recently divorced, older women as they find themselves in various humorous situations in their personal lives. Unlike some of Courteney’s previous stints into acting after Friends, this show was actually very well-received. It originally aired on CBS for its first three seasons, and its final three seasons were picked up by TBS. Courteney held the starring role on the program, but starting in the series’s later seasons, she also started to direct a lot of episodes. Cougar Town was very popular among many different audiences, and it was able to last for six seasons before the producers decided to wind things down. The show ended back in 2015. Cougar Town was kind of Courteney’s biggest gig for a while, so what is she doing now that it’s over? Where is she now?

Since Courteney Cox ended in 2016, it seems like Cox has turned her attention to more subtle aspects of the entertainment industry. Earlier in 2016, she appeared on an episode of Running Wild with Bear Grylls, a show that involves celebrities joining survivalist Bear Grylls on an outdoor adventure. She also appeared in an independent film called Mothers and Daughters, a movie directed by Paul Duddridge. Although she may not be on your television screens as Monica Geller every week, but she definitely has not retired from acting altogether.