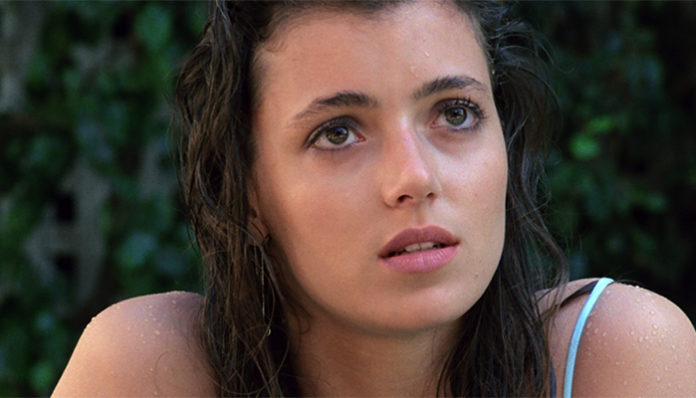 New York actress Mia Sara is best known for her portrayal of Sloane Peterson in the comedy, Ferris Buellers’ Day Off (1986). The daughter of an artist, she began her career in the show business earlyーwhile she was still a grade schooler, she started acting in various television commercials. At the age of fifteen, she made her small screen debut in the daytime soap, All My Children (1982), playing a small recurring character. The following year, she co-starred in the Academy Award-nominated adventure film, Legend (1985) alongside Tom Cruise and Tim Curry. Continuing with her career as a young star, Sara soon became a part of the John Hughes’ Ferris Bueller’s Day Off in 1986, portraying the role of the title character’s girlfriend. A smash hit, it quickly launched the aspiring actress into celebrity fame. From there, she appeared in a number of smilers films including Apprentice to Murder (1988), By the Sword (1991), A Stranger Among Us (1992), Caroline at Midnight (1994), and Timecop (1994)ーthe last of which earned her a Saturn Award for “Best Supporting Actress” in 1995.

Over the next few years, Sara appeared in a handful of movies such as The Set Up (1995), Black Day Blue Night (1995), The Pompatus of Love (1995), and The Maddening (1996). The actress then took a short three year break away from the big screen prior to returning in Dazzle (1999). Shortly after  the new millennium, she lent her voice to a character in the animated feature, Little Insects (2000). Since then, she has starred in Turn of Faith (2003), Hoodlum & Son (2003), and Dorothy and the Witches of Oz (2012). Her latest appearance was in director Juliana Sorelli’s comedy short, Pretty Pretty back in 2013. Despite all of the projects that she’s taken apart of throughout her career however, her part in Ferris Bueller’s Day Offーover three decades agoーremains to be her most well remembered portrayal on film.

Aside from her work in Hollywood, Sara has also appeared in numerous television projects. In 1987, she made her small screen debut in the mini-series, Queenie alongside Joss Ackland, Sarah Miles and Serena Gordon. Eventually branching out into TV movies, she starred in Big Time(1989), Daughter of Darkness (1990), Blindsided (1993), Bullet to Beijing (1995), Midnight at Saint Petersburg (1996), and Hard Time (1998), amongst others. In 2002, she was also cast as one of the lead characters in The WB drama series, Birds of prey where she played the role of Harley Quinn. From there, she went on to appear in CSI: NY (2005), Nightmares & Dreamscapes (2006), Tinseltown (2007), and The Witches of Oz (2011)ーthe last of which was also her last television appearance.

So what has the actress been up to since the early 2010’s? Has she retired from the show business for good? What new endeavors has she taken on? What happened to Mia Sara? Where is she now in 2018? 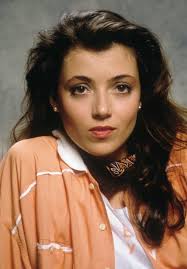 Born on June 19, 1967, in Brooklyn Heights, New York, Mia Sara (Birth Name: Mia Sarapociello) is the daughter of Jerome and Diana Sarapochiello, an artist and a stylistーthey both also worked as photographers. The oldest out of two children, she has a younger sister named Cassie. Growing up, she went to St. Ann’s School in Brooklynーwhich served as both an elementary and high school; she later graduated in 1985. Like many actresses, Sara started her career in the show business early. At the age of thirteen, she began attending a number of television auditions; dazzling with her charm and good looks, it didn’t take long for Sara to land a handful of commercial gigs while still in high school. A natural performer, she even starred in a school production of A Midsummer Night’s Dream as a teen.

Shortly after her high school graduation, the aspiring actress made her professional debut in the romance film, Legend (1985)ーit was also her first time making an appearance on the big screen. Just a year later, Sara received a breakthrough with the comedy, Ferris Bueller’s Day Off (1986) in which she was cast as one of the main leads.

Working alongside director John Hughes, the eighteen year old was joined on set by actors Alan Ruck and Matthew Broderick. In the film, Sara starred as Sloane Petersonーthe girlfriend of the title character, Ferris Bueller (played by Broderick); she later joins him and his friends on a sightseeing trip to Chicago after they unanimously decide to skip school. Much to their dismay however, they group soon find themselves into trouble after destroying Ferris’ father’s prized 1961 Ferrari. Released in theatres on June 11, 1986, Ferris Bueller’s Day Off proved to be a major commercial hitーupon its screening, it grossed over $6.2 million in its opening weekend, taking the number two spot at the box office. The tenth highest-earning film of its year, it later went on to earn over $70 million domestically.

Despite the fact that it was Sara’s first major on-screen role, the critically acclaimed comedy earned her much recognition and applause. To date, it remains to be one of the actress’ best remembered portrayals of her career. Hailed as one of the “Top 100 Funniest Movies” by Bravo Magazine, Ferris Bueller’s Day Off ultimately received rave reviews from criticsーmany of whom lauded it for its genuinely funny script and brilliant casting. Deemed as the number one teen film of all time by Empire Magazine, the movie has since become a loved classic. Considering its popularity, it’s almost not surprising that a spinoff television series was created in 1990. 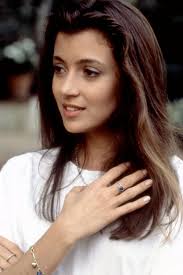 Two years later, Sara landed another lead role in the drama thriller, Shadows in the Storm (1988). Directed by Terrell Tannen, it revolved around a businessman by the name of Thelonious Pitt (played by Ned Beatty), who meets a beautiful young lady during his travels in California’s Redwood Forestsーhe is most surprised by the fact that she looks exactly like the woman whom he’s been seeing in his dreams. In the film, the actress portrayed none other than the female in question, Melanie. As the movie progresses, it is revealed that she is actually already married to an individual.

Originally premiered in Portugal on February 16, 1990, Shadows in the Storm was unfortunately, mostly met with negative reviews. Despite its varied cast, which also consisted of Michael Madsen, Donna Mitchell, James Widdoes, and Joe Dorsey, he film was not well receivedーeven after it was released in the United States a month later. Although viewers acknowledged its potential, its one dimensional characters and underwhelming plot proved to be disappointing. Shadows in the Storm currently holds a subpar rating of 3.0/10 on IMdb.

After playing various roles in a series of small films, Sara appeared in the sports action movie, By the Sword in 1991. The first motion picture about fencing, it saw the actress in the role of Erin Clavelli, while actors F. Murray Abraham and Eric Roberts played the two starring characters of Suba and Villard respectively. Other members of the cast include Chris Rydell, Elaine Kagan, and Brett Cullen.

Premiered on October 7, 1991 at the Vancouver International Film Festival, By the Swordーwhich currently holds a 6.4/10 rating on IMdbーwas later released in Los Angeles on September 24, 1993. The movie later managed to gross over $6000 across nine screens that fall. Like many motion pictures, opinions for the film was mostly splitーwhile some panned the production for its overdone plot and poor screenplay, others expressed appreciation for its action sequences and acting. 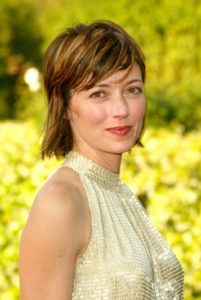 In 1994, Sara finally had the chance to star in a major box office hitーa sci-fi film by the title of Timecop. Set in a period where time travel exists (and is often used for illicit activities), Timecop revolved around a security agency officer, Max Walker, who goes against a shady senator who has plans of controlling the future by changing the past. Based on a story created by Mike Richardson, who also helped to write the movie, it featured the actress as Melissa Walkerーthe wife of main protagonist, Max Walker. As the plot progresses, she is eventually taken hostage by the politician in question, a man by the name of Aaron McComb (played by Ron Silver).

Released in theatres on September 16, 1994, Timecop was a commercial success. During its opening weekend, it reached number one and earned over $12 million in ticket sales; it later grossed another $8.1 million in its second week. By the end of its run, it had taken in more than $101 million worldwide from a production budget of just $27 million. Despite being a financial hit however, Timecop received mainly mixed reviews from criticsーfor instance, many pointed out the film’s inconsistencies and plot holes. Nonetheless, the action crime movie earned the actress a Saturn Award for “Best Supporting Actress” in 1995.

Two years after the new millennium, Sara secured her first lead role on television in the drama series, Birds of Prey (2002). Created by Laeta Kalogridis, it loosely follows a DC comic of the same title, which is set in Gotham City. Playing the part of a starring character, the actress portrayed the role of Dr. Harleen Quinzelーa psychiatrist whom takes the case of Helena (another one of the show’s main cast); it is later revealed that the doctor has in fact, come to the city looking for vengeance. Aside from Sara, Birds of Prey also featured Ashley Scott, Dina Meyer, Rachel Skarsten, and Shemar Moore.

Originally premiered on The WB on October 9, 2002, the drama series was successful at attracting over 7.6 million audience members to their screens during its debut. In spite of that however, the ratings eventually declined sharply with the subsequent episodes. Due to low viewership, Birds of Prey was ultimately cancelled after a single season; its thirteenth and final episode aired on February 19, 2003.

Looking back at Sara’s filmography, Birds of Prey was the only television series that the actress took part in as a main leadーher other small screen projects had mostly been that of TV films, although she has guest appeared in a handful of shows such as Time Trax (1993), Chicago Hope (1995), Jack and the Beanstalk (2001), and CSI: NY (2005).

It’s no secret that the star of Ferris Bueller’s Day Off has taken a back seat in actingーher last involvement in the show business was back in 2013 when she appeared in the film short, Pretty Pretty. If we’re talking about full-length motion pictures, her last appearance was in that of Dorothy and the Witches of Oz in 2012! Where has she gone?

According to reports, Sara has been living in semi-retirement since the early 2010’sーwhich makes sense considering her lack of television and movie involvement in the recent years. Seeing how she has a daughter who was born in 2005, it can only be assumed that she’s been spending more time with her child and husband, fellow actor Brian Henson, now that she’s shied away from the cameras. Will Sara be making a comeback anytime soon? Only time can tell.

Stay tunedー if she ever does decide to return to show business, you’ll be one of the first ones to know about it.