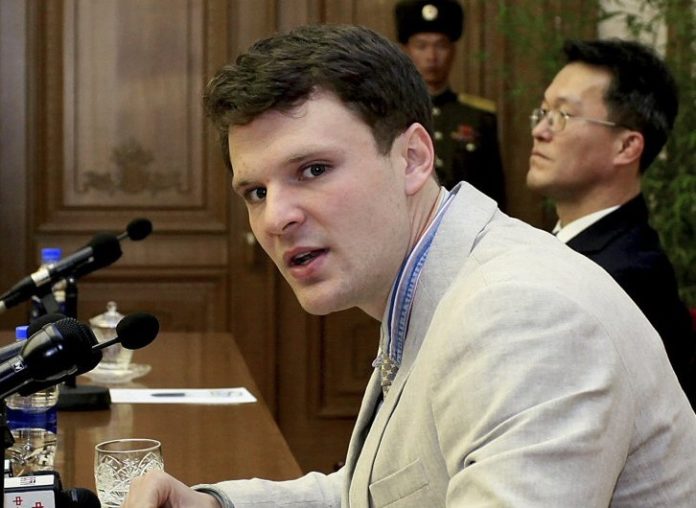 Most of us at one time or another have done something just a little reckless in order to win a friendly bet, it’s a common situation and in the vast majority of cases no real harm is done, it’s just a bit of fun, isn’t it? Unfortunately for 22 year old Otto Warmbier the consequences of a small and apparently harmless prank have led him into an unimaginable nightmare from which there appears to be no early escape.

Otto Frederick Warmbier was born on December 12th 1994 in Cincinnati, Ohio and lived a typical and ordinary life. He attended Wyoming High School where he played varsity soccer and eventually graduated as Salutorian in 2013. After High School Otto continued his education at the University of Virginia, where he was studying for a double major degree in economics and commerce.

Like many other young people working hard towards a better future Otto decided to take a quick break just after Christmas 2015, and although that in itself was not unusual, Otto’s choice of vacation destination was. He booked a five day break to North Korea through a Chinese based independent travel operator called Young Pioneer Tours, who promoted their tours as budget travel to ‘Destinations your mother would rather you stayed away from’.

During his brief time in North Korea Otto, who was part of a tour group that included ten other US citizens, behaved in a typical tourist like fashion in the secretive and repressive country. He took pictures, was respectful to the Korean ‘guides’ who accompany all foreign visitors and seemed to be just like many of the other 6,000 Westerners who visit the country each year. His tour group was accommodated in the Yanggakdo International Hotel, which is in the center of Pyongyang, but it also happens to be conveniently cut-off from the city due to being on an island in the middle of the Taedong river, which cuts through the center of the nations capital city, thereby making it impossible for tourists to wander off unaccompanied by their ever-watchful guides.

At the end of the five day trip and with no indication that anything was wrong, the tour group headed off to Pyongyang airport on January 1st 2016. When Otto’s group checked in at the newly renovated airport everything went smoothly until it was his turn, when he was taken to one side and escorted into a small immigration office by two airport officials. It’s perhaps unclear how much of this information would have ever been made public if it wasn’t for the presence of Charlotte Guttridge, a tour leader for Young Pioneer Tours at the scene. She waited for Otto to return from his unexpected interview until it became clear that he wasn’t going to be coming back. Still responsible for the other members of her group Charlotte had no choice but to board the plane herself, where she was informed by an airport official shortly before take-off that Otto Warmbier had been taken to hospital.

Shortly afterwards a message was passed to the founder of Young Pioneer Tours, Gareth Johnson, who was in Pyongyang with a different tour group preparing to leave the country by train. Johnson decided to stay in the country to establish exactly what was happening with Otto. He co-ordinated communications between Otto’s family, North Korean officials and the Swedish embassy in Pyongyang, which represents American Interests in the country.

In March 2016 the official news agency of North Korea released an 18 second low quality video which appeared to show Otto removing a propaganda sign from the wall of a staff only floor in the Yanggakdo hotel, he then seems to place the sign on the floor, by then Otto had admitted to stealing the sign in order to take it back home to the states as a souvenir, but of course the North Koreans saw his actions as far more serious, they considered Otto guilty of an ‘act of hostility against the state’, due to the fact that the sign displayed a quotation by Kim Jong-Il, and as Otto was American the rogue state were determined to make an example of him.

Seasoned diplomat and former US ambassador to the UN, Bill Richardson met with North Korean officials to request for Otto’s release but to no avail. On March 16th Otto was sentenced to 15 years of hard labor, and a somewhat contrived confession was released in which Otto begged for forgiveness from the North Korean authorities and citizens. The unexpectedly harsh sentence reduced Otto to tears in the court in a heartbreaking clip of the culmination of the proceedings. The entire ‘trial’ from beginning to end had taken place in less than an hour and the resulting verdict surprised no-one, with the exception of Otto

Just one day after Otto’s trial and unnecessarily harsh sentence, President Obama issued ‘robust’ new sanctions against North Korea, although White house spokesman Josh Earnest was adamant that they were only due to North Korea’s recent nuclear tests, and their imposition so soon after Otto’s sentence were coincidental. Whatever the reasons for the sanctions, many international agencies were quick to condemn Otto’s punishment as ‘inhumane’ and ‘cruel’, and the trial, which lasted for just one hour as nothing but but a political show of hostility to the US government. Human Rights Watch called the trial and it’s eventual result ‘outrageous’ and ‘shocking’ and the US state department insisted the harsh sentence was imposed for purely ‘political purposes’.

On January 2nd 2017 Otto Warmbier completed one full year of captivity, and new information about the young Cincinnati native has not been easy for US officials to gather. It’s clear that the next 14 years of Otto Warmbier’s life are uncertain and that he has become a pawn in the ongoing political tension between North Korea and the free World. President Obama’s slow-paced campaign of flooding North Korea with information about the rest of the World, in order to eventually foster a more tolerant regime will be unlikely to yield any results before his time in office ends, so it will likely fall to his successor, President elect Donald Trump to resolve the Otto Warmbier situation during his next four years in office.

The history of American captives in North Korea suggests the secretive and rogue state of North Korea may well hold out until senior US officials and/or statesmen visit the country to bargain for Otto’s release, as was the case in November 2014, when US intelligence chief James Clapper visited Pyongyang and successfully arranged the release of Matthew Miller, guilty of ripping up his visa upon entering North Korea, and Korean-American missionary Kenneth Bae, who had been a prisoner in the country for over two years.

Bill Richardson once again visited North Korea in September 2016 to discuss Otto’s release, and although his private delegation released a statement confirming that Otto was being treated fairly, no other details were forthcoming other than the talks had been ‘promising’. The best hope for Otto’s early release is that the North Koreans will attempt to use him as a bargaining chip in negotiations with the new administration of Donald Trump, although for now the fate of a young man, guilty of nothing more than a completely harmless prank, lies entirely in the hands of politicians, the diplomatic efforts of Bill Richardson and other negotiators, and most of all in the political machinations of North Korea and it’s unbalanced despotic leader, Kim Jong-Un.