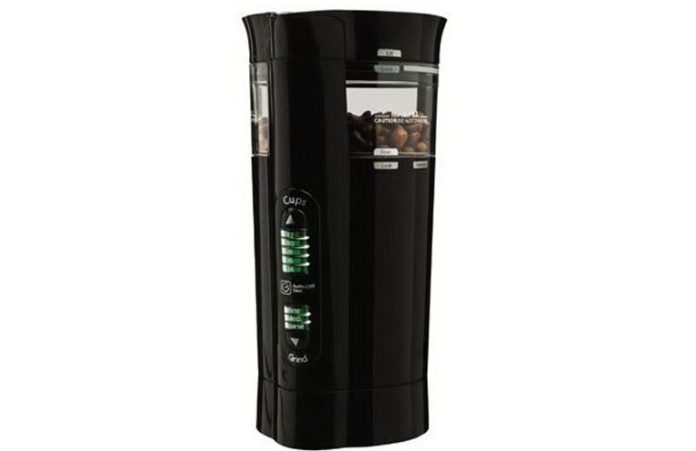 Moving on from last weeks excellent Cuisinart build, we come to the third most popular build on Amazon, the Mr Coffee Electric Grinder. Mr Coffee is a well known brand, though best known to me via Spaceballs the movie. They make all manner of coffee related machines, and while I cannot vouch for their quality, i can at least say that their electric grinder is a top notch machine.

All cards on the table, I do not drink coffee. It’s an acquired taste that I never acquired. I get my caffeine from other places. But I did work in a cafe for a number of years, and am an old hand when it comes to crafting espresso based drinks. I was particularly proud of my mocha. these days I make stove top espressos for my partner, so it is to her to determine the quality of the ground beans in these reviews.  Moka pots, the name of the stove top coffee pot I use, are fantastic alternatives to the very pricey actual espresso machines, I’ll talk about them later in the review.

While Mr Coffee don’t focus their advertising this this direction, home grinders can be used for a wide variety of things. Including making fresh spice rubs. that is an area that I am well versed in, and I test the effectiveness of every grinder in the food prep department. Most do quite well, for the 5 grinders I have reviewed all have performed more or less equally in that department, so I do not weigh it all that heavily in my recommendation.

Last week i tested the Cuisinart Supreme, and the quality on offer was leagues ahead of most other grinders. The use of a Burr grinder is always good to see, and a bit of a must have for the aficionados. Not to say that a blade build isn’t good, but there are contexts fro their use. the Mr Coffee electric grinder is a blade build, but at this price it is hard to say no to it.

As with the previous blade based builds I have reviewed I will be testing the grind based on time spent. With the Mr Coffee I don’t actually have to time it myself, they have grain gradient settings built in, but it amounts to the same thing. Coarse, Medium and fine, with a cup for each.

So let’s get to grinding, see if the Mr Coffee Electric grinder is up to snuff, but don’t actually snuff the coffee, it will hurt your sinuses.

I always start with a look at the device itself. It might not be all that important, but a lot of these builds are quite similar, and the aesthetics of the grinder might be the clincher for you. The Mr Coffee is a wonderful looking grinder. I was not a fan of the Cuisinart in spite of the overall quality, but here I am glad to see a flair for design coupled with build quality. The tall black look, with a few windows to the beans on the side, makes it look sleek, and expensive. The amazing thing is this build somehow manages to be very cheap, and quite sturdy. There is little rattle when using it, and the parts all seem to fit fairly flush. This was one of my concerns with the KRUPS build, which was similarly lovely to look at, but a tad on the shakey side in terms of build quality. If I were to level a complaint at this stage it would have to be the warranty. I was a little unhappy with the 18 month warranty that came with the Cuisinart, considering that the KRUPS came with 24, but the Mr Coffee is the most disappointing by far, with a mere 12 month limited warranty.

I am a fan of simplicity, and while the Mr Coffee cannot boast the streamlined, read basic, design of the KRUPS, the array of buttons on the front in neat little rows go a long way to making this thing a breeze to use. All you have to do is set the amount of cups and hit the grain selector. You can get up to 12 cups worth of ground beans at coarse medium and fine. All in all could not be easier.

On the inside there is a lot to be desired. While the automatic features are fantastic, and the low price is great, it is clear where they skimped. the core grinding tech used. I like bladed builds for the ease with which they are cleaned, but the uniformity of the grind is the biggest hurdle for the coffee aficionados. It’s all to do with the release times of the chemicals in the beans. You want the rich full flavor of a cup of coffee, not to mention that wonderful caffeine hit, and not the latter day taste of bitterness. The chemicals that cause the bitterness are relapsed quite late in the brewing process, and when they grain is uniform you can take it off the boil at the exact right time for a perfect brew. With randomly sized chunks of coffee beans you run the ever present risk of crafting a bitter brew, or a weak one. Who needs that anxiety, am I right?

This only really applies to pressed coffee machines, where you have to stew the beans a while to get a drink. In my preferred method this is not an issue, only the fineness of the grain is important. If you use a press you know what to do.

I don’t mind blade based builds, but it is easy to see where problems might arise with their use. If you use an espresso machine or a moka pot, anything that steam presses the grain really, then you should do fine with the blade, but if you stew the coffee in any way then you are going to want a burr grinder.

On to the important bit, the actual drinks. I love the fact that I don’t have to time the Mr Coffee to get the required grain that i want, it is a minor thing, but a great touch in terms of usability. I only use moka pots to make coffee, and a hand pump milk foamer too. The problem with then is in the fineness of the grain. Coarse ground coffee tends to be fairly weak when made in these, all about the surface area of the grind. I don’t consider it a huge problem, but it seems to me that it means that the first grind on all of these reviews does not do very well. Assume that the coarser beans will work well in a french press and go from there.

Concerning moka pots. I have been using them for a few years now, and I love them. I know I said I don’t drink coffee, but working in that industry for so long has given me an appreciation for the smells and textures and craft of the beverage. And I adore chocolate covered coffee beans. So I wanted to make lattes and other beverages at home, and didn’t quite have the cash for a home steam engine. Moka pots offer a base that is almost identical to espresso, down to the crema layer. So they are ideal for practicing and trying out new things. The main difference is in the steam pressure. Actual espresso is hit steam at nine times the pressure of a moka pot, leading to a thicker crema and a more full bodied taste. When you want a straight espresso there is no substitute, but if you want a refreshing latte, or you want to reverse engineer a frappe, you want a moka pot.

So I again made three lattes. I go for vanilla as my baseline drink, my signature coffee is large and under 100 Kcals, due to skimmed milk and stevia/vanilla extract combo. Fun fact, the more fat in the milk the harder it is to foam, so if you are a struggling barista who can’t quite get the milk to foam, splash in a little 0% and you’ll be floating on a cloud of milk. The Drinks themselves all came out great, but the first was judged poorly by my partner. She said that the second two where almost inter changeable though. It seems to be a theme with the blade designs, coarse is not good enough, but after a certain point it can’t get any finer.

When it comes to cleaning the blade based builds could not be any easier. All the bits come apart easily and can be cleaned separately in a few minutes. The issue for me is removing unwanted smells and trace amounts of coffee so I can grind up my spices. With the Burr grinder machines you are better off buying some purpose built cleaners, but here a slice or two of plain white bread will soak up the smells in a scant few minutes. I had a very trying time with the Cuisinart when I cleaned it, but I am happy to report that the Mr Coffee was pristine and ready to make a chicken rub in a half hour or so. The spice blend itself was simple, pepper corns, thyme, basil, oregano, garlic and paprika, rubbed all over a few brined chicken breasts and slow roasted. It was delicious, and one of the unforseen side effects of grinding fresh herb was the wonderful aroma that filled the house. Granted I live is a very small apartment, but it was still great. Cleaning that stuff out took a little longer than with the coffee, but the bread trick worked a treat on even garlic.

Now to the price. The baseline inexpensive grinder to my mind, and the top seller on amazon too, was the KRUPS at $20. It will have to make room up there in the upper echelons of the bargain grinders because the Mr Coffee is not only as good as it at grinding, but it is a little cheaper too. The price fluctuates a bit so I recommend checking for the current price with all the discounts applied here. If you can get it under $15 buy it. You will not find any other model (that isn’t worthless) on the market for this low of a price.

I have mixed feelings about the Mr Coffee. On the one hand it is dirt cheap, and still grind well, but on the other hand it does not grind uniformly. I feel like that being the biggest caveat is an exercise in pretentiousness, as the vast majority of coffee brewers will simply not care about that. Overall I have to call it a bargain, the price alone makes it worth considering, and if you are careful with the grain you can make a mean cup of coffee.