In their introduction video, the founders behind Slyde Handboards introduce themselves as Steve Watts, and his fiance Angela Fernando. They told the audience that they lived in Monarch Beach, California. Steve Watts grew up in South Africa, where there was a large surfing Community. When he was a kid, he used to use any means necessary to surf. Many people, according to Steve, look up to surfers but don’t have the time, resources, or energy to put the time in to be one. Their invention, the Slyde Handboards, allows people to try their hand at surfing without the huge commitment.
Steve said that they were at a breaking point for Slyde Handboards. They’d run up a bunch of credit card debt as well as borrowing money from friends and family. They took all of their wedding money that they had to put into the business, and they don’t get investment from the Sharks, they wouldn’t be able to get married or build their inventory. They were riding everything on getting an investment on Shark Tank. Angela ended the video by saying that they believe that if they got a Shark on board, they could get everything in their business and their life together. 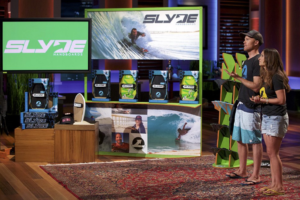 Angela and Steve Welter out into the Shark Tank, and onto the stage. They introduced themselves as the co-owners of Slyde Handboards. They requested $200,000 in exchange for 15% of the company. Steve started off the presentation by telling the Sharks that when he was a little kid, his family would take him down to the beach for the day. Once they were there, Steve and his siblings would try to find anything that they could surf a wave with, whether it be broken frisbees, flip flops or broken surfboards. Steve said that his favorite method was the fast food tray. Once he started traveling around the world, he found other Surfers that did exactly the same thing. That’s where he got the idea for Slyde Handboards.

Angela said that Slyde Handboards were wave riding boards that fit in the palm of your hand. They started a video on the large TV that was on stage it showed people riding waves using the Slyde Handboards which appeared to work about as well as a regular surfboard. Robert nodded his approval and said that it was cool. Angela asks them who wanted to help them make their idea a reality. They began to hand out samples. They even made a custom board for each of the sharks. Of course, Mark Cuban got the Dallas Mavericks board. Ashton Kutcher, who was the guest Shark for the episode, high-fived Kevin O’Leary with his board.

Robert wanted to know how the board’s work. Steve explains that once the board was strapped to your hand, and a wave came in, you would put the board into the wave and the board would take care of the rest of the work. Steve said that the hand board gave you an extra bit of control while you are riding the wave. Kevin, of course, wanted to know how much it cost the customer. Angela explained that the carbon fiber model is $199 while their standard model is $169. Lori wants to know how long that they’ve been selling the Slyde Handboards. Steve let her know that they’ve been selling the boards since 2011. Angela said that they’d sold $356,000 worth of it since they first started. Kevin asked how much they did last year, and Angela told him that they made $159,000. Kevin said that there wasn’t a lot.

Mark wanted to know how much they’ve done here to date. Angela stated that they’d done almost $60,000 in sales. She claims that the sales predictions for the end of the year were $295,000.Barbara asked how much money they’ve sunk into the business. Angela explained that they were supposed to get married in September and her mother had given them $10,000 to use for the wedding. Angela said that the boards that the Sharks saw in front of them were from their wedding money. Kevin stated that they’re using the money to buy the boards instead of using it on their wedding should their commitments the business.

Robert said that he had already invested in a business called Handboards. He stated that they worked mainly with cool independent surf shops. They hired a sales representative; they went to distribution. He claims that everyone involved would be old and gray before they made any money selling the hand boards. He wanted to know what their idea was to maximize their business and the quickest way. Angela told him that their idea was to focus on the specialty surf shops. Kevin wanted to know why they weren’t targeting big-box stores such as Walmart or Target. Angela said that they recently sent some to Target, but the product required education. She stated that they need the merchandising to support the sales because people weren’t familiar with that type of product.
Lori said that she wasn’t the right partner for them, so she went out. The two thanked her. Kevin stated that their numbers were small, and he recognized that they were just starting their distribution Journey. He admired their willingness to sacrifice their wedding to help out their business. He said that it takes a certain Surfer attitude, but he said it wasn’t for him. Kevin stated that he was going to disclose something that most people don’t know. His license to marry people. He mentioned that he was willing to perform their wedding right there in the Shark Tank. He said that they might not have a deal, but we still leave married. Steve said that was just as good to him, but Angela looked a little more hesitant. Kevin Went Out.

Mark wanted to know how their revenue broke down. He asked if they sold more too Surfers, who would be willing to put in the money, or if it was mostly kids. Angela said that their target audience was 23 – 30-year-old men. Angela stated that they also had a lot of 13 – 16-year-old brand ambassadors that we were pushing this forward. Mark said that the more athletic and sporty the customer has to be, and the higher end it was, the smaller the market was. Mark said that if the picture on their marketing was an eight-year-old with a little wave, then they could Market it as a surfer starter kit. Mark stated that one of his first companies with Tower paddle board, who came in doing small money in sales. He stated that they would be doing 10 million dollars this year. He said that they were looking for ancillary products. If Slyde Handboards was going more towards a niche product, then they wouldn’t be able to make a partnership.

Ashton said that he saw Slyde Handboards as a very minimalist approach to catching waves. He mentioned that he was also a surfer, and sometimes he didn’t feel like lugging a giant surfboard out to the beach. He said that the Slyde Handboards solve the problem of surfers just wanting to get out there and catch a couple of waves without looking around the giant, heavy surfboard. He stated that the biggest trick would be a balance of how to get into the more major stores to get sales with a broader audience, and also keep the edge. The trick to that would be there Branding. Robert said that the danger in that is if they go too big too fast, there’s a danger but it wouldn’t be cool anymore. He stated that he wasn’t opposed to going wide and making a lot of money.

Steve said that that was the ultimate goal, but they need to be careful with how they accomplished it. Ashton stated that it wasn’t his space because he was a farm kid from Iowa. He didn’t have any experience in getting things like this to market. But he did have a large online distribution channel that could help sell things with the right voice. He would need a partner. Ashton mentioned Mark, and Mark nodded his approval. Mark said that he could take it to power paddle board, who has the infrastructure and the media already in place. Ashton stated that he would do the deal for $200,000 in exchange for 25% of the company to split with Mark. Mark agreed.

Steven Angela thank them. Robert wanted to know what they thought of the offer. Angela said that they didn’t want to go above 20% equity. Angela stated that it’s all they had, and they put everything into it. Mark said that now they have helped to make it successful. Ashton stated that they have a pipeline online that they could Market this too. He started getting into the plan, said saying that they could Target demographics on Facebook right down to the age range. Ashton could help them build out of Facebook marketing strategy in a way that no one else could help them do. Mark said that if they walked away now, they would always ask themselves if that extra 5% was that necessary. The two nodded and thought it over.

Robert said that he had made a lot of painful mistakes with his other business, and boards. He learned how to distribute the other items successfully. Mark and Ashton try to interrupt him as he was getting his offer out, but Kevin cut them off. While Robert was pondering over the 20% equity, Mark pointed out that they were an only getting him and Ashton, they were also getting the infrastructure behind Tower Paddle Boards. Robert said he didn’t think that it would be a good add-on product to Tower Paddle Boards. Mark pointed out that they had front-page Distribution on Amazon. Angela wants to clarify that they didn’t have to hook up with Tower paddle boards, and Mark let her know that it was her choice. Kevin said that the whole thing was getting frustrating. He came back and offered them the $200,000 in exchange for the 15% that they were asking for, and he would also marry him on stage. Aston left, gestured to Kevin, and said sarcastically that he was their brand.

Robert cut in and said that he would give them the $200,000 in exchange for the 15%. Angela said that she valued everyone’s input. She stated that it was the third year that they were trying to get on the show. That meant that they knew that having more than one shark meant a lot. Mark offered them 22% to their counter of 20% equity. After a couple of moments of tense silence, Angela and Steve took the deal. As they left the stage, Ashton did a little happy dance, singing that he liked to win.

Slyde Handboards Now in 2018 – The After Shark Tank Update 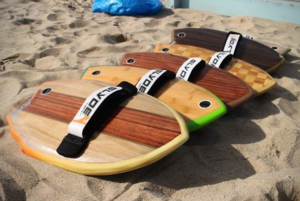 Since scoring a deal on the Shark Tank, Slyde Handboards has been featured in some significant Publications such as Men’s Journal, men’s fitness, and Forbes Magazine. As promised, they are now selling on Amazon where they have a deal for one and two day Prime shipping. In December of 2016, they started offering current or retired lifeguards 50% off of full retail price on their website. According to Forbes Magazine, they are currently expecting to do 1 million dollars in sales this year. They now sell on Amazon, and they also have 40 US retailers as well as a UK distributor and a Spain distributor.