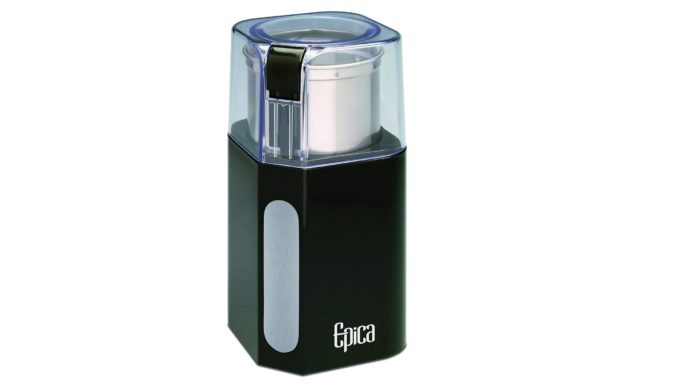 Seems these next few weeks will be devoted to bladed grinders. The Epica Electric, great name, has a fair few positive aspects to it, but that does not extend to the type of grinder used in the thing. The burr grinder is the preference of every coffee snob, while the bladed variety are for the less discerning, more pragmatic user. I see myself as a pragmatist, and prefer my grinders to be able to do more than grind coffee.

As for why i am a pragmatist, it’s because I actually don’t drink coffee. My partner does, and it is she who will be drinking the coffee I make, but I get my caffeine fix from other sources. I do love making coffee though. I spent a number of years as a barista in a local coffee house, and if I don’t say so myself I make a damn fine latte.

The great thing about bladed grinders is their ability to grind more than just coffee. You can make rudimentary smoothies, blitz up a ragu or, more importantly, blend spices. You can blend spices with a burr grinder too, but I do not recommend it. Cleaning them is a hassle, while cleaning and de odorizing a bladed grinder is much easier. I tested out not only coffee grinding with the Epica, but also my own personal chicken spice blend.

I have been focusing on grinders on the amazon top sellers list, and the nice thing about list is the variety that makes it up. it is not only populated by the cheap, nor by the specialized, but versatile products like the Epica are peppered all over it, which is alwasys great to see.

My plan is to test out three kinds of coarsness, though in this case I tested four. A ten second blitz, a twenty second blitz and a thirty second blitz. The final test is just a hold the button until my hand gets tired blitz, in an attempt to make the finest grain i can.

So let’s get to it, first a look at the build itself.

Discount Update: You can also check and see any available discounts at Amazon.com by clicking here!

As always we start by simply looking at the device. The Epica is absolutely lovely. I thought the KitchenAid looked good, but it is nothing compared to the Epica. A simple design, with rounded, yet geometric, edges, there is just something about how this one looks that I love. It has been a trend among the bladed designs that they look better than the burr mill grinders. I have no idea why that is, maybe due to the shape of the burr mill? I don’t know, all I know is that the Epica is well named. The bean housing section is a little small, able to hold around 2.5oz of beans, so don’t expect to get more than a cup or two of coffee per grind, but this added compactness can be seen as a selling point. It takes up very little space.

This is an electric grinder, I state that now because a few weeks back I reviewed a manual grinder, didn’t know they were still a thing, but there we are. I love them, so much easier to use. Just press the button for a length of time, and bam, you get what you want. I wouldn’t go much beyond a minute, but that is your choice.

Let’s talk about the difference between burr grinders and bladed grinders. Both have their uses, but the burr grinder is more suited to grinding coffee. you see, when you brew your coffee grains they release their flavor and chemicals at a speed dependant on the size of the grain. If all grains are the same size then they release at the same time. If they are not the same size then you get some releasing earlier than others. When coffee is brewed too long you get that bitter taste, too short and you get a weak brew. Burr grinders grind uniformly, unlike bladed grinders. If you are using any kind of brewing method that requires coarser grains then you are better off with a burr. If you are making espresso, or using a moka pot, then a long button press on a bladed grinder will work quite well.

Overall the Epica is great, it reminds me of the KitchenAid grinder. A versatile build that while not perfect for everyone, is wonderful for me personally.

Now to the making of the coffee itself. I use a moka pot for testing. This is not the best option, ideally I would have many different brewing methods available, but I do not. When brewing with a moka pot you want a fine grain, otherwise you end up with a fairly weak brew, depending on the uniformity this can still lead to a full bodied and tasty drink, but when the coarse grains are random sizes the drink tends to just be weak and bitter.

I love moka pots. I bought one to practice drink making at home, as I didn’t want to make bad coffee at work. Over the years my partner has enjoyed all kinds of weird drinks, thoguh thee days I tend to stick to the low calorie vanilla latte. Skimmed milk, vanilla extract and stevia. The reason I went with the moka pot was the crema layer. Good espresso has a crema layer, it changes the texture and flavor of the drink. Moka pot cofee has the crema too, when you use them right, and it makes for a drink that is as close to espresso as possible, at a fraction of the cost.

So I made the four drinks, and lo and behold the first two were busts. I stress, moka pots are not meant for this level of coarseness. In a drip pot or french press scenario the Epica might do well, but not here. The thirty second blitz produced a coffee that was passable, not the best, but far from undrinkable according to my partner. The final beverage, my @just hold the button in and see what happens” grind was the most successful. By holding it in for so long I ended up with a fine grind that was mostly uniform. This was not unexpected. I did the same thing with the KitchenAid and got similar results. I want to go back and try it with the KRUPS bladed grinder too, as I was less than impressed with the end results of that product.


I know I keep harping on about it, but remember that different methods of making coffee require different levels of coarseness.

I love cooking. I spend an awful amount of time in the kitchen, trying to perfect various recipes via trial and error, and the occasional google search. Spice mixes is an art I have only recently picked up, until now I just focused on the Umami flavors and binged them in there. Grinders are a god send when it comes to testing out a weird idea. I am happy to report that the Epica handes rough herbs and coarse spices like a champ. A quick blitz  is all you need to make a nice rub for your chicken, pork, veal, whatever. Cleaning it is a breeze too. you can remove the blades, and take apart the whole thing to clean separately. Getting rid of the leftover smells is a simple matter too. Don’t bother buying the cleaning products you see online, just blitz up a slice or two of bread and it will absorb the smells.

Finally a look at the price, and here is where the Epica shines. You can usually get it for a great price at Amazon, it’s constantly changing so click here to check the latest price. If you can get it for under $30 it’s a great deal, if it’s over $30 it’s still a solid deal but you can probably wait and buy it at a later date for a lower price. The fact that it is cheaper than the KitchenAid makes it my current favorite in the bladed category.

There is a market for the Epica, of that I have no doubt. it is a lovely looking build, that is hamstrung for some by the tech it uses to grind. I have to grind for nearly a minute for a decent moka pot latte, but that is a small price to pay for a fine coffee. The quality of the spice mix was great, and the price is on point. For those out there who use any other kind of coffee brewing method, then you are better off looking elsewhere though.