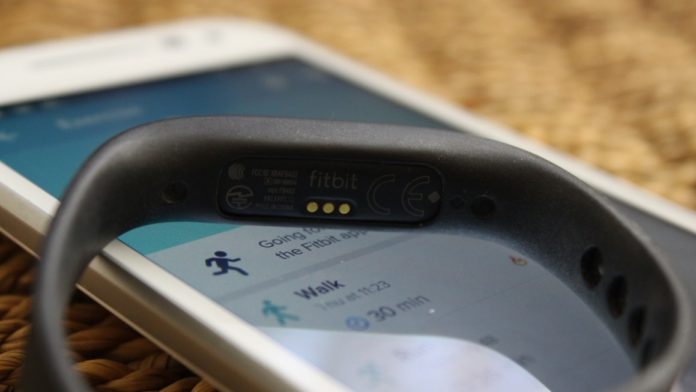 It seems in the activity tracker realm, runners get all the attention. Heart rate trackers, GPS, integration to your phone that comes just shy of responding to your text messages with “Sorry, I’m running”. It also seems that the people at Fitbit may have noticed this trend to, and tried their hand at making a device for someone else: Swimmers. But how does the Fitbit Flex 2 stack up against its older siblings, and other companies who are also trying to appeal to wider crowds? Let’s take a look at the Fitbit Flex 2.

When opening up the box to the flex 2, you’ll notice one thing above all: how small it is. Designed to outsource quite a bit of the technical heavy lifting to your phone, the Flex 2 allows itself to be downright tiny, at less than half an inch wide, and an inch or so in depth. With one of their many colors of silicone bands available for insertion, one could easily mistake the device in weight and size to a normal silicone wrist band.

Lacking from the Flex 2 are two components which may surprise users: The lack of a heart rate monitor and interactive screen. While wholly doing away with any manner of heart monitor, the Flex 2 replaces an interactive screen with a vertical set of notification lights, relying primarily on your phone for any interactivity. This allows for a tighter fit and watertight seal than previous versions of the device, and while it does take away some of the functionality of the device, it is not a deal breaker at the MSRP of around 100 dollars. This also does allow for a very easy to read interface in terms of checking to see if you’ve received a call, text message, or how close you are to meeting your daily goal in terms of cardio, which we will view in the app and functionality section through the five LED lights on the front of the device. I personally liked the double tap feature, which shows how much more activity (steps in my case) was needed before reaching the daily goal. These lights also have distinct patterns for calls, texts or reminders, which is great for people like me who often have their phones set to silent or vibrate. The accompanying vibration of the Flex 2 is quite strong, which is great when being alerted mid workout.

In terms of fashion choice, the Flex 2 does have plenty of options of the table. For those who want to be fit and flashy, there are bangles available in stainless steel or either rose or standard gold, or a necklace (which resembles the gold bangle) for around 70 to 100 dollars. For those like myself, there is also a great deal of colored silicone bands to select from, as well as match sets for around $30. It was my experience that though well made, the bands were a little hard to get on, but stayed on nicely. Keep in mind that my wrists are considerable larger than most, so one’s experiences may differ. A huge plus in this experience is that no matter how much I wore it, either inside or outside, sweat being trapped or any negative sensations associated with long wear were absolutely minimal at worst. With that in mind, an occasional wipe down may be a good idea, just in case.

Overall, I would say that for the price, this is a well constructed piece of equipment at a decent price. While I do have some qualms about a non-interactive screen in the traditional sense, it does allow for a sleek and lightweight design that one could easily forget they are wearing.

For those of you who have played with the Fitbit Flex or other Fitbit devices, there should be no surprise that the company has put quite a lot of thought and effort into the app accompanying the Flex 2, certainly as a way to convince those on the fence that a minimal device can still deliver on plenty of promise. It should be noted on the outset that again, due to lack of a heart rate monitor and a GPS system similar to one of Garmin’s offerings, some of the more refined categories for data are missing. However, what the Flex two lacks in that raw data it makes up for in motivation. With the three axis accelerometer, the Flex 2 can track your steps data, amount of time spent on the move, and even sleep. Also, as mentioned before, the Flex 2 and the app do a great job of tracking swimming progress. This seems to be the spot where the Flex 2 does shine, as it seems to automatically detect presence of water and can track pool lengths. Given that the description of the device states it can go to nearly 150 feet, I would expect it to last in the pool much longer than most of us could handle the chlorine. 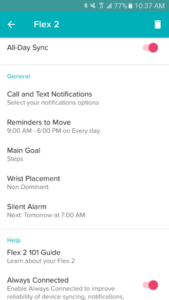 Of course, it not being scuba season where I was at, I would not know how true the depth claim is, but if anyone does I would love to hear about it in the comments. To help motivate the user and keep track of data, there are an ample amount of goals within the app to reach (my personal favorite are the ones like Penguin March, which is 70 lifetime miles walked) and the adventures. The adventures portion of the app gives me a slight reminder of Pokémon Go, in that certain areas (national parks, monuments, etc) can give certain achievements and bits of story about the area as you unlock them through movement. I would say that this more than makes up for the strictly quantifiable aspects, especially if you and several friends can have long term fitness competitions to see who can go farther, unlock more achievements, or just want to have some fun hiking and exploring.
In terms of app design itself, it’s a simple enough design that allows for plenty of user customization in terms of goals, reminders and other such things. Notifications can even be done over your standard SMS messaging or WhatsApp, though the latter may burn through battery a bit quicker, an issue we will address again soon. The app and Flex 2 are connected over a Bluetooth line and usually sync and update quite quickly. The initial installation for both the app and initial syncing took me under two minutes, which I would say is quite acceptable.

My one complaint about the tracking and app is that it seems to occasionally have problems in terms of the first few minutes of tracking. This can cut a few hundred steps off your run and may need to be adjusted for accordingly. Otherwise, the tracking was accurate enough to serve as an entry level fitness tracker.

Overall, I would say that this is a fine device. Certainly not the best in the market, but not the worst one could expect from a fitness tracker that seems to aim for the entry level market. The tracking of most activities would be defined as “close enough”, the design is in my opinion very neat, and the app itself is a wonderful motivator. There is still one hang-up though that I have yet to address, and that is the battery and charger. Now, going into this review, I knew that the Flex 2 probably wouldn’t have the longest battery life, as despite tech getting smaller year over year, there’s a limit to how far one can go on a battery that makes a dime seem large. That being said, I wasn’t quite expecting a battery that only lasted 4 to 5 days depending on frequency of use and messaging preference. Likewise, while I understand the need for a novel charging method to ensure the waterproof nature of the Flex 2, as a traveler I find the proprietary charger a bit of a hassle, as the odds of losing it in a bag, on a train or on a plane are remarkably high and ordering a new one is expensive and can take days. While not deal breakers, I would say that these are two key points that would make me reconsider purchase if the charge were any shorter, or the charger any more expensive.

Overall, I would say that the Fitbit Flex 2 is an excellent choice as an entry level fitness tracker, or as a secondary tracker to a smart watch. While missing some of the bigger features of the mid to high cost fitness trackers, what the Flex 2 does do, it does well. The construction and customization are nice, the functionality fine, the app excellent, and despite being a pain in terms of charging, makes for an overall package that for $100, can’t be ignored. That said you can usually get a pretty decent discount on the Flex 2 by clicking here.

In terms of a 10 point scale, I would say that the Flex 2 would get around a 8.5/10. If you happen to own a Flex 2 and feel I have missed some features or talking points, or if you have questions regarding the Flex 2, feel free to comment below, and have a great day.

To automatically apply the discounted price at Amazon.com you can click here.