What Happened to Paul Zerdin – 2018 Update 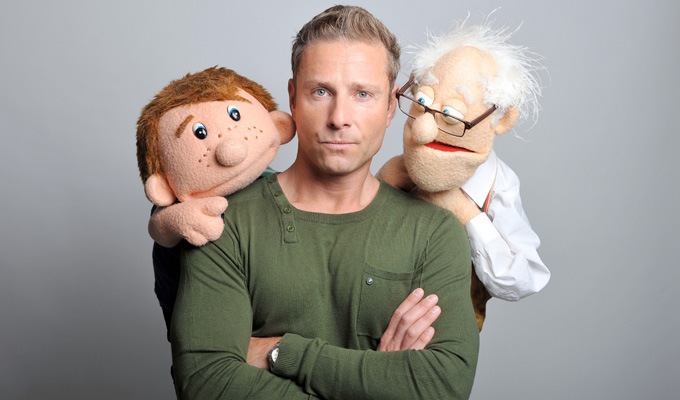 British ventriloquist and comedian, Paul Zerdin rose to international fame after winning the tenth season of NBC’s America’s Got Talent. Born in London, England, he was always fond of puppet shows as a young boy. At the age of ten, he was gifted a book on ventriloquism by Britain’s renowned ventriloquist, Ray Alan himself- that was the turning point for Zerdin. Captivated by the book’s contents, he spent most of his spare time practicing what was listed in the text. By the time he was in his early teens, he was spending thirty minutes daily practicing ventriloquy. Having been unsuccessful in attaining his GCSEs, Zerdin started to work at a local magic shop in the early 90’s; it was ultimately during that period that he started to hone his skills as an entertainer. Not long afterward, he landed his first television gig as a magician on the BBC reality show, Tricky Business.

From there, Zerdin -who was only twenty years old at the time- received a huge break after being offered a two-year contract to present Disney’s children’s programme, Rise and Shine. Around that time, he also made a small cameo in the made for television film, Happy Birthday Shirley (1996).

Continuing on his path to fame, the aspiring ventriloquist eventually took part in the reality game series, The Big Big Talent Show (1996) later that same year- which offered him a chance to perform on Primetime Saturday night television. Lo and behold, Zerdin ultimately came out as the grand champion of the show after having received over 100,000 votes. Not only did the experience act to boost his popularity at the time, but it also introduced him to many big-names of reality TV such as Nigel Lythgoe, who would later create the popular series, American Idol and Popstars. As it happened, Lythgoe soon took the young twenty-something under his wing, which allowed him to further appear in a number of TV shows.

Throughout the years, Zerdin has entertained countless crowds across the country as a comedian. Not only that, but he’s also graced the screens on various TV series such as Favouritism (2005), The Story of Light Entertainment (2006), The 5 O’Clock Show (2010), and Just for Laughs (2010). After several scattered TV appearances, a huge opportunity came his way; he had the opportunity to audition for the popular NBC reality series, America’s Got Talent– which was created boy none other than his former mentor, Lythgoe himself. Many weeks later in the fall of 2015, Zerdin- who had been impressing both judges and audience members with his ventriloquy, was announced as the big winner of the whole competition.

So what has the former America’s Got Talent winner been up to since then? Has he appeared on any TV specials as of late? Will he be performing any shows up on stage this upcoming year? What happened to Paul Zerdin? Where is he now in 2018? 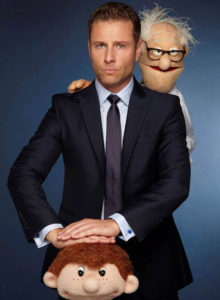 Born in London, UK in 1972 (exact birthdate unknown), Paul Zerdin had always been interested in puppet shows as a young boy. Growing up, he often performed for both friends and family. When he was ten years old, a friend of the family made him a puppet theatre so that he’d be able to put on proper shows. From that point onward, he started to invest more time into the hobby, which quickly turned into an obsession; it wasn’t uncommon for him to spend hours at a time perfecting his craft. The real turning point in his life however, was when he was given a book on the subject of ventriloquism by Britain’s famed ventriloquist, Ray Alan.

Enthralled with the contents of the book, it did not take long for Zerdin to absorb all the material listed in the text. By the time he was in his early teens, he was spending at least thirty minutes a day practicing talking without moving his mouth in front of the mirror. After unsuccessfully attempting to obtain his GCSEs, Zerdin landed a job at a local magic store; it was during this period that he learnt various magic tricks, and honed his craft as a performer. At the age of nineteen, he appeared on national television for the first time as a magician on the BBC TV show, Tricky Business (1991). From there, a huge opportunity soon came his way; just a year later, he was offered a two-year-contract to present the Disney children’s programme, Rise and Shine. 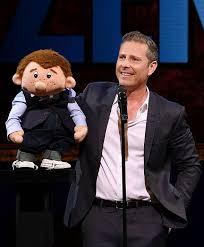 At the age of twenty four, Zerdin made a small cameo in the made for television film, Happy Birthday Shirley (1996). From there, he eventually received a small break after participating in the LWT reality game series, The Big Big Talent Show (1996), which gave aspiring performers a chance to perform on stage on Primetime Saturday night television. Having successfully wowed everyone in the audience, Zerdin was later announced as the competition’s gand champion, after having received over 100,000 votes. Not only did the show raise his profile as an up-and-coming entertainer, but it also introduced him to Nigel Lythgoe- the man who would later create the popular reality shows, American Idol and Popstars.

Despite his success in the 90’s, it soon became apparent by the end of the decade that traditional variety series were gradually losing their appeal to the public. In response, Zerdin made the decision to incorporate stand-up comedy into his routine.

Paul Zerdin as a Contestant on America’s Got Talent 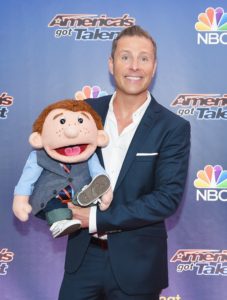 After many years of working as an entertainer, a huge opportunity came Zerdin’s way- he had the chance to audition for the popular NBC reality series, America’s Got Talent, which was created by none other than his former mentor, Lythgoe. Trying his hand at the competition, his audition saw him using his voice to imitate a soundcheck malfunction, all while talking to his puppet Sam about the judges who were watching him. Having successfully impressed all four of the judges- Howie Mandel, Howard Stern, Mel B, and Heidi Klum, Zerdin was soon sent to the subsequent Judges Cuts Round.

The subsequent round, otherwise known as Judge Cuts (e.g. Las Vegas Callbacks), takes place on the Las Vegas Strip, during which a number of competitors perform a second time for the judges. After their respective performances, the judges then choose which acts get to move on with the competition and which are eliminated from the show.

For his second auditions, Zerdin performed a routine that consisted of him telling a story of Little Red Riding Hood with the help of a baby puppet; the Big Bad Wolf is also changed into a fluffy, yellow duck. Toward the end, the baby puppet “urinated”, a performance that garnered him enthusiastic applause from both the audience and the judges. In fact, Judge Marlon Wayans enjoyed his act so much that he pressed the Golden Buzzer (which can only be used once per season per judge), which sent Zerdin straight to the Quarterfinals.

For the Quarterfinals, which were broadcasted live from New York City’s Radio City Music Hall, Zerdin performed a ventriloquy act that saw him arguing with his puppet Sam- who later refused to talk. As if that wasn’t impressive enough, Zerdin soon left the stage, leaving Sam to be in front of the judges by himself; much to their surprise however, the puppet soon came to life and started to converse with the judges. After a while, the performer returned; as soon as he did however, Sam once again fell quiet. Met with a standing ovation, Zerdin ultimately earned enough votes to move on to the Semifinals round.

Having made it to week two of the Semifinals, Zerdin’s next performance saw him switching places with a dummy named Howie, with the use of a remote-controlled mask. Later in the act, the ventriloquist then pretended to be one of the judges, which forced Howie to dance and twerk on stage. Met once again with a standing ovation, the votes that he garnered was enough to send him to the Finals. From the 22 acts that moved on to the semifinals, only ten advanced to the finals; some of the other finalists include comedian Drew Lynch, magician Derek Hughes, the vocal duo The CraigLewis Band, singer Benton Blount, and Mentalist Oz Peralman.

Paul Zerdin as a Finalist on America’s Got Talent 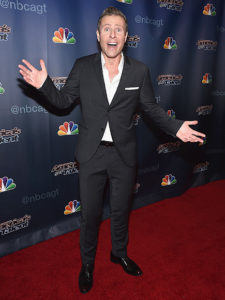 For the finals, Zerdin performed an act that consisted of him interacting with Albert- Sam’s grandfather. Not only did he entertain the crowd with various jokes about the latter’s suppository use and hearing aid, but he eventually also managed to have a conversation with three puppets simultaneously after bringing out Sam toward the end.

From there, he eventually had Sam lip-sync to one of Terry Fator’s hit songs in the grand finale. Another stunning performance, it earned him enough votes to land him in the top five; some of the other competitors that made it to the finales include Piff the Magic Dragon, The Craig Lewis Band, Derek Hughes, Oz Pearlman, and Drew Lynch, among a few others. At the end of the competition, Zerdin was announced as the grand champion of the talent series, having finished in first place. As the winner, he was awarded the top prize of $1 million and the opportunity to headline a residency in Las Vegas.

Since his big win on America’s Got Talent, Zerdin has been featured in several popular TV shows such as Live! With Kelly and Michael (2015), Sidewalks Entertainment (2015), and Home & Family (2015). In 2016, he was even a contestant on the celebrity edition of the classic game show, Who Wants To Be a Millionaire.

If you haven’t yet watched the ventriloquist perform on stage, here’s your chance to do so- according to his official website, Zerdin has a number of live tour dates plates for this upcoming year. For example, just in March alone he will be performing nine different shows from Phoenix to New Brunswick. Some of there cities that he’ll be dropping by this spring/early summer include Newton, New Jersey, Verona, New York, Philadelphia, San Antonio, the list goes on. From the looks of it, the former America’s Got Talent winner will be performing right through to the end of November 2017. Be sure to grab your tickets while they’re still available! For more information regarding his tour dates, please visit his official website at paulzerdin.com.

If you’d like to stay in touch with the British ventriloquist and comedian, you can do so by following him on social media- you can find Paul Zerdin on Twitter and Instagram at @paulzerdin.