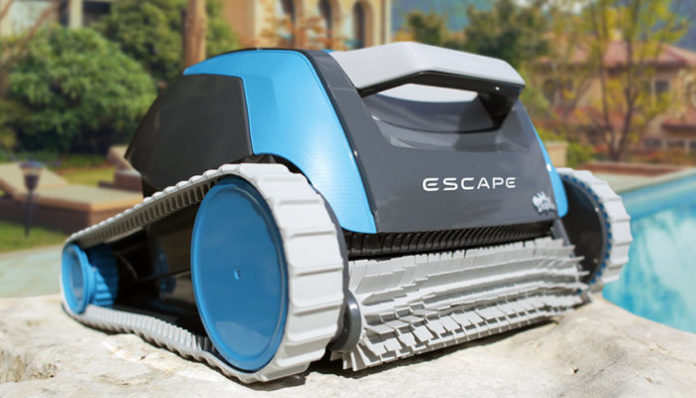 Well well well. It seems a fair number of folk are very interested in the Escape, and not just by that name. The E10 and the Active 10 are all the Escape. It’s a great bot, don’t get me wrong, but the lack of one very specific feature is glaring, and it leaves me wondering if I am missing something. I’m not though, I’ve looked at this core bot on a number of occasions, looked at it from all angles, and while my original opinion has changed a little, the crux of the points I have made in the past hold true. Seems I will have to go through the motions again.

The Dolphin Escape is an above ground pool cleaner, the short cord is a dead give away. If you have an in ground pool make sure is it a small one before considering this bot. The core difference between this bot and the Active 10 is in the price. I came down hard on the Active 10 for the lack of features and the relatively high price tag. While the first issue has not been addressed, and indeed would be impossible to address without a total redesign, the pricing issue has been removed entirely, making the Dolphin Escape far more attractive to a certain kind of consumer.

So let’s dive right in, see whether this is the right bot for you or not.

The thing about above ground cleaners that I hate is the almost universal insistence on wheeled builds. They work, sure, but are far more prone to stoppages, and I loath cycle stoppages. The Escape, and by extension the rest of the clones, uses a tread propulsion method, which removes some of the problems seen on other bots, like Dolphin’s own DX2.

At its core, the Escape is a well designed bot, the build quality is high, as it is with all Dolphin builds. The overlook of the Escape is pure classic Dolphin, Navy and blue, looking fit for purpose, and makes a nice change from the grey on grey seen on the Active 10. It might not make as sharp a contrast when in the water, but it is still very easy to see as it goes about its business.

Always be sure to do the rattle test when you get a new robotic pool cleaner. The Escape derivatives I have tested have been rattle free, a simple shake is enough to tell you that. The parts fit flush, making it highly unlikely that the bot will have a factory fault. Dolphin tend to have fairly good warranties though, so even in the case where you find rattle you can be assured of help from the firm.

I realize that the look of the build is less important than the quality of the build, that is obvious, but in tie breaker scenarios, pitting a clone bot against itself, or another brand with a similar feature set you are going to pick the best looking one.

I tend to be trepidatious around folk who call themselves experts on any topic. No slight on them, of course, but healthy skepticism is important. All that said I do know quite a bit about robotic pool cleaners. Always more to learn, but at the core what I look for is three features. The ability to break up large debris, a powerful filter and the ability to climb a wall. While the Dolphin Escape can do the first two well, it cannot climb a wall, and thus the overall utility is reduced. It might put it out of the running for me personally, but I know that there are plenty of folk that don’t care about the wall climbing features seen in many other bots.

The Dolphin Escape is an above ground robotic pool cleaner. As I mentioned before, you can use it in an in ground pool as well, but with a cord length of 40 feet it had better be a small in ground pool. That cord is a swivel cable though, and I adore them. I talked about cycle stoppages earlier, and the cord getting tangled is the number one reason for it. A swivel cable makes that extremely unlikely, so I am always pleased to see their inclusion.

The scrubbing brushes are some of the best on the market right now. Dolphin have thrown everything into  making a better pool scrubbing system, and boy howdy did they succeed. My old benchmark for excellence with Dolphin was the Nautilus, and I still think it is one of the best robotic pool cleaners ever made, but it has been out classed by the new tech coming from the firm. The Escapes brushes move at around twice the rate of the Nautilus, but they are softer. So it can break up all but the most hardy materials, clean the grout from the tile line, and not damage your pool bottom. Overall very impressive cleaning power.

The on board water filter is powerful as well, able to process 3,735 gallons of water an hour, and with a 2 hour cycle, that is more than enough to leave your pool crystal clear. There are options for a longer cycle as well, if you want to give your pool a deep blue clean. The only downside is the lack of wall climbing. At the end of the day you are buying the robotic pool cleaner to remove a chore from you. without wall climbing I feel that you still have a chore to do. I get that some people don’t have an issue there, as cleaning a pool wall does not take all that long, but it is an issue for me.

There are issues with the build, I have made that clear, but the strengths of this bare bones product are clear. A powerful cleaner, and amazing filter, giving us the very basics done very well. If you can overlook the lack of wall climbing, read on, things get nothing but complimentary from here.

Maytronics Dolphin Escape Ease of Use

I have been reviewing robotic pool cleaners for a long time, and in that time I have made little categories in my head for them. Makes it super easy to hone in on positives and negatives of the builds when you classify them by common tech. At base we have the All in One models and the External filter models. Both have good and bad points, but I prefer the simplicity in the All in One models. The All in Ones can then be separated further, into the Ultra Moderns and the Legacy Design builds. Both work just as well, but the Legacy Design models have more day to day annoyances in terms of use. Ultra moderns have a few quirks that I am less than fond of as well, but they are better than the Legacy Designs to work with. The Escape is neither. The Escape falls into the growing category of Post Moderns, and boy are they good.

The Ultra Moderns used a Filer mesh system, better than the older filter bag system in terms of ease of cleaning and replacement. The could be either bottom or top mounted, but mostly they were bottom mounted, so you had to flip the whole bot over in order to change the bag, a bit of a chore. The Post Moderns use a filter canister, and they are excluseivly top mounted for ease of access. All you have to do now is pull the top mounted clasps, pull out the canister and hose it down. No more do you have to clean out a bag or filter mesh by hand, nor do you have to worry about debris falling out the bottom of the bot, nor even do you have to clean out the bot itself after every use. Phew, talk about a run on sentence. I cannot oversell the tech here. It really is a game changer. The Future of robotic pool cleaner tech, in my opinion.

The Escape is one of the easiest to use bots on the market, matched only its clones, and the bots ranked higher on the Active totem pole. At this price it is sorely tempting.

Back when I first reviewed this model, albeit under a different name, it was up and down. The Core features left me cold, the core design blew me away, and the price was a nail in the coffin. Here, I am forced to express admiration for Maytronics Dolphin, because they have address the fundamental issue I had with the Active 10, the high price. The Escape price varies a bit (usually a bit over $500) so I recommend clicking here to see the current price at Amazon.com. Also remember that a robotic pool cleaner is an investment in you, in your time, and in your other pursuits.

There is another cost to take into account when you buy a robotic pool cleaner. The cost to run it. There are a few models that cost nothing to run, they are external pump builds, and the feature set is too small to be worth it for me. The average cost per cycle of the Escape is $0.12 to $0.19, depending on the price per kilowatt hour in your area. Not a huge figure, but knowing how much a new piece of tech will cost to use is important these days, as we add more and more electronics to our daily lives.

Now we come to the warranty. I review products for a living, and one of the most overlooked aspects of these kinds of reviews it the warranty. The Escape comes with a 30 day guarantee and a 1 year warranty. They do not name the type of warranty, but it seems fairly comprehensive. Not quite as robust as a bumper to bumper warranty, the kind that Dolphin are famous for, but there is enough here to satisfy me that in the event of a hardware failure I would be covered. I will be making inquiries regarding the transparency of their warranty information, as finding this was harder than I would have liked, and for some Dolphin builds I have been entirely unable to find warranty details.

So here we are at the end again. There are more things here to like than to hate, but that core feature being missing binds my opinion. I cannot recommend it over the Active 20, or the Cayman, as it cannot climb a wall. If I were to look at each section one at a time we see that the escape is a high quality, well designed bot, with a small, but powerful, set of features, some of the easiest to use tech and a price so good I found it hard to believe. If you can overlook what i cannot, then there is no doubt in my mind that you will be getting a damn fine product out of the Escape.

To check out all the current discounts and promos on the Dolphin Escape you can click here.