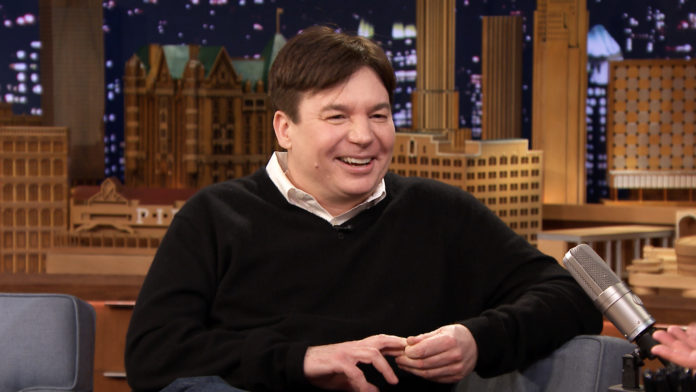 Mike Myers was one of my favorite performers growing up. I still watch his best ever few years or so, and right now am watching the first Austin powers flick. It still holds up, unlike some of Jim Carey’s early work. But I’m only here to talk about Mike’s movies a little, the core of this article is about his net worth, and despite the abysmal performance of his latter day movies, he is still a very wealthy man. Honestly, it isn’t much of a surprise. Knowing even a little bit about how actors make their money will tell you that. A few early hits, some savvy investments, and not spending money like Nick Cage on a bender will leave you with a substantial fortune.

So let’s dig in here, see where Mike Myers made their money, and where he will be going in the future.

How Did Mike Myers Make His Money & Wealth?

Mike Myers was born in Toronto in 1963, to British parents. Mike has been in show business his entire life, getting his start at age 2 with commercial work. this continued for years, until the mid eighties, when he got serious about his comedy. He trained in Chicago, at the Improv Olympic, where he developed the now famous Wayne Campbell character. It surprised me to find out that the character did not originate during his time on SNL, and we all know the golden goose he turned out to be.

He joined SNL in 1989 as a main cast member, and it is here that he really nailed the Wayne Campbell character. Alongside fellow comedian Dana Carvey. the pair had great chemistry, and soon penned a script, under the name Wayne’s World. The film was released in 1992 and was a smash hit. This was Mike Myer’s first feature film, and it propelled him to true international stardom. Wayne’s World had a budget of $20 million, and pulled in $183 million. So popular was the flick that it got a sequel the following year, 1993. This was not the only film that Myers would appear in in 1993, he also starred in So I married an Axe Murderer, which was a little on the crap side, not even making it’s budget back in box office sales.

Myers left SNL in 1995 and took a two year break from film and television. During that time he wrote what is probably his best film. Austin Powers: International Man of Mystery. The hilarious spoof of the spy genre, filtered through the lens of the 60’s by way of 1997 was a huge international success. It grossed more than $60 million, and while that figure pales in comparison to Wayne’s World strong VHS sales and word of mouth led to the 2001 sequel, The Spy Who Shagged Me, grossing over $300 million on a $33 million budget.

Myers’s final pillar comes in the form of a Green ogre. While it is easy to see why Shrek became a smash hit, with its smart script and excellent animation, I feel Mike Myers’ performance was a big part of the appeal. A Scottish accent nearly as good as his Fat Bastard character, Shrek was a hit with both children and adults. He made five of the films over the decade, with the last one released in 2010.

Outside acting, Mike has tried his hand at directing, and is making a name for himself as a documentarian. With such a strong base with which to start not even the films that made pretty much no money, like The Cat in the hat and The Love Guru, could make a dent in his fortune. Some savvy investments into local businesses, and of course his own production company, make that $175 million figure make a lot more sense.

Mike Myers has been married twice in his life. First to his creative partner Robin Ruzan, who he divorced in 2007. His second marriage was to Kelly Tisdale, and is still going strong. The couple have three kids together. In an interview in 2010 Mike stated that he always wanted to be a father, if only he knew then that it would happen in a few short years.

Where is Mike Myers from?

Mike Myers was born in Scarborough, Ontario. it is on the East side of the city of Toronto. He is of English descent, both of his parents were from Liverpool, England. A look into his citizenship tells us that Mike Myers hold cards for Canada, the United States and The UK.

Where does Mike Myers live? Pictures of Mike Myers’s house.

Mike Myers owns property all over the country. He had a duplex apartment in New York, supposedly paparazzi proof, an 8 acre estate in Colchester, VT and a lavish Home in Beverly Hills LA. So which one should I put in here? The Beverly Hills pad is my favorite, see left. The property he bought in the Tribeca neighborhood of New York was put back up for sale just six days after he bought it, and he ended up selling it at a loss, of around $675,000 too.

What Happened to the original Wayne’s World 2?

This is such a good story. So Wayne’s World 1 was a huge success, right? So the executive tasked Mike with penning the script for the sequel as soon as possible. Mike wanted to base it all on a British flick from the forties called . It would have say Wayne and Garth seceding from the united States after finding an ancient scroll. The only problem was that the studio didn’t own the rights, and the original rights holders could have sued. Mike was under the impression that everyone knew that he was riffing on Passport to Pimlico, and it was said to him that the rights had been acquired. He was called into Sherry Lansing’s office where he was horribly berated for an hour, to the point where he feared for his very livelihood. She claimed she could take him for all he owned and leave him a husk. Mike was shooed into a room and fed under the door for a week while he hastily penned the new script. And thus we got Wayne’s World 2

Where has mike Myers been for the last Decade?

When I was growing up it seemed like there was a new film starring Mike Myers every other week. Since 2003 he kinda disappeared. Sure, he’s appeared in a  few cameos, and there’s always the Shrek flicks, but by and large he disappeared from the cinema. I put it on The Love Guru at least a little. Going from being critically acclaimed, with Wayne’s World and the Austin powers movies, to flops like the Cat in the Hat and the Love Guru are sure to have taken its tole on Mike’s mind. He continues to work of on projects, and supposedly has a few scripts that he’s working on right now, but they take time. Since 2008 he has been branching out into other positions, behind the camera, directing a few pieces. I would love to see a return to form for the man, but I cannot for the life of me imagine what he might do. The longer we wait the more pressure is on Mike to deliver the goods, and I think we might have a Duke Nukem situation brewing. Time will tell if Mike returns to form, or goes the way of Mel Brooks.