Top 10 Most Dangerous Roads in The World 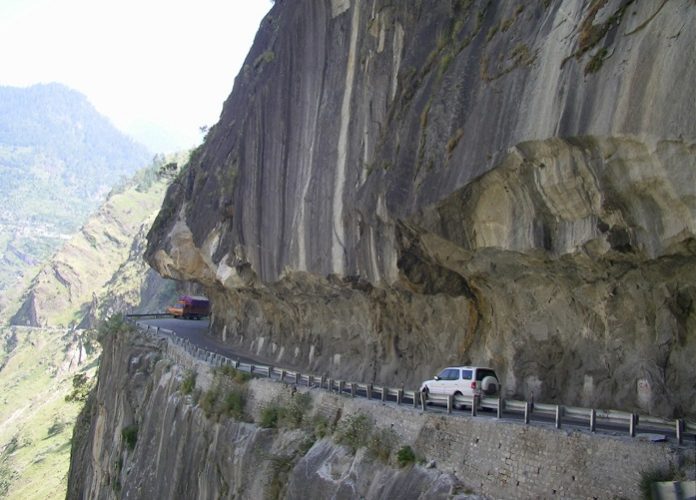 The Human race took a big step forward when we invented the wheel, and it goes without saying that roads were not far behind in becoming ever more commonplace. Animal tracks developed into paths ridden by horse riding travellers and those soon became well worn tracks that the earliest wagons and coaches took to carry people to far-flung places. As humanity has spread across the globe and our population has increased roads have become bigger, longer, stronger and able to be built in the most inhospitable of places.

The Roman Empire crossed conquered European territories on roads that can still be seen today, known for their straightness and never-wavering path over any obstacle that nature put in the way, But the Romans had a huge amount of slave labor to rely on to create their transport network, while road makers today rely on modern machinery and technology to lay down a mastic asphalt path that can carry millions of vehicles a day, over virtually any type of terrain in any type of conditions. But these technological advancements have seen plenty of roads built around the World that just perhaps shouldn’t really have been constructed in the first place, merely due to the numerous dangers that await anyone brave enough to actually use them, but where are these dangerous and risky roads? And what are the ten most dangerous roads that are available for you to risk your life on today? Make sure you’ve fastened your seatbelt as we take a look at a few of the riskiest rides of all.

The stunning natural beauty of the Stelvio Pass in the Alpine region of Italy has been featured as the location for thrilling movie car chases for everyone from James Bond to Jason Bourne, but this beautiful road is littered with 180 degree turns that will send the careless driver careening over a low concrete barrier into the mountains below. The long straight sections seem to encourage excessive speeds but a combination of icy roads, slick surfaces and sudden changes in weather can catch all but the most careful of drivers out, so if you are visiting this scenic part of the World, concentrate on the roads before you take time to enjoy the incredible view.

Many tourists like a nice Ocean view while they’re visiting the coast, but Norway’s Atlantic Ocean Road really takes you closer than most roads to that sea side experience. The five mile long highway in the Northern coastal region links several islands and has no fewer than eight bridges, including one long stretch in the middle of the ocean that is notoriously battered with huge waves and high winds during even slightly turbulent weather conditions. The Norwegians frequently brush off the type of weather conditions that would leave the rest of the World huddling in front of a warm fire but even they take great care along this treacherous route during storms, as aquaplaning is common in such conditions, and even though this modern road has a decent guardrail, there really is nowhere other than the bottom of the sea to go to if you do manage to leave the road entirely.

The Skippers Canyon Road on New Zealand’s South island is a narrow unpaved road that was literally carved out of the side of a steep cliff face in the 1880’s to facilitate the gold prospectors that flooded into nearby Skippers canyon. The seventeen mile long twisting road has some incredible views of the beautiful New Zealand landscape but don’t get too carried away looking at the scenery, the narrow track has a sheer drop of hundreds of feet just past its narrow edges. With frequent landslides and an uneven surface tourists are effectively banned from travelling along it due to their rental car insurance not covering travel on the road, and only four wheel drive vehicles use it regularly. Those unlucky enough to meet another vehicle along the road will often have to reverse several miles before they find a section wide enough to allow passing, once they decide who is going to be the one doing the reversing that is.

Skippers Canyon was considered a major engineering feat when it was constructed, but the Karnali Highway in Nepal is a mountainside track that took an incredible amount of effort to construct in the region of the highest mountain range on Earth. The 155 mile length of the road through the rocky Himalayas of Western Nepal is carved through mountain tops and into sheer drops, but the surface of the dirt road is so dangerous that even cyclists have trouble traversing it in parts. About fifty people are killed on the road every year, helped in part by the numerous trucks and coaches that use it daily, and who notoriously pay little regard to the sheer drops, dangerous weather conditions and frequent potholes that adorn the surface.

To give the D915 Road in Turkey the title of road is a slight exaggeration. Really it’s no more than a dirt track winding through sixty six miles of the foothills of Mount Sogani, and it comes complete with 30 hairpin bends that are sometimes so tight that they cannot be made without reversing at least once. Drivers with vertigo might wish to give the D915 a miss too, it has dizzying 2,000 feet drops just inches away from it’s narrow sides and comes complete with a total lack of guard rails, signs or any other form of safety measures. The road, built in 1916 by Russian Soldiers during the Trazibond campaign against the Ottoman Empire is always busy with local vehicles and has become notorious in recent years for its large number of fatalities.

The busy major highway BR116 stretches over 2,800 miles of Brazil and is the countries second longest road, but the 300 mile stretch that connects Sao Paulo to Rio Negro is by far the busiest section, and the most dangerous. The poorly maintained road, which is not consistently paved, is filled with a high concentration of tired and over-worked truckers. This combined with frequently changing weather conditions, the numerous deep potholes and sudden tight turns have all combined to leave this road dubbed ‘The Highway of Death’. As if all these dangers were not enough to contend with, travellers are frequently attacked by bandits and thieves while making their journey along the highway, which rarely has any noticeable police presence.

As we have seen, road maintenance is a vital factor in road safety, which perhaps explains why the delightfully named Fairy Meadows Road in Pakistan is quite so deadly, in spite of its serene name that gives no hint to the untold terrors that it can provide to the unwary traveller. This mountainside road has not undergone any significant repairs since first being built by local villagers of the Nanga Parbat mountains hundreds of years ago, and its high-altitude, lack of guard rails, steep inclines and huge virtually impassable sections make it less of a journey and more of an adventure for those few who are brave enough to drive along it. Even locals who use the road by bicycle tend to get off and walk for the worst sections and despite the naturally beautiful mountain vista view, the road is an undoubted and much feared death-trap with unpredictable weather conditions and frequent rockfalls.

Truckers are a tough bunch with plenty of high-quality professional driving experience behind them, but even the most skilled big-rig drivers are tested by the James Dalton Highway in Alaska. The 414 mile stretch of road, familiar to fans of the ‘Ice Road Truckers’ show that featured the perils of those employed to travel it, is one of the most isolated roads in the World with just three gas stations along its route. Icy gradients of up to 12% challenge the 250 truckers who use it daily to transport oil from the Prudhoe Bay Oil Fields, but frequent potholes hidden beneath the icy surface and flying rocks that can smash headlights and windscreens are also hazards that can lead to problems for drivers. A special permit is required to use the road and those that do are encouraged to bring survival gear, because a wreck out in this desolate wilderness can bring severe consequences for those unprepared for the freezing conditions, not to mention the ever present danger of hungry polar bears on the prowl for a tasty trucker treat.

China’s infamous single-child policy was an attempt by the authorities to control the countries incredible population growth, but The Sichuan-Tibet Highway, which links Chengdu Province with Tibet also contributes to population control quite extensively. The road is responsible for 7.6 deaths per 100,000 Chinese citizens overall and wrecked vehicles are a common site along it’s otherwise naturally beautiful surroundings. The high altitude road, which averages about 14,500 feet above sea level will often leave you gasping for air, not only because of the altitude, but also because of the frequent hairpin bends, rock-slides and incredibly divergent weather systems, which can range from freezing fog to mud-laden quagmires during the rainy season. You may also be unlucky enough to encounter the occasional traffic jam stretching for miles with thousands of cars at a standstill. The jams are notoriously dangerous as well as frustrating with fights, thefts and even kidnappings occurring amongst the stranded motorists.

Being commonly known as ‘The Road of Death’ should give a hefty hint to travellers in Boliva that the North Yungas Road is no relaxing drive in the country, but the crosses that frequently adorn the roadside throughout it’s forty two mile length will leave no doubt that this road is a natural born killer, so much so in fact that an annual death toll of up to 300 people led to the Inter American Development Bank naming it the World’s most dangerous road in 1995. The narrow single lane road is commonly used by large trucks and buses that frequently fall victim to the crumbling edges, resulting in a vehicle dropping off into the 2,000 foot drop to the rainforest below. The road is so dangerous that drivers are required to drive on the left hand side so that they have a better view of their outside wheel, which no doubt adds to the confusion caused by the frequent rain, fog and rockfalls that have left the road of death with sections that are quaintly named by the locals with handles such as ‘Slaughter Alley’ and ‘Dead Man’s Curve’.

So there we have it, ten of the most dangerous roads in the World today, so whether you’re just popping down the road for a bite to eat or taking the journey of a lifetime to the most exotic parts of the World, remember to keep your eyes on the road and don’t pay too much attention to the view. Always remember, there are bold drivers, and there are old drivers, but there are rarely ever old, bold drivers.