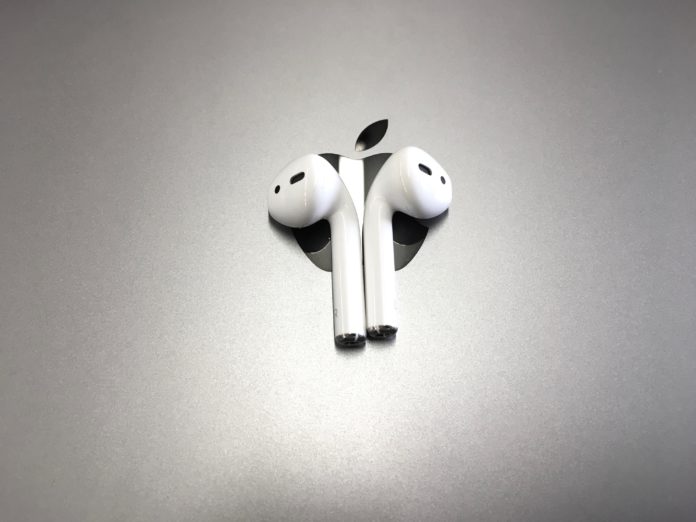 The iPhone 7 has no headphone jack. No. Headphone. Jack. That means you’ll have to use the bundled wireless EarPods or use an adapter for your trusty old earphones. Apple says that isn’t the future. Rather, they imagine we’ll all be wearing wireless earphones within a year or two. As I type this review, I’m listening to my Jaybird Freedoms, and I can tell you, Bluetooth earphones are the future. The question is, which Bluetooth earphones should you buy? Apple has an easy answer for that. The AirPods. Priced at $159, they’re one of the more expensive Bluetooth earphones, but they’re also one of the best. We’ll find out more in this review.

What Are These Airpods?

The AirPods are wireless earphones, and I don’t mean the wireless, with the wire connecting the two earbuds together, I mean true wireless. They’re two toothbrush heads stuck into your ears. They look a bit dorky now, but as they catch on, they’ll improve. The AirPods have Apple’s fancy new W1 chip, which makes first-time pairing a breeze with iOS. They have five hours of battery life, with an additional 20 hours with the included charging case. They’re exactly like normal EarPods, but have a thicker base for the battery and chip.

The AirPods are relatively new now, and rather expensive, so they definitely turn heads. The design is all around good, but not adventurous. They’re just EarPods with the wires chopped off. There are a few extra holes for the new built-in sensors, but that’s about it. At the bottom of the AirPods are dual beam-forming microphones, and a metal cap covers them, which allows the AirPods to be charged. Many people have noted they look like two toothbrush heads on your ears, but after a while, people will get used to it.

The AirPods are perfect in this department. Apple products are usually unparalleled in build quality, and these AirPods hold up. They’re rock solid, and almost everything is glued tightly together. Terrible for repairability, but good for durability. Even the case is built meticulously well. The hinge has a satisfying opening feel, much like a zippo lighter, and the hinge itself is sturdy, complete with a chrome metal finish.

These AirPods, when you first try them, they’re absolute magic. Apple has perfected the art of making you want something, and with these AirPods, it’s the ease and simplicity that draws you into them. When you first pair them, simply holding them near your iPhone or other iOS product will trigger a control panel-like pane, where there’s a simple one-button press to connect them. The AirPods know if they’re in your ears or not. When listening to music, pulling out one of the earphones will cause the music to pause, and placing it back in will make the music play again. It’s such a simple thing, but these little features make the using the AirPods seamless and magical. At its $159 price point, they’re not bad value, especially when compared with a lot of other true wireless earphones.

The AirPods also have touch sensors on both sides. When you double tap either side, you can either activate Siri or Play/Pause. You can configure it in settings, but it’s either Siri or Play/Pause. You can’t have one or the other, and even if you have no internet connection, Siri will pop up, excitedly announcing you don’t have a connection. Although it doesn’t work without an internet connection, Siri is still much more useful than play/pause. Siri can change songs, play/pause, pick specific songs, playlists, etc., whereas play/pause can only play and pause. With the help of the dual beam-forming microphones, Siri can hear you well, and works most of the time, even in louder areas.

With roughly the same shape, you’d expect the AirPods to sound exactly the same as EarPods, and for the most part they do. However, there are small tweaks on both sides of the frequency spectrum. On the low end, it’s clearer and less boomy, and at the top end, there’s more sparkle. Putting on the AirPods felt after listening to the EarPods felt like a wall was removed between the music and my ears. Compared to the EarPods, the AirPods are more natural sounding, and overall more detailed. This is a great thing, as EarPods weren’t known for their clarity. They’re a noticeable upgrade from the EarPods, but for $159, it’s uninspiring. At this price range, you can find earphones which sound leagues better than these, but sound quality isn’t the focus of the AirPods.

These AirPods were designed for ease-of-use and convenience, not for Hi-Fi listening. However, since the AirPods are open-backed, they also output roomy sound, something you don’t often find on in-ear monitors. Overall, they’re a good set of earphones, but don’t expect to be able to throw away your Hi-Fi headphones.

The AirPods have the same shape as the EarPods, so if the EarPods fit you, chances are the AirPods will too. They’re a one size fits most, so there aren’t any first-party customisation options if they don’t fit you. Since they don’t provide a seal, they sit in your ears without exerting any pressure. This means that the AirPods are extremely comfortable, and there was no fatiguing on my ears, even after hours and hours of listening. For me, they fit perfectly, and the optimum sound was easy to achieve, but for others, it may be a different story.

Much like the EarPods, the AirPods provide no isolation whatsoever, which makes them less than ideal for use on the metro, or in a crowded area. You can buy 3rd party accessories to make them fit more snugly, but they hardly help with isolation. This is partly due to the lack of a seal, but also because the entire unit is open-backed. Being open-backed allows for better bass response, but it also means that isolation is completely lost. There’s also leaking from the inside out, so people around you can hear what you’re listening to. This usually only happens when you pump up the volume, but because of the lack of isolation, you may find yourself doing this more often than normal.

Where are my AirPods?

Since the AirPods are wireless, they’re far easier to lose than the normal EarPods. As such, I’d recommend keeping them in the charging case at all times. Even so, both the AirPods and the case are made of a super-slippery white plastic, so they can still fall out of your pocket. If you do end up losing your AirPods, you can use Apple’s “Find my AirPods” app, hidden in the “Find My iPhone” app to locate your AirPods. Keep in mind that this only works if the AirPods are currently connected to your phone. If you lose your AirPods, Apple will sell you replacements. At $69 each, they’re not cheap, but at least it’s better than having to buy another whole set.